Saturday, February 12 the Delaware County Winter Raptor Survey completed the western route of the county. We did the eastern portion on January 15 and managed to find 10 species of raptors. members besides me were Al Guarente, Chris Pugliese, and Bob Kelly. We logged 86 miles from 10 am to 3 pm. We started at Rose Tree Park and covered portions of Newtown Square, Ridley Creek SP, Delchester Rd, the Darlington area, Glen Mills, Fox Valley, Brinton Lake, Chadds Ford, Garnet Valley, Neumann College, Linvilla and Elwyn. We found only 6 species of raptor in contrast to the 10 found on the eastern route. The airport (harrier), Commodore Barry Bridge (peregrines) and our sleeper industrial park (Merlin this year, Great-horned Owl in 2009) seemed to make the difference on the eastern route.

The western route although more scenic, was homogeneous and heavily snow covered.
An industrial park helped us again! We came upon 21 Black Vultures roosti 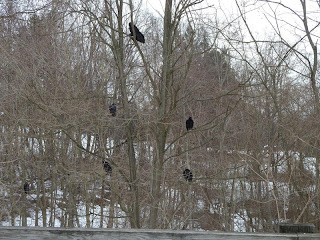 ng in some trees at eye level inside the Newtown Square Corporate Campus. 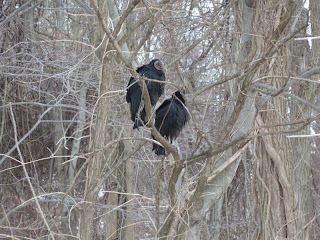 Black Vultures- Newtown Square. Faces only a birder would love
The Newtown Square vultures made it a banner day for Black Vultures. We counted 45 which combined with the 15 we found on the eastern route beat the 48 counted in 2008.
We also counted 78 Turkey Vultures which brought the county total for this year to 97 which may be a new high but I don't have all the records.
Red-tailed Hawk counts however may be down this year. Greg Grove, the WRS coordinator state-wide, speculates that the snow cover may have something to do with it. We'll see when the totals come out. 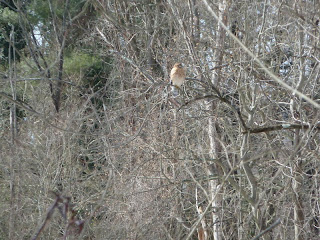 Another highlight was this gorgeous Red-shouldered Hawk spotted by the sharp-eyed Bob Kelly in Ridley Creek SP.
We also came across a Red-tailed Hawk sharing lunch with a Turkey Vulture on a road-kill deer near the Dilworthtown Inn (yes, that's right).
Speaking of lunch our only accipiter of the day was a sharpie circling the Chick fil-A restaurant at 202 & 1. WE shared our lunch with 5,000 6 year olds (or 6,000 5 year olds) at Jimmie John's restaurant on 202.