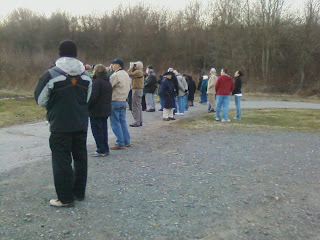 This year, the BCDC joined the West Chester Bird Club in their annual Woodcock Walk at Marsh Creek State Park in Chester County on Sunday, March 13, 2011. This event offered birders the chance to catch a glimpse of the spectacular courtship rituals of American Woodcocks.
The twenty-nine eager birders, that patiently waited for the show to begin, were not disappointed.
At approximately 7:29pm, the first "peent" was heard. Shortly afterwards, a woodcock silhouetted in flight against the warmly lit western sky, gave us hope that the "sky dance" would soon begin. We had to wait a few minutes more, but eventually did get to see and hear the male woodcock's courtship flight and accompanying whirs, chirps, and peents. It was agreed among participants that up to four birds were present. Though the show didn't last very long on this cold evening, birders seemed pleased and satisfied to have witnessed such a special spring ritual in the world of the American Woodcock.
Photograph courtesy of Mary Bleecker
Posted by Holly at 9:42 AM