You may recall that I had posted back in March about a pair of Red-shouldered Hawks nesting in my neighborhood here in Downingtown, Chester County.
The exciting news is that after approximately 33 days of incubation, on April 25, 2011, it appeared that at least one egg had hatched ! This could be a state record for the earliest hatching date documented for this species in the state of Pennsylvania.
While it was tough to confirm exactly what was going on in the nest, the behavior of the adults suggested incubation of eggs was no longer occurring. On April 24th, I checked the nest to see if I could detect any position changes of the adult. The bird was still set down low in the nest, just the head barely visible above the rim of the nest, as seen with the spotting scope. This is the position we'd been noting since we believe incubation started. The nest was very quiet, and the property owners, Mark and Catharine and kids, wondered if the hawks were still around.
But, during a return visit on April 25th, I noticed that the adult Red-shouldereds started to behave differently. When an adult (they both share incubation duties) was sitting in the nest, it was positioned higher, suggesting perhaps there was a chick underneath along with some unhatched eggs (they don't all hatch at once). The adults were also seen perched on the rim of the nest often--something not noticed from March 23 through April 24. 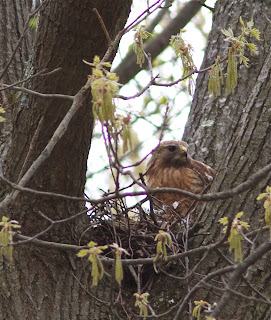 Adult on the rim of the nest, April 25th, 2011
From this day forward, increased activity around the nest was noticed, and adults became very vocal and active around the neighborhood once again. For three weeks following April 25, it was hard to see chicks in the nest from the perspective we have on the ground.
But, on May 19 I got a call from Catharine who said she could see one of the chicks peering over the edge of the nest! I was able to grab a few photos that day, and confirmed at least three chicks are in the nest. Adults were also seen at seven to eight minute intervals feeding young. 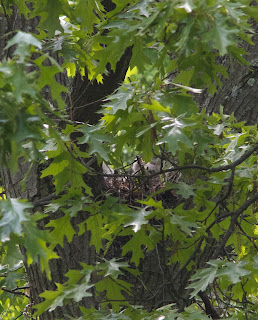 From the street it appears that three little heads are bobbing in the nest! 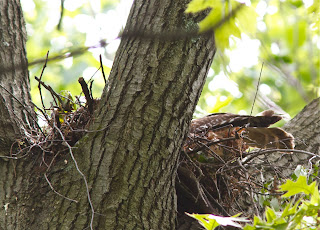 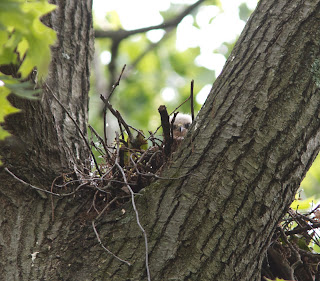 Red-shouldered Hawk chicks peek over the rim of the nest. The hawks are believed to be about 24 days, or a few less, of age.
May 19, 2011
One week later, at approximately one month of age, the chicks are looking a bit more mature, and are showing some brown feathers on the wings if you look closely. They also seem more confident, and spend more time looking around and taking note of their surroundings. The adults continue to remain vocal, and very active feeding the young. I have seen them in various areas of the neighborhood hunting, and spotted one of the adults carrying a snake towards the nest. 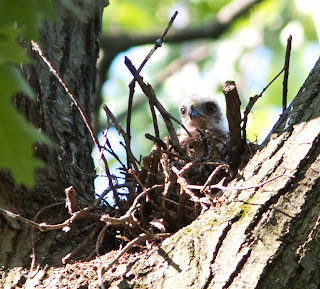 Red-shouldered chick at approximately one month, or 30 days of age, peers over the rim
May 25, 2011 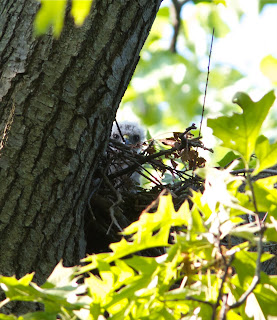 A second chick sits on the right side of the nest, and seems interested in it's surroundings. A third chick, which sits in the middle, is obstructed from view for the camera.
May 25, 2011
Baicich and Harrison's book A Guide to the Nests, Eggs, and Nestlings of North American Birds, states that the young will leave the nest at 5-6 weeks. If my calculations are correct in the age of these chicks, that could be happening in the next week!
Stay tuned.... 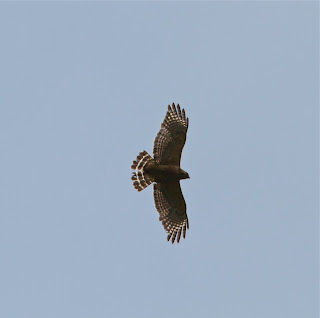 Adult Red-shouldered Hawk flying over my driveway...Likely on it's way to find some prey for the hungry chicks
Posted by Holly at 9:24 AM