Turkey Vultures nest throughout the Delaware Valley, but birders seldom see or hear of a nest being found. Both vultures nest on the ground often not providing so much as a scrape for their eggs. They are attracted to cave-like settings which could be a small opening in a rock wall (see Al’s 6/26 blog) or a tumble of boulders, an unused building with two openings, or vegetation that is so dense, it acts like a cave. Such a vegetative structure, a “green cave.” occurred at our banding site at Rushton Farm in Newtown Sq., just north of Okehocking Preserve on Delchester Road. 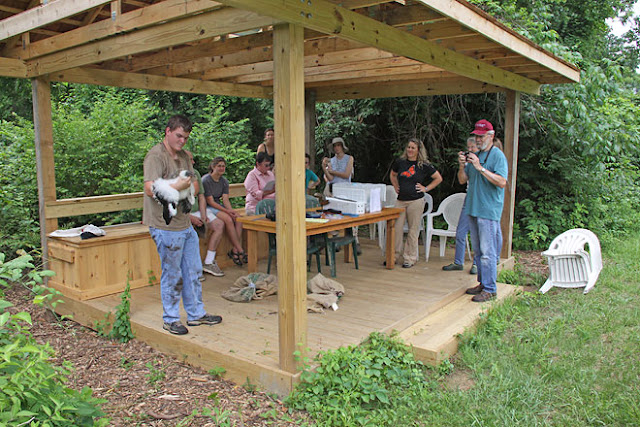 Bracken Brown with Turkey Vulture chick at Rushton Farm Banding Station
All photos by Adrian Binns
Several Turkey Vultures were in the trees as we were tending mist nets each morning in April. We assumed they were attracted to carrion in the woods. After many days during which even a deer would have been devoured, one bird occupied a snag for many hours and when we passed mist net #6 another vulture often flew out from the shrubbery. My banding partner Lisa investigated the area and found two large eggs with camouflage markings. We immediately changed our route to and from net #6 to protect the nest. We also wanted to avoid leaving our scent which might lure predators. Ha! The strongest human spoor is no competition for the droppings and regurgitated carrion surrounding a vulture nest. Lisa’s German Short-haired pointer went ‘on point’ in front of the entryway. After a few seconds, he wrinkled his nose and trotted off. No fool that dog! Those chicks would be safe from all but the most desperate predator. They have a menacing hiss and painful bite. 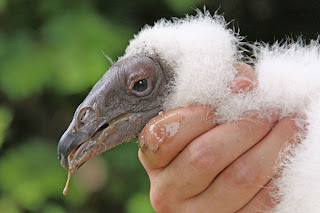 36 day old chick regurgitating as a defensive action
On 5/19 Lisa found two tiny yellowish-white fluffy chicks. I contacted my friend Bracken Brown,one of the top vulture banders in North America, who works under the direction of David Barber at the Acopian Center for Conservation Learning at Hawk Mountain Sanctuary. As part of Hawk Mountain’s large vulture research project they wanted to band our chicks when they were about 5 weeks old.

On 6/23 Bracken and Dave Barber grabbed some burlap sacks and entered the green cave to capture our chicks. Both birds were carefully collected and taken to our banding shelter. Vultures defecate on their legs as a cooling strategy. Therefore, metal bands cannot be used. In their place a large plastic tag is attached to the carpal joint showing a color, light blue for our area of PA, and a three digit number, in this case 301 and 250. 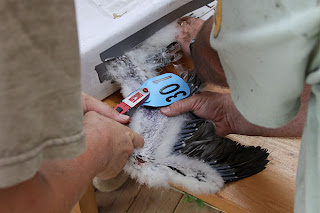 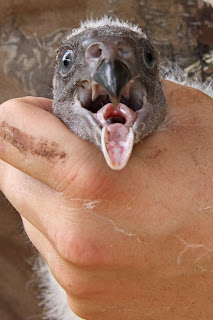 Note the hole in the tongue which allows breathing while large food items are swallowed. 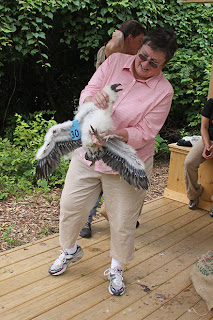 Doris thought the chick was a all fluff, but it weighed almost 5 pounds!
The chicks were checked, measured, weighed and admired before being returned to their green cave. The parents were not present and presumably didn't know the adventure their kids had while they were ‘home alone’. 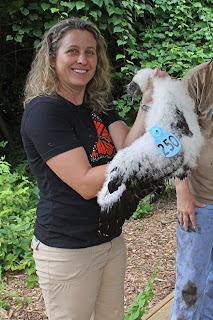 Lisa Kiziuk of Willistown Conservation Trust with chick #250
Be on the look out for light blue vulture #250 and #301. Report your sightings to Hawk Mountain to contribute to our knowledge of vultures and their movements.
Posted by mcgovern at 3:48 PM