If you were following the blog last spring, you might recall that I posted about a pair of Red-shouldered Hawks nesting in my neighbors, Catharine and Mark's yard, here in Downingtown area of Chester County.
Three chicks successfully fledged in June of 2011.


I was anxiously awaiting the arrival of winter/spring 2012 to see if the pair might re-use the nest, and they did indeed!


The adults were seen near or sitting at the nest site in the mature oak tree often in February. This seemed to be a favorable sign for nest site fidelity.


By March 13, I was seeing an adult sitting on the nest, where only the tail was visible...This would be ten days earlier than last year's 3/23 presumed incubation start date. Since we had a mild winter, the earlier nesting date was not terribly surprising. That said, it may be one of the earliest, if not the earliest ever, record for nesting documented here in Pennsylvania (last year, I found out there was a site in Bucks County that was one day earlier in hatching than our 3/23 date). 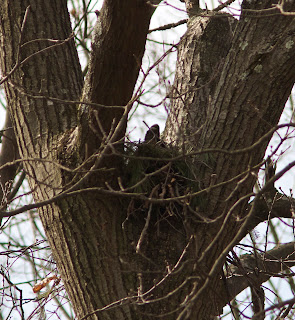 March 13, 2012. A Red-shouldered Hawk sits on the nest with only the tail peeking over the tip. This seems to indicate that incubation has begun.


On March 17, I spotted the two adults in a tree nearby. They were only there for a few minutes, when one flew back to the nest to resume incubation.

On April 15, I noticed the posture of the adult sitting on the nest had changed. The bird was still in the nest, but sitting higher, and not in an incubation posture. It is impossible to tell if there were chicks in the nest, but this change is a hint that something was going on.


On April 20, I watched on of the adults bring a small gray rodent to the nest, while the other adult was sitting in the nest. The one adult ripped apart and ate part of the rodent (vole?), then flew off. The sitting bird sat on the rim and ripped the prey up more, took a few gulps, and appeared to be carefully shredding the animal. I thought it was very possible the bird was also feeding very young chicks, but it was impossible to determine. 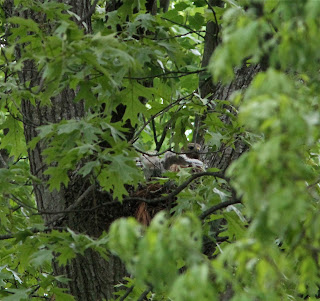 In this image, the chick is facing the parent bird, as it stretches it's wings out and shakes it's tail.


It will be fun to monitor the growth of these chicks again this spring. With the leaves fully grown in now, it's going to make viewing and photography a bit trickier. That said, if I get some decent images, I will post again with updates!