When you think about Christmas Bird Counts in our neck of the woods, you conjure up images of cold, overcast days, flitting chickadees and kinglets, wood edges busy with scratching juncos and sparrows and Red-tailed Hawks and Turkey Vultures patrolling the skies. One doesn’t usually think of warblers.

Okay, we all hope to find that rare warbler that’s been found only once or twice on previous counts, but, if we’re lucky, we usually settle on finding a Yellow-rumped Warbler. When we do come across a warbler on the count it brightens up the day, especially if there is a flash of yellow or bright green against a gray or snowy background.

In the ninety-five year history of the Glenolden CBC, eleven warbler species have been recorded. A high of six species were found on the 1983 count and five species were recorded on five counts.

Before reading further, here is a list of warbler species found on the Glenolden CBC so far. Of course, on this list, Yellow-rumped Warbler has been found most frequently, but see if you can figure out how the remaining ten species rank in frequency.

Species recorded on the CBC listed by frequency of occurrence.

Yellow-rumped Warbler – This is the default winter resident warbler in our area. It has been recorded on 62 counts with an amazing high count of 63 in 1984. Even though these birds are quite numerous in November, their numbers decrease quickly as winter progresses and by January they can be down right hard to find.


Common Yellowthroat – Has been recorded on 33 counts beginning in 1940 and is mostly found in the Coastal Plain portion of the count circle usually along the Delaware River or Darby Creek. In Delaware Co., there are few January records and I’m not aware of any February sightings. The eBird map for December (all years) show the occurrence in the east from Maine to Florida with higher concentration (darker purple) from the Carolinas south.


Palm Warbler – This species winters regularly from coastal southern MD southward, so it is not surprising that it has been recorded on the CBC 14 times. What is surprising to me is that it has not been recorded more frequently. Highest total so far is 13 in 1999, which I think will be hard to top. Once again, most reports are from the Coastal Plain. The eBird map shows a heavy concentration in Georgia and Florida with declining numbers northward. With these concentrations in the east, I would expect Palm Warblers to be found frequently.

Pine Warbler – A fairly common and regular winter resident in small numbers from southern Maryland to Florida and westward to Texas. It has been found on the CBC twelve times since 1974 with a high count of three in 2010.
They have been found both in the Coastal Plain and the Piedmont portions of the count circle. December occurrence in North America is heavily concentrated in the southeast especially from the Carolinas to the Gulf states.


Yellow-breasted Chat – A rare winter resident along the eastern seaboard. Found on the CBC eight times since 1953 with a high count of two also in 1953.
There are a few additional records in the count circle for December and January, but no records for February and March. This species can sometimes be secretive but responds well to squeaking and pishing, so I don’t think it is being overlooked.

Orange-crowned Warbler – Rare winter resident in the mid-Atlantic states becoming more common in the Carolinas and especially in Florida and along the Gulf to Texas.

With the high concentrations of this species along the coast and in the southeast, I would expect more occurrences, but, this is a skulking drab green bird and can be overlooked, so it’s a great day when one is found.

Usually, if any warbler species is found on the CBC, it is generally one from the group above.

These next five species have occurred on the count four times or less and we should consider ourselves extremely lucky to cross paths with one of them in mid-December. Having said this, these five species all winter in small numbers in Florida, so potentially we haven’t seen the last of them.

Ovenbird – This species has been found on the CBC four times. The first sighting was of a bird feeding on a peanut butter log in a backyard in Swarthmore by Helen McWilliams and Lynn Mitchell in 1978. 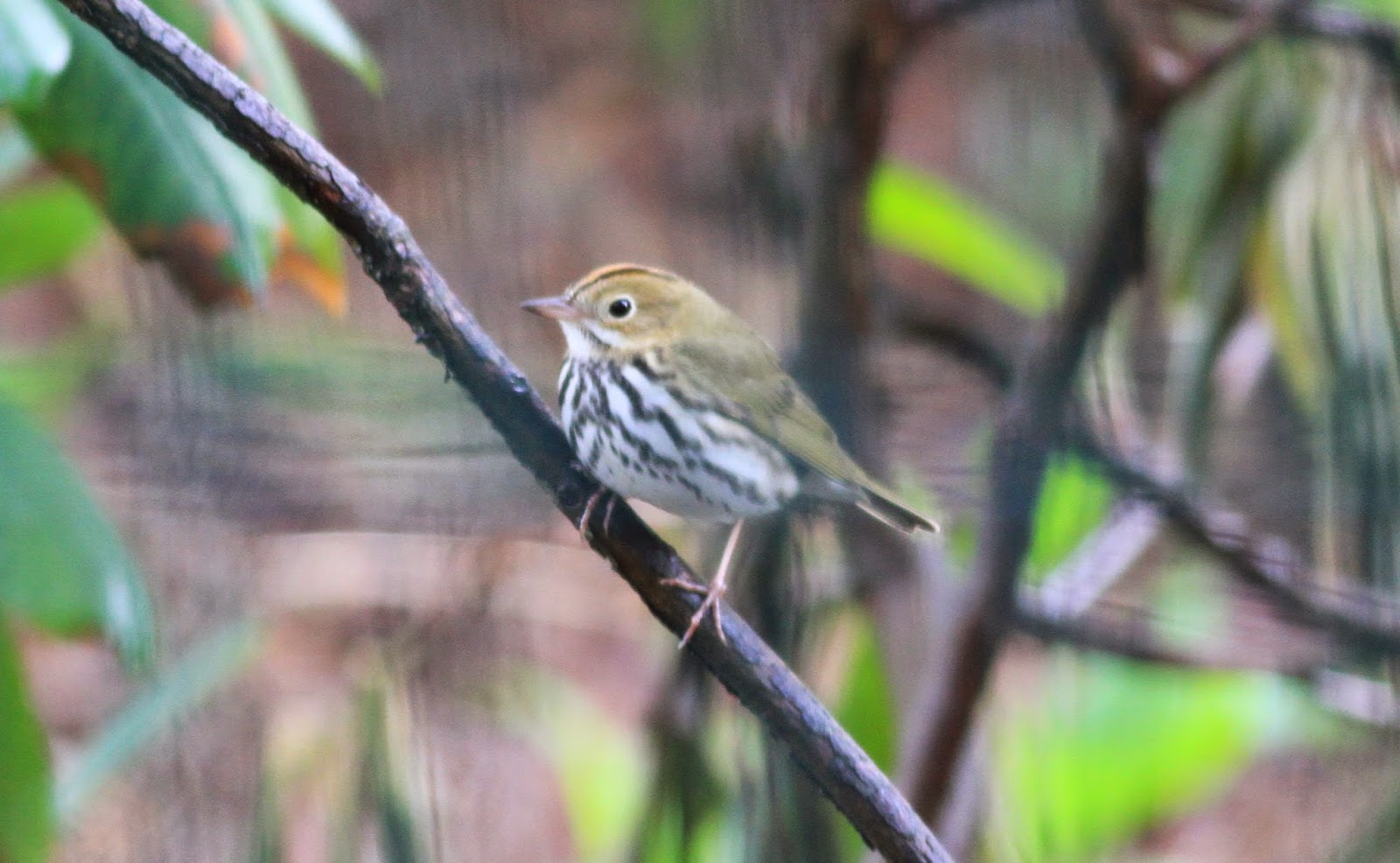 An astonishing two birds were found at feeders in 1984, a single bird was on the 1987 count and another was found at a feeder in Media by Grace Felton on the 1991 CBC. Ovenbirds winter in small numbers in Florida but become scarce north of there.

Black-and-white Warbler – Single individuals have been found twice. The first was found by yours truly as the bird was feeding in a brushy edge with a flock of sparrows in Woodlyn, Ridley Township. Needless to say, I was stunned and being a teenager without a camera I knew there was no way it would be accepted. It was and I was thrilled.
I think the fact that I also came across a Snowy Owl earlier in the day and that some of my mentors at the time got to enjoy it, played in my favor. It was the first and only time I’ve seen a Black-and-white Warbler and a Snowy Owl in the same day.  The second report was of a bird found in Media on the 1983 count. Once again, this is a species that winters in the East in small numbers from about the Carolinas south and can very well turn up on the CBC again.

Black-throated Green Warbler – Single birds have been found twice. Erica Brendel, Ed Fingerhood and Chris Walters discovered the first on the grounds of Elwyn Institute in 1994. An excellent description and drawing were submitted which eliminated the similar Townsend’s and Hermit Warblers.
Doris McGovern and Noel Kelly found the second bird at John Heinz NWR on the 2012 CBC. The eBird map shows a fairly restrictive winter range mostly in Florida and the Texas Gulf coast and Rio Grande Valley. Single birds have appeared on many of our neighboring counts and this species is still passing through our area in mid-October, so despite the restrictive range, it may appear again.

Nashville Warbler – This species has been found once on the 1999 CBC. Sharon Pulcinella and I found it as we were driving by some dilapidated buildings in Marcus Hook. We saw some flashes of yellow fly across the front of the car and we immediately pulled over and checked it out. We saw a small group of birds feeding on some insects on the sun drenched warm wall of one of the buildings creating a favorable micro-habitat. At once, we saw a few Palm Warblers and then another bird with bright yellow underparts a greenish back and a definite eyering. Not only were we elated with the Nashville but we also thrilled with six Palm Warblers.


The eBird map shows a concentration of sightings in Florida and Texas, but, there is also a cluster of early December records in the mid-Atlantic, so there is a good chance we will see it again.


Wilson’s Warbler – This is another warbler that has been discovered on the count only once. A team of birders from the Academy of Natural Sciences of Philadelphia covering the John Heinz NWR on the 1983 CBC found it.

This species, as shown on the map, winters in Florida, the Gulf states and southeast Texas. We might have to get lucky to find another.


Warblers on nearby CBCs.

A number of our neighboring CBCs have also recorded multiple warbler species, including some that have not been found on the Glenolden CBC. The following warblers have been documented on nearby counts but not the Glenolden CBC yet.

Northern Waterthrush – Audubon CBC (includes parts of Chester & Montgomery Cos.). The eBird map shows a very restrictive winter range in North America. The range is mostly Florida, Texas and the Gulf coast. This one will be hard, but still possible.

Kentucky Warbler – Elverson CBC (includes parts of Chester and Berks Cos.). This one is real mind-blower as it doesn't winter in North America. Chances are very, very slim for a repeat performance.


I'm a bit surprised that this species has not yet been recorded on the Glenolden CBC. It winters regularly in Florida and I would think a late, straggling migrant might turn up within the count circle.

This is definitely a species that can show up on the CBC. This bird winters in Florida and is one of the later fall migrant warblers to pass through our area. I have one record of a single bird on December 6th in the Crozer Arboretum, Upland.

Another real zinger. Very rare in North America in December and I think there is very little chance that it will make an appearance.

Yellow-throated Warbler - Southern Lancaster Co. (includes parts of Lancaster and Chester Cos.). I'm surprised this species has not yet been on the Glenolden CBC. They winter in good numbers in the southeast and can be very late fall migrants through the Delaware Valley.


There are also four additional warbler species that winter in FL and the Gulf Coast but have yet to be recorded not only on the Glenolden CBC but on any of the neighboring counts.

Northern Parula - As you can see from the map, this species winters throughout Fl and northward to SC and west along the Gulf Coast.

Because of that, I suspect that there is potential for this bird to show up on the Glenolden CBC

Magnolia Warbler - A species that winters in south FL and east TX and is also a bit of a late migrant through our area could possibly be a candidate for the Glenolden CBC. A single Magnolia Warbler was found on the Cape May CBC in 2014.

Yellow Warbler - I'm surprised this bird has not yet turned up on the Glenolden CBC especially since there has been a December report from John Heinz NWR and a mid-January record from the Philadelphia Mid-Winter Census.

There is some thought that these very late Yellow Warblers may be of the duller Alaska race rubiginosa which are still migrating through our area from parts very far north.

Posted by Nick Pulcinella at 6:14 PM