This was the winter of my discontent - NOT!

Some of you are aware from my emails that my wife Jill and I spent the winter in Scottsdale. I was happy to make the sacrifice so someone else did not have to. You may thank me later. Arizona offers great birding opportunities, as you know, particularly if you are willing to do a little chasing and travel to the southern parts of the state. Here’s an account of the fifteen (fifteen!) lifers I got in Arizona, and on my return trip back to Pennsylvania through the lower Rio Grande valley of Texas.

I got this Phoenix area specialty one day when I read an eBird post from a birder who had seen it in the morning and posted promptly. I drove over to the spot and they were still foraging in the trees where the eBirder had reported them. The lovebirds are not rare in the area, but if you don’t have their nest sites staked out, you just have to kind of run into them in the course of your daily travels, Over several months, I did this, eventually learning their call and flight characteristics. Those suckers can move! Indeed, the silhouette and speed are pretty good field marks. Near the end of my winter stay, I found a pretty large nesting colony of them in a local shopping center, and was able to post it to AZNMBIRDS, so others could find the bird easily. If I do this right, there should be a photo of the bird on one of their nesting trees below. You probably have to take my word that they’re RFLO. 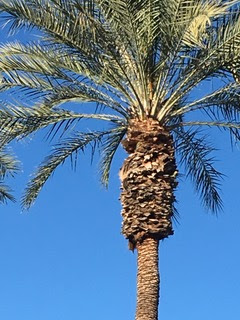 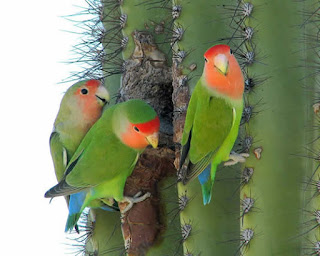 
This bird has wintered in the same Scottsdale municipal park for at least two winters. It was while trying to stake it out - I later determined in the wrong park - that I read about the lovebirds on eBird. I returned the next day, this time to the right park, and got the bird. Cell phone photo below.


At Veterans’ Oasis park in Chandler, AZ, A Groove-billed Ani got photographed by a non-birder who decided to show his photos to a birder friend. This, of course set off a round of twitching which lasted for the few days that the bird stayed around. I still didn’t have a decent camera, so you’ll have to rely on my word that the cell phone photo below is of the ani, and not a grackle.

It was time for a road trip. Jill and I headed for Portal, AZ, where this bird appeared to be settling in for the winter at the well-tended feeders of Bob Rodrigues, a retired Forest Service worker who spent his career in Alaska, but decided that 22 hours of darkness in winter wasn’t his ideal retirement environment. Bob is generous enough to invite the public in to view his feeders, and through his efforts, the bird stayed all winter, and many birders ticked this species off their lists. I got no photos, but you can see some of Bob’s here: http://tinyurl.com/lh624sh

On Thanksgiving Day, I checked AZNMBIRDS, and a male Ruddy Ground-Dove was seen in a Tempe park at about 8 AM, associating with Inca Doves. I couldn’t leave for a few hours, but I got there around noon and the brightly colored bird was right where the poster said he’d be, and I added another lifer. I even returned with Jill the next day, and it was still there. (no photos)

I had previously tried several times for this bird at Catalina State Park, near Tucson, but come up short. The same (presumably) bird had been present in the same park last year, when fellow BCDC member Nick Pulcinella tried and missed it because he arrived on a day when large crowds were present for an event. This is a very popular park, and is busy on weekends. Two different birds started showing up at a house in the Santa Cruz Flats area northwest of Tucson. This is a large agricultural area and is very productive for birds, especially raptors, in winter. Anyway, the birds were appearing regularly, so I made the 90 minute drive to the area to be rewarded with great views and my sixth lifer of the trip. A bonus - while viewing the thrush with some local birders, some Inca Doves came in for a drink at the resident’s hose, which was dripping a bit. Accompanying them was a beautiful male Ruddy Ground-Dove! 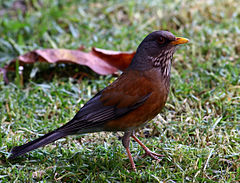 In Tubac, AZ - a town between Green Valley and Nogales, which is on the Mexican border, A male becard started putting in regular appearances, though short ones. I got up early and joined a group of birders waiting to stake it out in its usual spot at the usual time it showed up, and it appeared for a few minutes, as if keeping to a regular schedule. The beautiful bright collar was easily seen, even at a distance, so there were a lot of satisfied birders.

Lifers 8 and 9 - Buff-breasted and Tufted Flycatchers

A pair of Tufted Flycatchers, a mostly Central American species, showed up at Carr Canyon - right on the border with Mexico. The bird was being seen at a campground at the top of a winding dirt road, which, fortunately for me, had just been regraded, making it pretty easy to negotiate, even with my minivan. In the few days before I made the trip down there, Buff-breasted Flycatchers also began showing up, making it a chance for two lifers. This was near the end of March. I traveled down there, along with enough gear for an overnight, in case I needed another shot at it the next day. As I drove south, that seemed to be a distinct possibility, because the temperature was dropping, the sky was increasingly black, and it began to rain, which I thought would be snow at the higher elevation where the birds were. When I arrived, however, the weather had improved considerably. As I suspected, there was some new snow at elevation. As I got out of the car, I made the acquaintance of a few AZ birders who had arrived to find the Tufted Fly. We walked the area, and another couple of birders pulled up to do the same. The man of the pair came up to me and said, “Hi, I’m John Harding.” I replied, “John, it’s me - Carl Perretta!” John is an old birding friend from the Philadelphia area who wrote the book, “Birding the Delaware Valley Region.” I have a copy on my bookshelf. He is a long-time DVOC member, and may even have been a BCDC member at one time. He and his wife Eleanor had flown in from Philadelphia for the Tufted Flycatcher, which he had missed on an earlier trip to SE AZ. It was like old home week, and a pleasant surprise for both of us. John said he was looking to make the flycatcher number 760 for his North American list. Of the nine birders at the campsite looking for the bird, five were from Pennsylvania. As we waited and searched, we observed anything that flew into view. That’s when I got my Buff-breasted Flycatcher. One nice thing about this bird is that for an Empidonax, it is pretty easy to ID by sight, with its distinctive coloring. As we sauntered around the area, a small bird flew in and actually perched on a rock. It had a very noticeable crest, giving it an almost titmouse-like appearance. It was the Tufted Flycatcher. With my brand new camera, I was able to get a couple of shots that won’t win any prizes for artistic merit, but which were good enough for documentation purposes. They were practically the first photos I ever took with the new camera my wife had bought me for my birthday. I’ll include one here.

This was truly a gift. A White wagtail - an Asiatic species - started showing up at a small sewage plant in the town of Ajo, AZ on March 29. Ajo is about two hours south of where I was staying in Scottsdale. We were going to start the drive back to PA on April 1. I waited one day to see if it stayed, and it did. It was reported on March 30. This gave me exactly one day to see it before I had to leave. I rose in the dark on March 31, and started the drive to Ajo in order to arrive at dawn. I got to the ponds before the sun was up, along with a husband and wife from Mesa, who were also there for the same thing. As the sky lightened slightly, the woman from Mesa said, “There it is.” I was able to get on the bird immediately, and got my 10th lifer of the trip. She posted immediately to eBird. The time was 6:19 AM. I fired up my new camera, and again got a few documentation quality shots. The bird had shown up so quickly that I was back in Scottsdale before 10 AM.

Few things are more unsatisfying than that pesky “heard only” section of your life list. This bird was a long term resident of mine. With Nick Pulcinella and Al Guarente, I heard this bird distinctly many years ago when we birded the lower Rio Grande valley. I saw it fly away at a distance then, but it could have been a titmouse for all I knew. Fortunately, the bird has a pretty distinctive call. As Jill and I were returning home through Texas, I was determined to add this not-particularly-rare bird to my list of seen birds. Because Nick had recently been through the area, and because he has more experience there than I was, I was able to use him as a valuable resource. Nick recommended Estero Llano Grande State Park as a great destination, and he was right. The ranger there told me where to find a pair of tyrannulets that had begun a nest. He had actually roped off the area with caution tape to keep birders and photographers from disturbing the birds, but if I kept a respectful distance, I could observe and photograph them. The result is below, and I’m particularly proud of it. Also at the park I got some pix of Clay-colored Thrush. That’s the nice thing about going back to an area like this. You get to see birds again that you’ve only seen once or twice.

Nick told me about a roosting area in McAllen where the birds gather by the hundreds, right before sunset. I got some stills and video.

These I got by paying the fee to enter the famed King Ranch on a tour for birders. A knowledgeable docent drove us around in a van to the spots on the ranch which are known to provide habitat for many great birds. At our very first stop, where we were simply to leave our cars, the guide got excited and said, “Audubon’s Oriole!” She had heard one and turned around to see it in a tree. Even she was rather excited, as this was not an expected species for the trip. I was very satisfied because I had seen one on my earlier trip to Texas, but it was on the wrong side of the Rio Grande! If I kept a Mexican list, it would have been one of the few members. As we searched the parking area, one of the group spotted the real prize - the Ferruginous Pygmy-owl. I got a few less-than-perfect shots, but one shows the eye-like spots on the back of the head. Tropical Parula got added in several other places on the route. It sounds very similar to its  Northern cousin.


I still have a target list for Arizona, and I’m hoping to make a dent in it in future years. Red-faced Warbler, Greater Pewee, Black-capped Gnatcatcher, and Rufous-capped warbler are just a few names.