On our second day we left the Green Valley Best Western and drove about 20 minutes to Montosa Canyon. Reports were coming in that a pair of Five-striped Sparrows were seen there. If this was true then our previous trip to California Gulch would not be a total loss. As we headed up into the canyon we came upon the Whipple Observatory. It is a radio observatory not a telescopic one. They had four large radio wave dishes around the property. We tried to go in for a visit but the facilities were closed even though the sign in the door said they were open.

On the observatory property we found this Varied Bunting perched in an Ocotillo.
We arrived at the canyon fairly early in the morning because the Arizona midday temperatures are quite unbearable at the lower elevations. After the observatory the road is unpaved and the reported site of the sparrow was about 200 feet past the stream crossing. What is it with Arizona and having to cross over streams on dirt roads? Anyway, we know immediately that this is the spot because a few other birders are already standing around. I get out and ask if the sparrow has been seen and was told it was there about 2 minutes ago. So I walk around to the hatchback and get out the bug spray while Sharon goes to talk to the men standing around. All of a sudden I hear "There it is in the low bush".  I came running around the car to hear Sharon tell me that she saw the bird and it just flew off. You gotta be kidding me right? She suggested that we leave then:) Happily, within a few more minutes I could hear the Sparrow singing and was able to track it down.

Other birds in the area were Canyon Towhee, Black-tailed Gnatcatcher, more Varied Buntings and Bell's Vireo. After the other folks there got ample views and photos we talked to two birders from Arkansas who were headed down to see the Rose-throated Becard at Tumacacori - DeAnza Trail. We told them that we would probably see them there since that was our next destination also.
On the way to attempt to see the Becard, we made a quick stop at the Amado Wastewater Treatment pond. This was an easy stop since we could view the pond from the roadside and didn't even have to get out of the car. Before we even raised our binoculars we could see our target bird, an immature Brown Pelican. Imagine that: a Brown Pelican in the middle of the desert. Are you kidding me? We also lucked out and observed a family of Black-bellied Whistling-Ducks with new fledged babies on the pond.


Still on our way to the Becard we discovered this bizarre little restaurant which was for sale if anyone is interested.
We arrived at the Juan Bautista de Anza Trail and met up again with the folks from Arkansas. 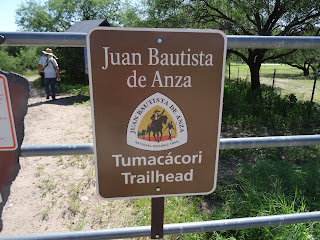 They had already gone in to see the Becard but couldn't find the exact area so they were back in the parking lot asking other birders for better directions. I had directions in my car but just decided to follow them instead. So off we went. After viewing a few other birds along the trail we started lagging behind and eventually lost sight of the Arkansas guys. Now we had no idea how to get to the nest area. It was already quite hot and I didn't want to walk all the way back to the car so we roamed around in the woods awhile until we heard voices. Even then we couldn't figure out had to get to those voices. Luckily some workers came by on a cart and I asked where the  bird was and they gave me the general directions but we still had to hunt and peck our way down different trails until we found a small crowd in the woods. They were on the bird when we arrived and fortunately we were able to see this Mexican wanderer. 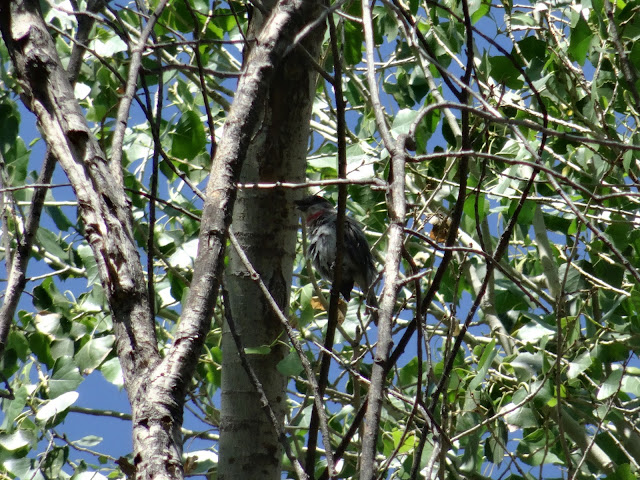 After finding the Becard, which was new for me in Arizona, we decided to take a break from birding for a little while and headed down the road about a block and came to the Tumacacori National Historical Park. The park protects the ruins of three Spanish mission communities. 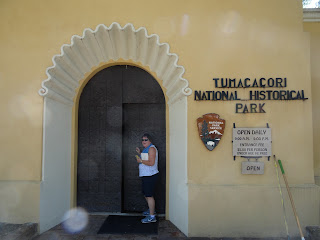 While on site we stopped to look inside the mission and discovered it was being restored so we couldn't walk through it but instead one of the team members who were working on the restoration came up to talk to us. She described what they were doing and told us that they were graduate students from the University of Pennsylvania. Well they were quite surprised to find out that we too were from the Philadelphia area.


After we finished at the mission we headed back north to the town of Tubac for lunch. Tubac  is  mostly known as an arts colony, but its centerpiece is the Tubac Presidio State Historic Park.When the Spanish first came to this region, they built a presidio (fort) at Tubac and a mission 3 miles south at Tumacácori. Although they struggled mightily to hold on to these remote outposts, in both cases the Spanish were chased out by Apaches. Today, you can spend a day leisurely perusing the Park's exhibits and exploring the 100+ galleries, shops, and restaurants of Tubac. We did indeed spend time at one of their restaurants, Shelby's Bistro, which I would recommend. We didn't do the tourist shopping routine.

After lunch we headed south again towards Nogales, a city on the border of Mexico. But we head east to Patagonia Lake State Park. We are stopping here in search of Black-capped Gnatcatcher and Green Kingfisher, a rare bird in Arizona. Upon arrival in the park we run into one of  Arizona's summer monsoons. 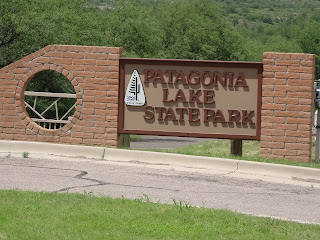 We decided to call off the hunt because of the lightning and drove further east to the Paton's house.
The Paton's first began inviting birders into their backyard shortly after moving to Patagonia in 1973. They eventually put up a canopy and set out benches, bird books, and a chalkboard for people to record their sightings. The Patons had a special vision for supporting their backyard birds with an array of feeding stations and supporting the wider birding community by sharing the riches of their own yard. This place is famous for the rare birds that have shown up in their yard. It is the most reliable spot to find Violet-crowned Hummingbird in all of the state. 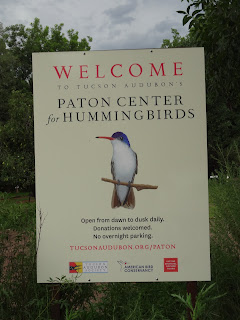 Besides hummingbirds, we were also able to enjoy Gambel's Quail, White-winged and Inca Doves, Gila Woodpecker and Rufous-crowned Sparrow.


Although we did see Violet-crowned Hummingbird I was not able to get a good photo so I borrow some free stock photos of them from the internet. 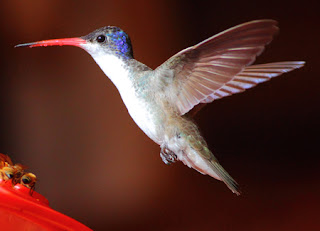 It was now around five o'clock so we started the long drive back to Madera Canyon where we would spend the night. We booked a room at the Kubo Lodge which always reminds us of a hobbit house.

When we checked in we were told to take the hummingbird feeder in at night because the bats will drink all the liquid during the night. We did that but I had to watch the bats for about 15 minutes or so before stealing their food. At dusk we went down to the Santa Rita lodge and watched the Mexican Jays and more hummers. When it was dark enough we walked across the street to a telephone pole in hopes of seeing the Elf Owl come out of its hole for the evening hunt. But we had no luck with that. The owner of the lodge said that they already fledged their young so they probably abandoned the hole for this year.
We met some new friends from VA, Ana and Jeff. They were going to attend the Tucson Birding Festival for the weekend. We exchanged cell numbers and updated each other on our bird sightings for the next 5 days.
Anyway we got another nice sunset and went back to the cabin to dream about tomorrow's birding adventures. 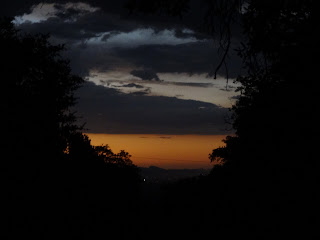