A Northern Arizona triple play
by Carl Perretta
On January 29 I took an overnight trip to an area just south of Page, AZ - the site of the Glen Canyon dam and Lake Powell. On a steep slope at a roadside pull-off there were a flock of Rosy-Finches which had been coming in regularly for about a month and a half. The great majority - about 50-60 - were Black Rosy-Finches, and in the flock were usually one or two Gray-crowned Rosy Finches. I hoped to see the birds, which were about 275 miles north of my base in Scottsdale. I had tried to get them a few weeks earlier in a one-day back and forth run, but had not been successful. In fact, I had to cut my trip off early because it started snowing rather hard. This time, I traveled north with plans to stay the night in Page. This would give me a brief window to see the finches on the way up, and as much time as I needed the next day to get two lifers.
I arrived at the site with not much daylight left on Monday, so I was going to have to get lucky on Tuesday. After checking into my hotel and having a dreadful take-out Chinese dinner (see my review at: http://tinyurl.com/y4gysh7o), I turned in for the night to get an early start the next morning.
I was up before dawn, had the hotel breakfast, and drove to the site, where the sun was just getting up. It was about 7:15. I threw out some seed I had brought with me to entice the birds back to their regular spot, and sat in my car to wait. At around 9 o’clock, I saw a circling flock of small birds which did not come in, but moved off. I was sure they were the finches. I got out of the car to wait for their return, and a man came by, stopped, and strew sunflower seed near the top of the ridge, where observation would be very easy. The gentleman was a wealth of information. He told me exactly where to sit and wait, and felt confident I’d be successful. He then left for work in Page. Sure enough, at about 9:15, a flock circled and finally lit near the top of the ridge, close to where I was standing. My first priority was to pick out a Gray-crowned, in case the birds flew off. 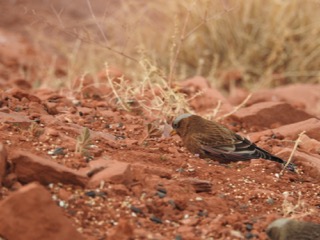 Gray-crowned Rosy-Finch
Most observers said the birds might stay for 20 minutes or 20 seconds before flying off. The chap who had stopped to put out the seed said they seemed to be on about a 40 minute cycle of landing, flying away, and landing again. 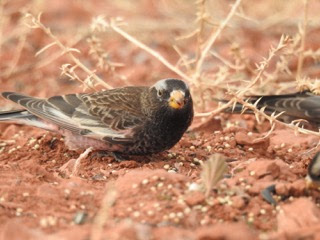 Black Rosy-Finch
After being satisfied that I had seen a Gray-crowned among the much more numerous Blacks, I approached a bit and took up my camera. These birds could not be described as shy. As I wrote in a AZNMBIRDS post, at times I thought my shoe would appear in some of the pictures I was taking! I reeled off a series of shots, and after about 12 or 13 minutes, they flew off.
Satisfied that I had gotten good looks, I decided to head off for Navajo Bridge - a span over the Colorado at a place called Marble Gorge. It is a spot near the Vermillion Cliffs, one of the release sites for the reintroduction of the California Condor. My earlier visitor was an experienced birder in the area, and he told my to try standing on the old bridge and observing the underside of the new bridge, where a family of condors sometimes roosted. I had the great luck of being there on an overcast day, when there was essentially no thermal activity and the birds would probably be earthbound. When I arrived, fortune again smiled upon me, as the old bridge was where a wildlife biologist from the Peregrine Fund was observing two roosting birds perched on the girders of the new bridge, within easy telescope and photo range. This young woman knew the pedigree of each individual, and informed me that No. 54 (a wing-tagged adult) and a juvenile with him (as yet still untagged) were parent and child. Furthermore, the youngster had been hatched and raised naturally in the wild, and was thus a countable bird by ABA guidelines, unlike the parent who had received human rearing! I had seen condors some years ago at Big Sur in California, but all were tagged birds who had been raised with human intervention. It was truly a satisfying three-lifer day. 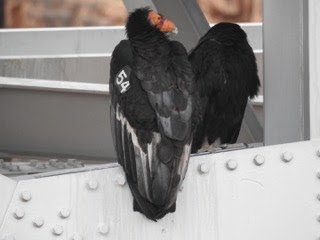 Parent Condor (No. 54) and still untagged chick
Posted by Al Guarente at 6:17 PM