I always enjoyed the Cape May Lewes Ferry field trip with BCDC. It is one of my all time favorite field trips. So this past Saturday eleven intripid club members and guests came out to enjoy a beautiful day at sea. The weather was absolutely perfect with clear skies and small swells. Unfortunately, for our first time ever, the ferry left about an hour later than scheduled due to mechanical issues.

Once we were able to leave the dock we quickly noted that we were heading right into a head wind so the viewing was a little shaky as it was difficult to hold the binoculars study. After a few minutes we started viewing Northern Gannets and had four species of gulls were following the ferry. Great Black-backed, Herring, Ring-billed and some Laughing Gulls still hanging around. On the return trip we added Lesser Black-backed Gull. 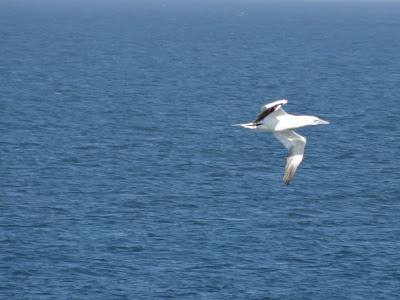 Although I was expecting to see a lot of loons we only ended up spotting five Common Loons and zero Red-throated Loons. We usually saw thirty or so in past years.

About halfway across the bay we started finding scoters. We had Black and Surf Scoters but never came across any White-winged Scoters which is the rarest of the three.

After we arrived in Lewes and started our return trip we were able to spot about 30 Sanderlings along the shoreline and when we approached the jetties Kristi was able to find us a few Ruddy Turnstones. Now with a tail wind it was a lot easier viewing and the waves had calmed as the temperatures increased.

We were keeping an eye out on the bow for anything that would fly in front of us but the action was slowing down as the day got warmer. At this point I went to the stern hoping to find a Kittiwake in the wake of the ferry. When I looked at the gulls tailing the ship I noticed that three Jaegers were attacking a Great Black-backed Gull trying to make the gull drop it's meal.

I then called John Zygmunt on the phone and told him to bring the gang to the stern. We were all able to see the Jaegers but they were quite distant. Later as we re-entered Jersey waters a Parasitic Jaeger flew right across the bow of the ship. This was definitely the highlight of the trip for me and the first time that we have recorded this species on this field trip.

It was a good trip and everyone enjoyed themselves and I know lots of folks were able to chalk up some life birds. Hopefully we can do this again next year.