It was New Year's Day when I found my first White-winged Crossbills on the Haverford College campus.   A flock of about 20 birds landed briefly in a Norway Spruce and then in a group of hemlocks by the North Dorms.   They stayed only a minute or two before flying off into Montgomery County.   I have been looking for more ever since.

On January 29, late in the afternoon, I finally found three birds in the pinetum.  They gave fleeting looks, but I was encouraged, especially when others found more on subsequent days.  Saturday morning, February 2, I set out with camera in hand in the hopes of securing a few photographs.  As usual, I started at the pond where I was happy to see two pairs of Hooded Mergansers.  As I was walking along the meadow's edge, I noted a large form in the tall Tulip Trees in the center of the lawn.  A quick look through binoculars showed that it was not the Red-tailed Hawk I was expecting, but a Bald Eagle instead.  The photo below is zoomed and cropped from quite a distance, but it is clear that the eagle was watching me!  No wonder all the geese were in the pond and not foraging on the grass. 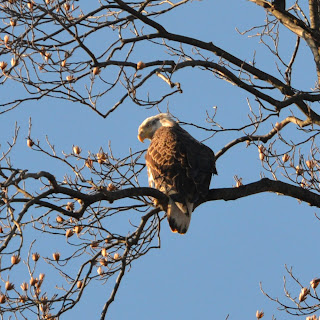 The eagle apparently did not appreciate even my wide approach as I walked around to try to get a better view.  It promptly took to the wing, but at least I was prepared with the camera. 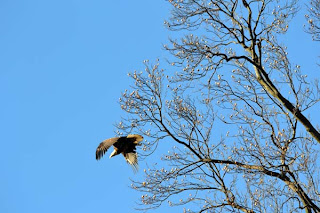 Here is a closeup from the same photo.  Today's digital cameras are truly amazing.   All I did was point and shoot.  Notice that the bird has some dark edges on its tail, but still counts as a fourth year bird. 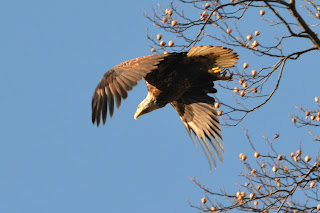 Even though I did not find any crossbills in the pinetum, the eagle made Saturday morning a success.

Saturday afternoon, sans camera, I tried again.  Of course, this time seven White-winged Crossbills put in a brief appearance.  They seem to prefer the spruces that are just below the tennis courts. They also always fly in from over the track, and fly back out in that direction.  They have been seen in the hemlocks behind Drinker (the dorm next to the track).  I reasoned that they might also forage in the row of spruce trees along the brick walk next to the art building.  These trees are evident from the South Lot; however, so far I have not found them there.

This morning, Sunday, I set out again, without the camera.  It was overcast with a few flurries gently floating down in the breeze.  The pinetum was quiet.  No American Goldfinches or Red-breasted Nuthatches.   No Northern Flicker or Brown Creeper.  Not even any House Finches.   I encountered Tom who had come in search of crossbills.   I explained that they preferred the spruces behind the tennis courts, but that they also had been seen in the Japanese Cedars (tour stop #3 between the redwoods and the sequoias) and the hemlocks behind Drinker.   My plan was to sit on the bench and wait for them to arrive.  From the bench the cedars are directly in front of you, the spruces are easily visible to the right and turning around allows a binocular view for scanning the hemlocks.  I was not disappointed.   About 9:15 AM, I first caught sight of a single bird flying into the spruce trees behind the courts and then four birds flew from there into the cedars in front of me.   I moved quickly across the field.   A Yellow-bellied Sapsucker was calling.

It is amazing how a pink bird can be hard to find in a green tree, but the cedars are thick and provide good cover.   Two male and two female White-winged Crossbills had settled in to feed.   After a quick call to Win (who had missed the birds the previous day), I called Karl to see if he might come with the camera.   No need!  As we were talking, the birds flew off, across the track, past the hemlocks behind Drinker, and then seemingly veered a bit to the right.   I joked that they were headed for my house and suggested to Karl that he go out to look for them.  In truth, I thought they had flown toward the row of conifers along the wide brick walk, so that is where I went next.  No birds there.  I walked home.

As I approached my house, there was Karl standing in the front yard, camera in hand and a smile on his face.  He actually had gone out to get a photo of a young Red-tail that was harassing the birds on our patio.   While standing in the yard, he heard the crossbills come in and land in the hemlock across the street.   He had photos to prove it.

Well, the photos are not so good because the lighting was poor and the birds were at the top of the tree . . . but, here are a male and a female White-winged Crossbill. 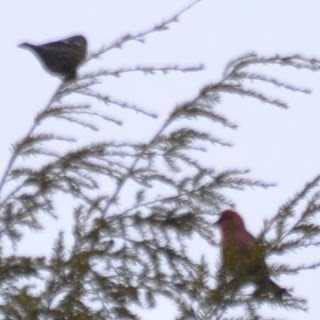 And here is a male teed up on the top of the Norway Spruce.  The males seem to like this vantage. 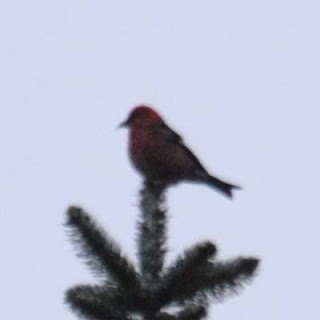 Of course, the young Red-tail had spooked them just before I made it home.  They had flown across our yard, across the creek and into Ardmore.  The good news is that they, or similar groups, clearly make the rounds regularly.   Later in the morning, both Win and Chris were able to watch them feed in the cedars in the pinetum.

So, come to campus, have a seat on the bench in the pinetum, below the baseball field and wait for the White-winged Crossbills to appear.   If you're lucky, you might even get more than a brief look. . . and perhaps you'll get a good photo too!