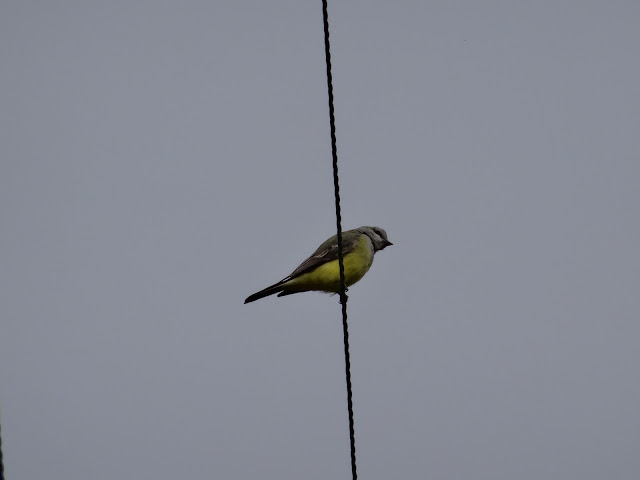 I had to make a trip to Bucks County to drop Sharon off at a friends house and afterwards I had about 3 hours to spare. So I made the drive up to Palmerton near Beltsville State Park in Carbon Co not far off of the PA Turnpike to find the Western Kingbird hanging around the area. I tracked down the location with my trusty Tom Tom GPS and arrived at the intersection of Hemlock St and Dairy Rd and pulled off to the side of the road. I immediately surveyed all the wires in scanning distance but nothing looked like a kingbird.
So I examined the fields and found several Savannah, Song and Field Sparrows and a few Juncos. American Crow was the most numerous bird in the area but there were also quite a few Eastern Bluebirds. Checking the wires again added a bunch of Starlings and Mourning Doves.
Inspecting the area once more I spotted a Northern Harrier canvasing the field. Black-capped Chickadees approached from behind me as did a Red-bellied Woodpecker. Scanning the wires again I suddenly found the Western Kingbird almost directly overhead on the wires closest to my position. How he stealthily veiled his approach flight to the wire, I don't know, but I was glad to see this visitor for the western states. His appearance was quite flashy with his bright yellow breast, belly and undertail coverts and grayish throat. The white outer tail feathers were barely noticeably in the photos but they were present.
So after a twenty minute wait I was rewarded with a great bird for Pennsylvania. I headed to Beltzville State Park afterwards and added a few Carbon Co birds and then headed back to meet up with Sharon. So it was worth the trip and it was a nice day to be out.
Posted by Al Guarente at 1:38 PM