Checking out my notes from last January 2015 I discovered quite a number of 80 degree days.  Not the same situation this year:  low 70’s at best with most days in the 60’s plus lots of rain and a number of serious storms with tornado activity.  In the last two weeks there were at least two tornadoes touching down fairly close to our condo but no direct hits.  In fact one night Susan and I slept through a cell phone tornado alert and only the next day discovered many folks in our community spent part of the night huddled in their closets as per the direction of the National Weather Service.  Luckily we dodged a bullet!  Still the weather failed to stop us in our jobs as real life beach combers and naturalists.
Generally the day would start slowly with breakfast and the crossword puzzle (unfortunately I just read that working on these puzzles does not prevent senility). After packing our lunches and loading up the car we were usually off to some beach for exploration. One benefit of all the storm activity is the profuse animal and plant deposits left behind on the beaches. On a visit to South Beach on Marco Island we found thousands of Florida Fighting Conchs almost all of them still alive washed up on the beaches and jetties. 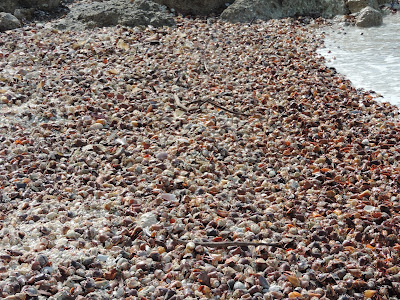 Like a flashback from a year earlier we discovered the same large numbers of Black Skimmers and Royal Terns along with small numbers of Sandwich and Forster’s Terns in the same area of beach.
New this year was a very tame Brown Pelican and an Osprey devouring a striped bass only a few feet from us passer byes. 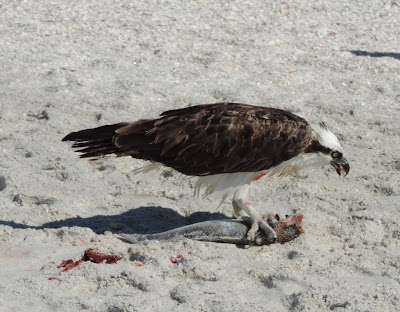 A Magnificent Frigatebird briefly soared overhead but there was no Peregrine Falcon (a usual sighting on past visits).  From here we hiked up to the more northern part of the beach, Tigertail Beach.  Here I was treated to some of the same birds that were lifers for me last year including Snowy and Wilson’s Plovers in addition to Black-bellied and Semipalmated Plovers, Dunlins, Western Sandpipers and Short-billed Dowitchers.

Another morning we visited Delnor-Wiggins Park following a different storm.  On entering the beach we discovered a large pile of Nine-armed Starfish in a spot we were clearing for our beach chairs.  Initially, I assumed some folks had collected them earlier and just left them behind rather than drag the bounty home and have it smell up their car.   As we started exploring the beach however, we discovered hundreds of the spiny-bodied creatures covering the entire beach!
We also got to witness a life and death struggle between a Sheepshead (a rather attractive bait fish) and a Brown Pelican.  Good for the Pelican but not so great for the unfortunate fish.  The bird struggled for at least 10 minutes attempting to get the fish properly positioned in his pouch to allow passage down his throat which ultimately he succeeded in accomplishing. 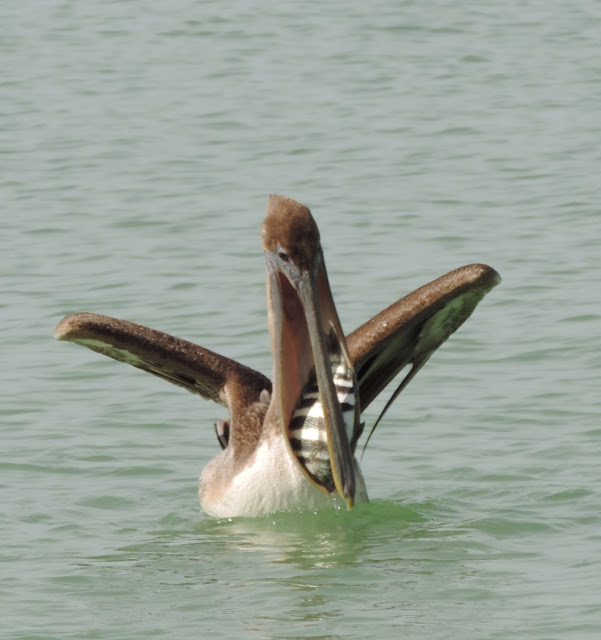 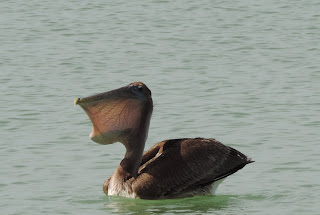 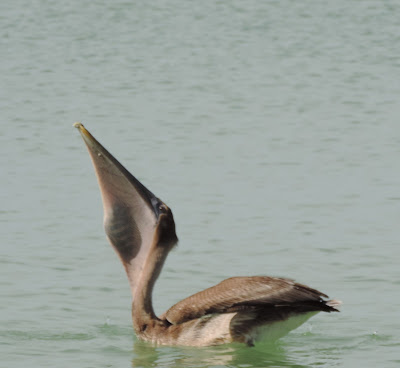 On days that were not so great for beach exploration we would trek over to one of my favorite birding hotspots:  Eagle Lakes Park.  This wonderful suburban park with its ponds, lush vegetation and great walking paths is just 15 minutes from our abode. My wife’s son gave us both Fitbits for Christmas and we try to put them to good use daily. I am not sure how the device works but it logs our steps and translates them into miles and calories burned.  Hoping to reach the hundred year milestone we are attempting to cover 4 to 5 miles per day.


I had previously reported on a retired ornithologist who frequented the park and kept tabs on the local Loggerhead Shrike population. I have not yet run into him this season but I have seen at least one Shrike with a leg band which is far short of the usual 4 or 5 birds seen in past years.
On our first visit to the park we saw a pair of Limpkins and a pair of Roseate Spoonbills.
A Caspian Tern was regularly seen fishing at the largest of the three ponds. The usual assortment of birds were present including Storks, Osprey, Coots, Common Gallinules, Red Shouldered Hawks, Peregrine Falcon, Anhingas, Double Crested Cormorants, Wilson’s  Snipe, Least and Solitary Sandpipers, Lesser Yellowlegs, Snowy, Cattle and Great  Egrets,  Tri-colored, Green,  Little Blue and Great Blue Herons, Palm and Yellow-rumped Warblers and Blue-Grey Gnatcatchers.


A surprise lifer for me was an American Flamingo at the San Carlos Preserve in Fort Meyers.  Al Guarente sent me an e-mail alerting me to this magnificent bird which Susan quickly discovered just a block off the beach. Always the entrepreneur Susan tried to recoup our gas expenses by charging the numerous passing gawkers a dollar to check out the bird through our spotting scope!
To date we sought unsuccessfully to locate two target birds:  a Western Spindalis and Spot-breasted Oriole in southeastern Florida. We made two trips to Markham Park in Sunrise without seeing either bird but did get some nice looks at a female Painted Bunting and quick looks at a flock of Monk Parakeets.
We still have time to revisit the area and hope to return.  I’m writing this during a torrential rainstorm. Hopefully it will bring in a few birds.  The adventure continues….