All of us were psyched today as it was the last day of our birding exploits. Packed into our two vans we motored our way to the Henderson Bird Viewing Area. As the third-largest body of water in Southern Nevada, the ponds prove irresistible to a wide variety of birds. Here in the middle of a desert, birds find a plentiful water source.
The Wastewater Reclamation Facility, operated to treat wastewater, uses the treated water to irrigate golf courses and highway medians. In performing this municipal service, the City of Henderson, without design or intent, created a habitat for birds. There are nine ponds available for birding, surrounded by both paved and dirt paths. The paved path is approximately 3/4 of a mile long. The dirt paths are level and allow for easy walking. When you visit, expect to do a lot of walking.
This walking proved to be difficult for John as we no sooner got started walking around the facilities when John was attacked and bitten by a red ant and had to be evacuated by golf cart back to the Visitor Center. Being such a thoughtful group, we just kept on birding.
One of the first birds found by Bob Kelly was a Least Bittern trying to hide in the cattails, but everyone knows you can't hide from Kelly's eyes.
Ruddy Ducks were numerous at many of the ponds and the males were smartly dressed in their blue bills and rusty outfits.
Walking around the ponds you could actually see the city of Las Vegas in the distance.

Birds weren't the only things flying around the ponds. I caught these two dragonflies doing their thing in mid flight. 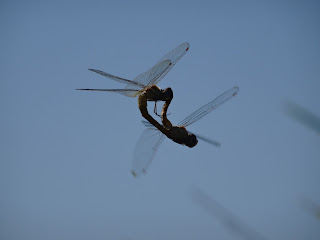 Among the various ponds we found Gadwall, Mallards, Redheads, Pintails, lots of Cinnamon and Green-winged Teal and one Lesser Scaup. We also had three species of grebes, Pied-billed, Eared and Western.
On one of the drier ponds where the water level was a little lower we finally had a few shorebirds. A Black-necked Stilt wasn't too cooperative but the American Avocets and the Wilson's Phalarope were more than happy to get their pictures taken. 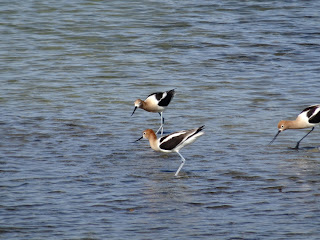 Common Gallinules provided us ample viewing opportunities as did Black-crowned Night-Herons. Roadrunners never made an appearance during the trip, which was a disappointment for John who needed it as a life bird. Two Franklin's Gull were present and a Black-tailed Gnatcatcher was seen along with Say's Phoebe, Cliff Swallows, Verdins, Crissal Thrashers and MacGilliray's Warbler.
Back at the Visitor Center I found a Palo Verde Tree which has totally green bark.
After we reclaimed John from his golf cart ambulance we headed to a small park called Clark County Wetlands Park - Duck Creek Area. Not too much here but Gary found his lifer White-faced Ibis in a small wetlands. We also got our only Clark's Grebe at this spot.
From here we drove to Red Rock Canyon at the Calico Basin Area. This was a very scenic park and the photo opps were amazing and plentiful. 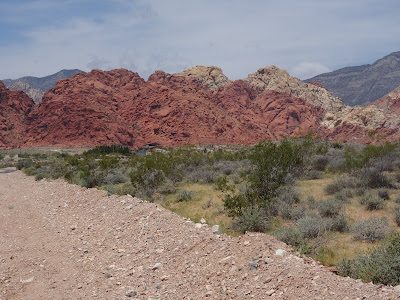 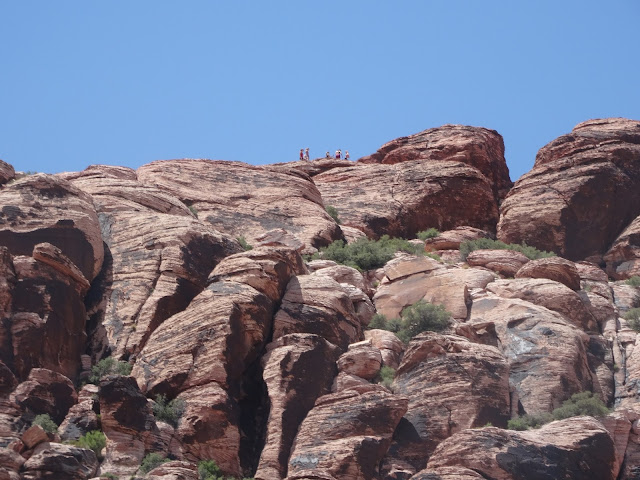 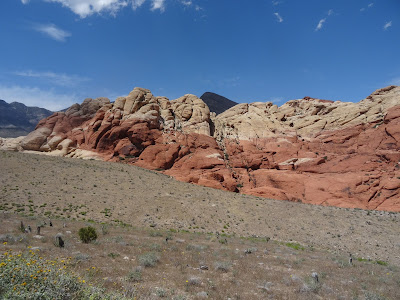 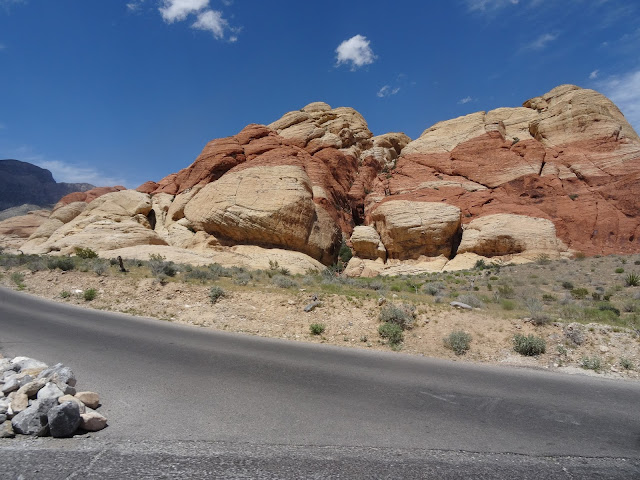 Every time we turned another corner Bruce Childs would shout out "Look at that rock formation there, they are just amazing?" He was blown away by the rock formations in the canyon. At this point we stopped for lunch at quiet pavilion then we were bombarded by a group of kids on some kind of outing. So much for a peaceful lunch. 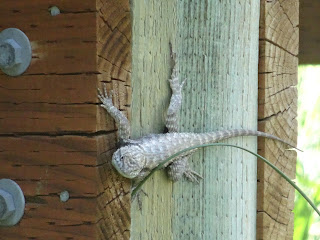 There were lots of Phainopeplas and Anna's Hummingbirds but we also found a Broad-tailed Hummingbird sitting on her nest. However, the best bird was a Pacific-sloped Flycatcher that Susan spotted and she was able to get all of us on the bird.  After studying the bird for quite sometime it finally called confirming our ID.
Farther into the canyon we stopped at Willow Springs in search of one bird, the Gray Vireo. After a stop and go hunt along the roadside we were finally able to see two Gray Vireos within 20 feet of our group, but not without some pain. While trying to get in a better viewing position Susan managed to step on a small cactus and walked away with a few needles in her foot. Even though the bird was close I couldn't get a decent photo of the pair. Also at hand was a singing Black-chinned Sparrow but no photo of him either.
Last stop of the day was Spring Mountain Ranch State Park. 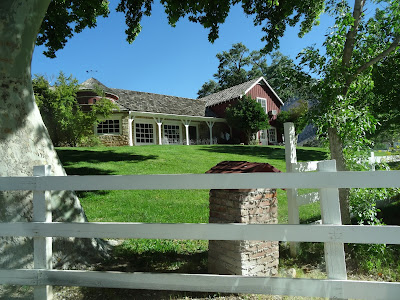 As we exited the car and started down the trail, almost immediately a Cooper's Hawk came into the trees and landed right above us. Ladder-backed Woodpeckers and Western Wood-Pewees were in the same trees and a small empid flycatcher, probably Western type, that we were not able to Id, was flying around in the low level bushes in the above photo.
As we approached the creek we found a Yellow-throated Vireo, apparently quite rare in Nevada, singing away. Down in the creek there was a Lincoln's Sparrow and a Black Phoebe. John, after finally coming out of his anaphylactic shock from the ant, was happy as a lark when he got to see his lifer Lazuli Bunting in all its breeding plumage beauty.
So after this, we called it a day and drove back to the hotel.


Carl wanted everyone to get together one last time for our farewell dinner and we toasted to a very successful trip. We came away with 136 species. I think Bob Kelly ended up with the most lifers, well over 50, so we tried to make him pay for the dinner but that was a no go. Bruce is still in awe at the mountain scenery and Nick has to go home and sort through over 2000 photos. As for John he just can't stay out of trouble even back home. When John and Susan got back home and started unpacking the car they discovered that John hadn't picked up Susan's suitcase at the airport so they had to drive back at one o'clock in the morning. Luckily the suitcase was still there. But they couldn't pick it up right away because the bomb sniffing dog was still working on checking it out.
All in all, it turned out to be a great trip and we all thank Carl for his great effort in putting the trip together. THANKS CARL!!!
Posted by Al Guarente at 11:25 AM