Today's birding escapades would see us at Desert NWR, Spring Mountain and Mt Charleston areas. We will cover a range of altitudes from 2400 ft up to 7580 ft. We are hoping for a good variety of birds today and knowing Carl he has the planning down perfectly. Also Susan and John were able to rejoin the trip today as both were feeling much better.
Our first stop was right in Las Vegas at a private home that Carl had arranged ahead of time with the owners to visit. As we drove up the owners of the house were there to meet us and they were nice enough to invite us inside to view their backyard feeding area. Our target bird was Inca Dove and when we looked outside there were at least 10 doves on the ground and feeders. This small dove has a bright flash of rusty brown in the wings when it flies and is about 2/3 the size of a Mourning Dove.
Succeeding at our first goal of the day, we drove north to the Desert National Wildlife Refuge at Corn Creek. Driving on the entrance road to the visitor's center we brake when we spot a small bird perched on top of a sagebrush. We vault from the car and set up the scopes to view a distant but decent view of a Bell's Sparrow (a recent split from Sage Sparrow). I was hoping for a Sagebrush Sparrow which would have been a life bird but no luck. Glancing around to see what else was present I spot a thrasher also perched atop a bush.  It turns out to be a LeConte's Thrasher.
At the visitor center we immediately discover a few Yellow-headed Blackbirds. It's always fun to hear this bird's raucous call and it's such a good looking bird. Also flying around was an Ash-throated Flycatcher and to our surprise we found a Brown-crested Flycatcher, a rare bird for Nevada.


Also at the visitor's center it was pointed out to us that the Common Raven on the roof could be considered a separate species in the future due to it small size. However, I haven't heard of any talk about this before so I don't know if the information is factual.

We hiked on a few trails around the refuge and found Anna's and Black-chinned Hummingbird, Western Kingbird, Lazuli Bunting, Pine Siskins (which was weird seeing them in the desert), Great-tailed Grackles, Lucy's Warbler and Bullock's Oriole.

Another bird that I thought was strange to see in the desert was a White-throated Swift, the only one we had on the trip. Usually I see them near the mountains. Western Tanagers were present in numbers and we tracked down a Blue Grosbeak and a Phainopepla near the Mulberry trees. 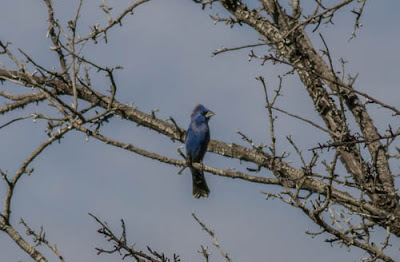 One more bird that we were able to see and photograph was an Olive-sided Flycatcher.
From here we initiated our travels to the mountains. On the way, we made a quick stop at Cold Creek Rd in search of Pinyon Jays. However, the quick trip turned out to be an hour long ride on a pothole filled dirt road and we found no Pinyon Jays, only four wheelers and dirt bikes.
Next stop was Spring Mountain National Recreation Area. At the top of the mountain we were able to hear the buzzing w
ings of the Broad-tailed Hummingbirds. At least most of us were able to hear them. I kept pointing out the buzz as the hummers whistled by but John just couldn't pick it up. It must have been the altitude that contributed to the hearing loss. Violet-green Swallows were in good numbers and a few Black-headed Grosbeaks. Nick found two Hairy Woodpeckers and we got a lesson in how the western Hairy appears different than our eastern Hairy. See photo below.
Coming off the top of the mountain we stopped at a location for Green-tailed Towhee. We got out and Carl said it should be here. He was so excited when two towhees showed themselves that he called himself "The Postman" because he delivers.

At the same spot we also found more Cassin's Finch.
At the Deer Creek Picnic Area in Spring Mt NRA we walked on the trail a little ways and found Spotted Towhees, Western Wood-Pewees, Mountain Chickadees (new for trip) and then Nick yells out Red Crossbill. Way at the top of a pine Nick found a Red Crossbill and than another flew into the tree. I always think of crossbills as winter birds but this is what they call home during breeding season in this high elevation pine forest.
Walking along the trail a little farther we hear Ruby-crowned Kinglets singing but then Nick yells again. This time he finds a gorgeous male Evening Grosbeak. Then there were three of them and they came down to the creek to bathe in the stream about 20 feet away. Awesome. This had to be the bird of the trip for some folks.
Moving on we pull over at an intersection and find a Virginia's Warbler and soaring over the mountaintop were two Golden Eagles. At Mt Charleston we reach the highest elevation of the trip.

When we arrived at the parking area near the restaurant there were cop cars everywhere. We never found out what the problem was, but we just continued birding. At this elevation we finally got one of my favorite birds, Stellar Jay. The black head and breast and the gorgeous blue body makes this such a striking bird for me. Walking around the area a little more we find lots of Yellow-rumped Warblers (Audubon's race), Wilson's Warbler and then we found a fairly cooperative Townsend's Warbler but not cooperative enough for a picture. Then five Banded-tailed Pigeons fly over our heads. We would find them a few minutes later at a feeder.

In Old Town on Mt Charleston we came across this creature. 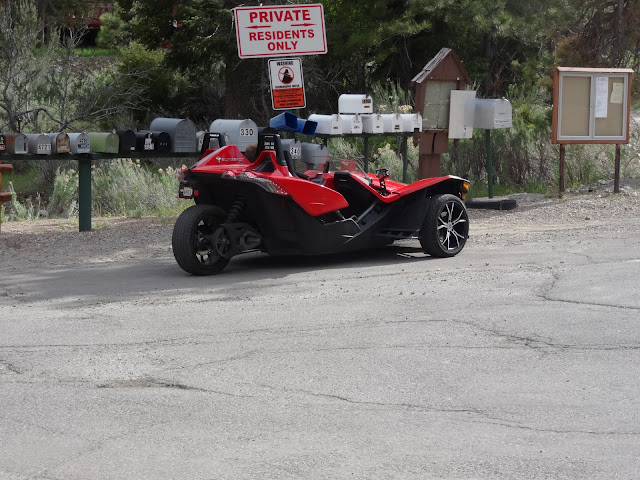 So after seeing this machine we decided to head home so that I could lose a little more money in the casino. One more day of birding tomorrow. We will visit Henderson Bird Viewing Area, Duck Creek, Calico Basin and Willow Springs in Red Rock Canyon, and finally Spring Mountain Ranch. Stay tuned.