Our third day would take this intrepid group of eccentric birders to northern Arizona. However, this morning we found out that Susan was sick all night and was not going to make the trip today. John also stayed at the hotel to watch after Susan, so there were only six club members today. Carl had made arrangements to pick up a family in Henderson that he met on a previous trip, so we would have a third car in the caravan. Carl was impressed with this young boy's birding skills years ago from an earlier trip to Vegas and wanted to have him along for the day.
After we rendezvoused with Kyle and his parents, we drove south across the Hoover Dam and Lake Mead into Arizona. I always wanted to see Hoover Dam but the new bridge they erected across the Colorado River prohibited viewing the DAM site.

Our first stop was at W Agua Fria Dr near Kingsman, AZ. It was a cursory stop but produced Eurasian Collared-Dove, Verdin, Cactus Wren, Phainopepla and our target Curve-billed Thrasher. See eBird checklist at http://ebird.org/ebird/view/checklist?subID=S29606885


Pressing onward through Kingsman we started to ascend the mountain toward Hualapui Mountain Park. On this odyssey we were impeded by the sightings of more birds. What a drag. We made a stop along DW Ranch Rd and were compensated with Gambel's Quail, Ash-throated Flycatcher, Western Kingbird, Western Scrub-Jay, Black-tailed Gnatcatcher (a lifer for many), and the magnificent looking Black-throated Sparrow.


DW Ranch Rd was a desert habitat but traveling up the mountain we came to juniper forests. We stopped again and were able to find a somewhat cooperative Juniper Titmouse.


After fighting to get the titmouse we climbed further in elevation and once again pulled off to the side of the road. We all exited the vans and found Black-headed Grosbeak, Anna's Hummingbird, Warbling Vireo, Western Scrub-Jays and looking skyward above the mountains we spotted a Zone-tailed Hawk. This was the first of three Zone-tails that we would observe today.

A surprise bird for me was a Scott's Oriole which flew in and landed on the top of a tree and allowed us to get an excellent view. 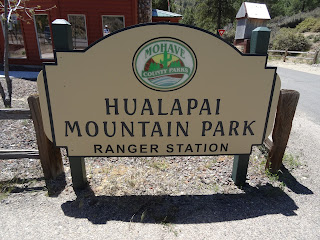 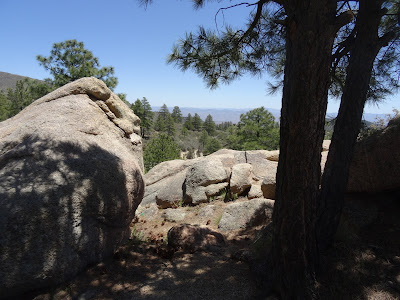 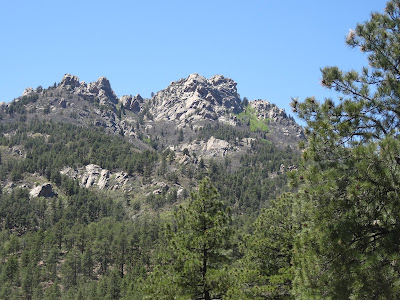 Once we entered the park we immediately lured to a large group of evergreens and were treated to four Acorn Woodpeckers hoarding their acorns in the large pines.


In the same environs we also found two Plumbeous Vireos. Positioning myself on the rock in the photo  below I could see a Western Wood-Pewee and a Black-tailed Gnatcatcher below. 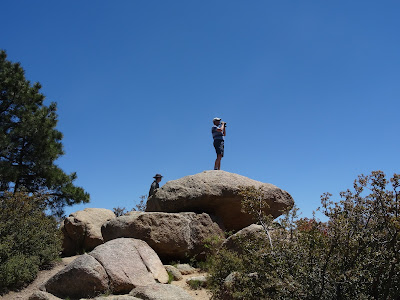 Migrating higher in elevation we saw more Juniper Titmouse, some Northern (Red-shafted) Flickers and a couple Common Ravens and the western subspecies of White-breasted Nuthatch which I believe will become a full species soon. The voice of this nuthatch sounds quite different from the eastern counterpart and the plumage is slightly different.  The western nuthatches show a much narrower black crown and much darker tertials. Unfortunately we didn't get a photo of one.
Still on the higher slopes we encountered the pine and oak forests.  We pulled into a little parking area where we thought we might enjoy lunch and I noticed a red bird fly into a tree. It started to sing and it sounded like a tanager. We were finally able to get on the bird and what we thought was going to be a Summer Tanager turned out to be a Hepatic Tanager (after reviewing Nick's Photos). Great bird and a lifer for most of the group.
We decided this spot was to hot and sunny for lunch so we proceeded to a shady area. While we were unpacking the vans I saw a little flycatcher moving around in the woods. I quickly ran after it and we were able to catch up with it. We started to play some tapes since we couldn't be sure of the ID of this little empid. We suspected it was a Hammond's and it finally answered to the tape which confirmed the ID. 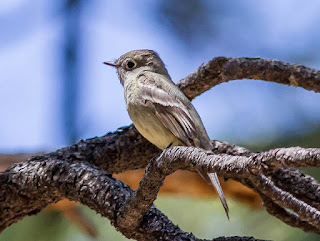 As we were eating, Kyle yelled out that there was a Grace's Warbler high in the pines. The bird eventually worked its way over to our picnic table and lingered above us for several minutes. Again, a lifer for many in the group. So we had two great birds while enjoying a nice lunch on a beautiful day in a lovely mountain setting.

After lunch we stopped at another pull off on our mountain decent. I heard a bird that sounded like a Black-throated Blue Warbler but the song was off a little. We caught up with the bird and it proved to be a Black-throated Gray Warbler.


While we were looking for the warbler, Carl was looking around back at the van and yelled out that he just had a Zone-tailed Hawk but no one else could find the bird. At this particular spot there was a report of a Painted Redstart but we had no luck finding it. So we were ready to leave the park but the third car in the caravan had trouble starting and finally caught up with us at the entrance gate. We then found out that Kyle had seen the Painted Redstart so we decided to drive back in for a second look. As we arrived, Bob Kelly looked up in the sky and yelled out that there were two Zone-tailed Hawks flying over head. So Carl was apparently correct about the hawk before. We didn't find the redstart but the two Zone-tailed Hawks sure made up for that. 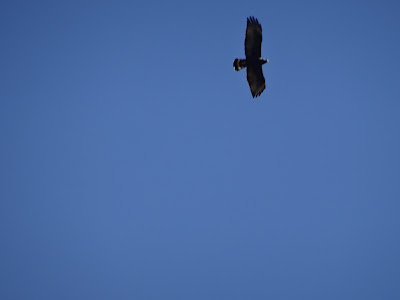 Other birds seen on the mountain were three Pygmy Nuthatches, Black-chinned Sparrow, Bullock's Orioles, Violet-green Swallows and Virginia Warbler. You can view the eBird list at  http://ebird.org/ebird/view/checklist?subID=S29625741.

Next stop was a good distance away and we were back in the desert. It was called Walking Box Ranch Rd. It was late in the day and we were getting tired but once we got out of the car we got our second wind. We were here for the Bendire's Thrasher, always a hard bird to find. We set up the scope and spotted a Loggerhead Shrike, a distant Ladder-backed Woodpecker and a Cactus Wren. Finally the Bendire's Thrasher made an appearance and performed for us by flying circles around the group and then landing on top of a Joshua Tree. Bendire's can be confused with Curve-billed Thrasher but the bill isn't as curved and the breast isn't as spotted as the Curved-billed's. See the eBird checklist at http://ebird.org/ebird/view/checklist?subID=S29625613


So after this we headed back to the hotel, had dinner and went to bed in anticipation of tomorrow's adventures.