Carl Perretta, V.P. of the Birding Club of Delaware County (BCDC), decided to run a birding blitz to Las Vegas for eight intrepid birders of the BCDC. Participants included Carl, of course, plus Gary Becker, Bruce Childs, John and Susan D’Amico, Bob Kelly, Nick Pulcinella and myself.  We all made our own flight arrangements, but Carl had made our hotel accommodations. Five of us arrived on the same plane and Carl and I rented two vans as our preferred mode of transportation.


Our home base was located at the South Point Casino on Las Vegas Blvd.
This is far from my usual two story motel that I’m used to staying at on vacations. Nick and I ended up on the 16th floor of 25 in the hotel complex. The hotel included two different bowling alleys, an equestrian center and a large gaming area including about six different restaurants. While we were staying at the hotel there was a women’s bowling tournament and a cheer leading competition on the weekend which added to the crowds.


After we checked in, we immediately headed out to a local park called Sunset Park located directly across the street from the airport. We were able to immediately pick up the western flavor of the birds to be seen in the Vegas area. We found Ross' Geese, Eared Grebes, Gambel's Quail, Anna's Hummingbird, Ladder-backed Woodpecker and some Bullock's Orioles. You can view the eBird checklist at http://ebird.org/ebird/view/checklist?subID=S29740479.
The next morning, and every morning afterward, we were eating breakfast at 5AM and on the road by 6AM. Today our northern commute took us to Pahranagat NWR. On the way to the refuge, as we were speeding down the road, we spotted a Prairie Falcon sitting on a pole allowing us to study the bird and watch the stiff wing beats as it flew around.
Carl had arranged to meet a park ranger at the refuge and he gave us a tour of the place. The first location produced a lot of waterfowl including Cinnamon Teal, multitudes of Coots, Pintail and Gadwall and a calling Sora.

We also found California Gulls, Western Grebes, Wilson's and Yellow Warbler, Western Kingbirds and Ash-throated Flycatcher. But the bird that caught everyone's attention was when Nick yelled out MacGilliray's Warbler. Although difficult to see we all managed to get a look at the warbler.

The next stop was to find the western subspecies of the Willow Flycatcher which we were able to see but since it didn't call the subspecies ID was undetermined. We were also excited to find an Orange-crowned Warbler, Western Tanager, Black Phoebe, Cliff Swallow, Yellow-breasted Chat, Pine Siskin, White-crowned Sparrow and Lesser Goldfinch. Moving on we stopped at the HQ and found a Blue Grosbeak and an adult Great Horned Owl and two young owls sitting in a Cottonwood tree. The final stop at a large lake wasn't helpful with waterfowl but we did add Vermilion Flycatcher and Olive-sided Flycatcher.
At this point we stopped to have lunch at the lakeside picnic table. We were able to identify the Desert Spiny Lizard and a Great Basin Whiptail.
After a delicious lunch of Peanut Butter and Jelly sandwichs we moved on to Moapa NWR. This refuge was established in 1979 to protect the population of Dace, a small fish living in muddy creeks. Dace populations were in decline due to habitat destruction and modification. Competition with introduced species such as mosquitofish and shortfin molly, as well as the appearance of non-native tilapia, contributed to the dace's decline. However, as more and more habitat is restored and non-native species are removed, the fish has begun to rebound. Recent population surveys show a healthy increase in numbers.
Our target here was Hooded Oriole. When we arrived we found that the refuge was closed for the summer. So with much determination we walked the road outside the refuge and were able to find the Hooded Oriole. As an added bonus we also picked up Lucy's Warbler and a dark morph Red-tailed Hawk. Check out our eBird list at http://ebird.org/ebird/view/checklist?subID=S29600735 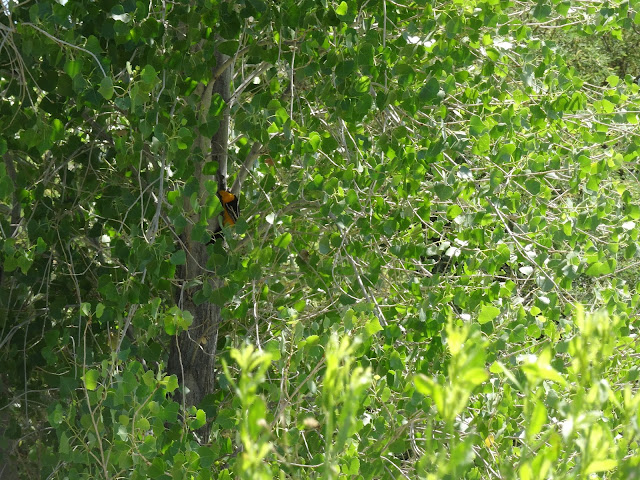 Continuing on, we headed back toward Las Vegas and stopped at the Floyd Lamb Urban Park. As soon as we got out of the car we were treated to the booming call of several Peacocks.
As we ventured around the park we added Eurasian Collared-Dove, Black and Say's Phoebe, Verdin and Wilson's Warbler. At the back end of the park we ran across a large tan rabbit which someone must have released. It was clearly a former pet. All of a sudden we were surrounded by all kinds of rabbits. Little black bunnies, a white rabbit and even a lopped eared rabbit. It felt like Alice in Wonderland.
I walked to the end of the park and saw some desert habitat I wanted to explore and was rewarded with a nice Black-chinned Hummingbird.
There were other strange activities also going on at this park. I don't know what this guy was doing.
We concluded our stay here with a decent list of birds including Pied-billed Grebe, Black-crowned Night-Heron, Common Gallinule, Osprey, Anna'a Hummingbird, Warbling Vireo and Audubon's Yellow-rumped Warbler.
The day was winding down and we were getting tired so we made one more quick stop before we headed home. We drove to a vacant lot in the middle of town and Carl had a nice surprise for us. There in the middle of the lot were a couple pair of Burrowing Owls.
Tomorrow we head for northern Arizona. Stay tuned