A Week at Hog Island 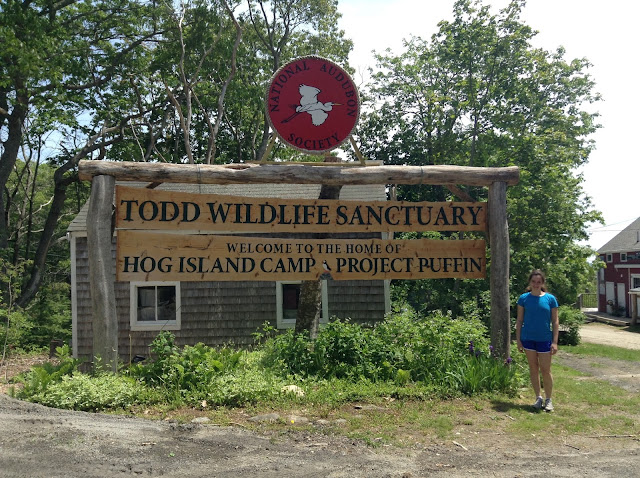 Last week (June 11-16, 2017), I was able to attend the “Coastal Maine Bird Studies for Teens” program at Hog Island.  For myself and the twenty others in the program, this was an amazing opportunity to explore the birds and different habitats of Maine.  Our teen leaders for the week were Josh Potter, Corey Husic, and Heather Richard.  Our session was also lucky to share the island with a talented group of people in the “Arts and Birding” program.

On Sunday, we all arrived in the afternoon and then had a chance to meet everyone who was going to be on the island for the week.  Everyone ate dinner together before we played games to get to know each other.  When it finally was dark, we went on an owl prowl.  We called the owls by imitating them but not by playing recordings.  The only owl we did hear was a Northern Saw-whet Owl, a lifer for many in the program.

The next day, we had an optional six o'clock bird walk; however, it was well-attended.  Then we ate breakfast before going on a "shakedown cruise" during the morning, exploring the area around Hog Island.  We returned for lunch, followed by a longer hike around all of Hog Island.  During this hike, we separated and slowly walked through the middle of the island to listen to all the sounds we heard.  After dinner, we had a presentation by Steve Kress about bringing puffins and other birds back to Eastern Egg Rock.

On Tuesday, after breakfast and another six o'clock walk, we got on the boat for the short ride across to the mainland.  Once there, we piled into the two vans to drive to different spots to bird.  Our first stop was McCurdy Pond Road.  Here, we walked about a mile down the road, listening (and looking) for warblers.  We briefly saw a Northern Waterthrush and got good looks at a male Scarlet Tanager.  Our highlight, while not either of those birds, was one briefly seen and heard: a Ruffed Grouse.  While we were looking at the Scarlet Tanager, the grouse took off from the base of a hemlock right next to the road.  We could hear its wing beats as it took off; it had been just five feet from us off the road.  Our next stop was Great Salt Bay Farm Wildlife Preserve.  Here we saw nesting Bobolinks, getting great looks and pictures. 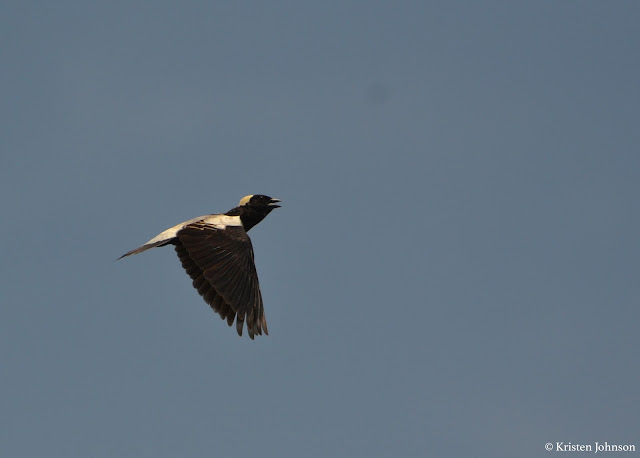 We also had a low adult Bald Eagle, also allowing for great photos.  After eating lunch, we continued on to Hidden Valley Nature Center.  While not extremely birdy, this place gave us a chance to investigate the kettle-hole bog and its plants.

We were also able to see the cool nest of an Ovenbird close to one of the trails.  We then drove back to the dock, with one stop to hear a singing Prairie Warbler.  After dinner, we had a presentation on bird song by Angelika Nelson.

Our third day was the most exciting: getting to land on Eastern Egg Rock.  Eastern Egg Rock hosts a breeding colony with Arctic, Roseate and Common Terns, Black Guillemots, and Atlantic Puffins.

After the boat ride of about an hour and climbing into the dory to land, we were dive-bombed by terns as we made our way to the lone building, called the "Hilton," on the center of Eastern Egg Rock.  Once introduced to the five interns currently on the island, we split into two groups.  My group had an opportunity to sit in blinds (more like three-foot-square boxes) while the other painted and worked on building a new, larger blind.  We sat in our blinds for about two hours.  My blind looked out at terns, mostly common with a few Arctic, some occasional guillemots and about six puffins.  The puffins would disappear into burrows and loaf on a big rock.

While the blind was not very large, the bucket with a cushion was comfortable enough, and due to the roof you were safe from the terns.  The terns did land on the roof of the blind sometimes, but they couldn't peck you.  After sitting in the blind, photographing and watching the birds, I was pecked and attacked by the terns almost immediately upon emerging.  After eating lunch together, we split back into our groups.  My group helped widen some of the trails that were growing in and then sat on the roof of the “Hilton.”  On the roof, there was one pair of terns that sat on the corner, watching you and attacking if you moved too much.


From the roof, we were able to scope nests of Common, Roseate and, although a little farther away, Arctic Terns.  Then, it was time to climb back into the dory and head back to Hog Island.  That evening, we had presentations on photography by Derrick Jackson and Drew Fulton.

Thursday morning was an early one: we started off with a sound-recording workshop at 4:15 AM.  Only about nine people managed to get up, but it was worth it.  We went in groups of three around the island, recording the different birds.  Then, being done by 6 AM, we all set off on the normal bird walk as well.  For our last full day, we headed to Burnt Island to do some banding.  With bander Anthony Hill, we set up three nets and caught one each of nine species: Swainson's Thrush, Red-breasted Nuthatch, Common Yellowthroat, White-throated Sparrow, Dark-eyed Junco, Magnolia Warbler, Yellow-rumped Warbler, Black-throated Green Warbler and Golden-crowned Kinglet.  It was great to see these birds, especially the male Black-throated Green up close; however, the real highlight of the day was 8 Sitka Spruce or Type 10 Red Crossbills.  We identified them as Type 10 based on the spectrogram of the recording someone took.  They flew over, and then perched in the tops of spruce trees for some quick photos and looks.  On the way back to Hog Island, we went by two islands with nesting Double-crested Cormorants, not very common nesters in Muscongus Bay.

Overall, this was an amazing week, complete with birds like puffins that you don't see every day.  If you would like to see more photos and hear more stories, come to my presentation to the Birding Club of Delaware County in October.  Hog Island offers programs for families, teachers, adults and teens.  I thank the National Audubon Society, for giving me an Ambassador Award, and the Valley Forge Audubon chapter for their sponsorship, both supporting my week at camp.