Sharon and I were sitting at the kitchen table on Saturday when the phone rang and it was our son Bryan who lives in Longmont, CO. He called to tell us he was available for us to come out next weekend to chase a Baird's Sparrow that was nesting in Colorado. It was around 3pm when the call came in, so I quickly got the maps out and planned a roundabout route to get there. By that evening we were packed up and ready to go the next morning. We would drive out the northern route around Chicago, up into Wisconsin and through Minnesota to the Badlands National Park in South Dakota also visiting Custer State Park and Mt Rushmore. From there down to Agate Fossil Beds National Monument in Nebraska, then to Colorado. On the way home we would travel through Kansas and Missouri back into Illinois, Indiana and Ohio and finally home. We put on 3200 miles on this route,  13 states in eleven days.
The first day's drive was a long one but we made it past Chicago. We wanted to get around the city so we wouldn't have to deal with the morning rush hour on Monday. Along the route we passed this old car and matching camper from Maryland and we kept seeing him repeatedly the next two days in Wisconsin and Minnesota. 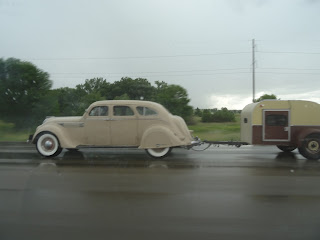 At one rest stop in Pennsylvania we came across this lady who was transporting her pony to Michigan in the back seat of her pickup truck. 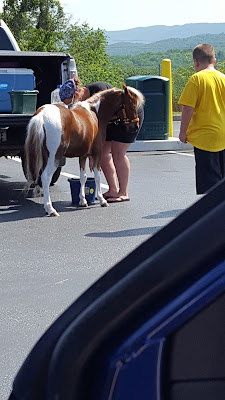 The second day we started our travels into Wisconsin and visited some small parks to look for birds. We were still getting the common eastern birds at this point but in one field Sharon found a couple of Sandhill Cranes. Good Spotting!
Driving through a local town we noticed this sign. 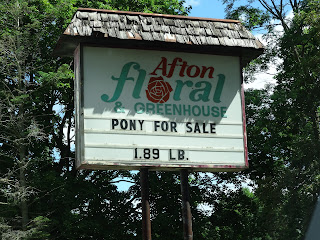 Our next stop was at Necedah NWR in west central Wisconsin. This is a very large refuge with lots of lakes and marshes. We were here in search of Whooping Cranes.
This refuge is a stronghold for the Karner Blue Butterfly. Necedah National Wildlife Refuge is home to the world’s largest population of this butterfly thanks in part due to its abundance of the wild lupine plants on which the butterfly is entirely dependent. This beautiful endangered species is only about the size of a quarter. Its pale blue markings of the male butterfly make it stand out among the purple lupine flowers that bloom in April. We couldn't find any because the Lupines were finished blooming already but here is a model of one in the visitor center.


We asked inside the center where the best spot was to view any cranes and they told us to go out back and look in the lake. Well we did that with no luck but we did find this sculpture of the whooper.
So we went back in and asked for another good area. So they told us to drive about a mile to another lake. No luck again however we did find a lot of Trumpeter Swans, some with Cygnets.
Also on the trail to the lake we found Red-headed Woodpeckers, which turned out to be quite plentiful.
A White-tailed Deer with fawn was also present. 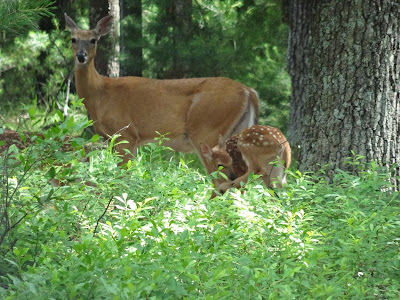 After searching for the crane in the recommended areas we went off on our own since the visitor center was now closed. We drove about 6 miles north of the usual lakes to a road called Lupine Trail. It was quite far from the other lakes so I didn't expect to see any cranes but Sharon wanted to check it out in case any Lupines were still in bloom. We were driving along the trail not seeing any Lupines so I turned to Sharon, who had been spotting some good birds on this trip so far, I said "OK little Miss Spotty, find me a Whooping Crane." So she turned around and looked backwards past some shrubs and said "How about that bird right there?" Darn if it wasn't a lone Whooping Crane.
So we ended our stay in Wisconsin on a very positive high note. Next blog will start in Minnesota.