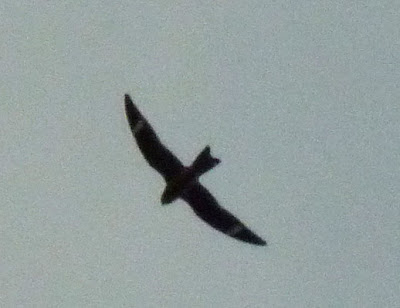 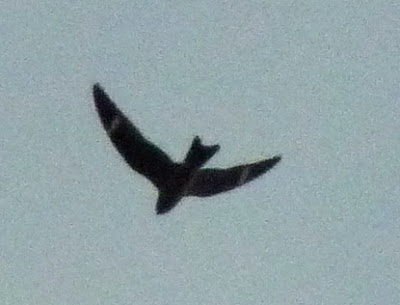 If you haven’t been out at dusk gazing at the sky, perhaps you have missed it. The good news, however, is that you’ve still got about two weeks left to catch a glimpse of Common Nighthawks during their annual migration. Where are they coming from and where are they going? I wish I knew exactly. In a general sense, they nest throughout our region and north into Canada; they winter in South America. On any given night, however, they are almost as likely to be flying north or northwest as they are to be heading south.

From my perspective, having watched them for more than a decade, it seems as if they prefer to fly into the wind or at an angle to the wind, as opposed to with the wind as migrating raptors do. My guess is that this helps insects get swept into their mouths, making for a convenient meal as they go. Their erratic feeding flight is noticeable even at long distances. 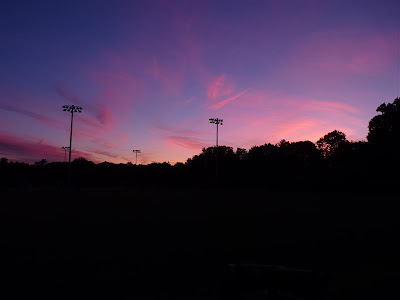 Common Nighthawks are easily recognized by their long, pointed wings with prominent white slashes near the base of the primaries. Their flight can be rapid and direct or groups of birds may circle in kettles, just as Broad-winged Hawks might do, and then head off in a “stream.” Tonight, one such stream carried more than 200 birds through my field of view in about ten minutes time!

Over the course of the past eleven years, the Nighthawk Watch from Haverford College has generally recorded 1700-3100 birds per season. This year, we appear to be on track to set a new record. Come join us at the Observatory from 6-8 PM any evening between now and September 11. Cloudy nights with little wind make for ideal viewing conditions with a glorious sunset as an added attraction.

Where else can you count 648 migrating birds in two hours as we did tonight? Total 2011 count to date: 2757 Common Nighthawks (plus 1 Osprey, 1 Kestrel and 1 Great Egret).

All photos courtesy of Andy Pesthy.

August Day of Birding in Delaware

Sunday I birded around Delaware with Chad Kauffman and Al Guarente, enjoying some of Delaware's fine late summer birding. We found 118 species on our tour that took us from Ashland Nature Center south to Cape Henlopen.  Here are the highlights:

Pre-dawn at Thousand Acre Marsh we heard a Least Bittern calling.  No rails heard, but plenty of buzzing mosquitoes. Near the Smyrna Prison on Paddock Road, Al's ears picked out a calling Grasshopper Sparrow along with singing Horned Larks. At Taylor's Gut we had a flyover Dickcissel (calling) along with a few Bobolinks. At Bombay Hook there was a nice variety of early waterfowl including Green-winged Teal, Blue-winged Teal, Northern Shoveler, and Ruddy Duck.  Northern Harrier, Northern Bobwhite, and Little Blue Heron are other notables at Bombay today.
While sitting at Port Mahon in a deluge, Al picked out a Wilson's Storm-Petrel skimming along the gray chop of the Delaware Bay. And the birds of the day must be the Upland Sandpipers that Chad spotted along Cartanza Road just before the lashing rain and lightning rolled over us.  Their beady black eyes just barely poked above the top of the furrow in the potato field. We finished the day with 21 species of shorebirds, a nice surprise given the huge shift in habitat resulting from the heavy rains of the past week.
Posted by Al Guarente at 7:49 PM No comments:

On Monday, August 22, 2011, a group of about a dozen or so eager birders set out on the Cape May Bird Observatory sponsored "Birding by Boat" cruise aboard the Osprey.  Captain Bob and naturalists David Lord and Tom Johnson take birders and others on a two hour cruise in the backbay and inland waters around Cape May.

We arrived early and were met at the dock by David, with whom we have birded on foot on several occasions.  He said, "I bet you're here to see one bird in particular!"  Now you should know my wife and I relatively new birders (just starting our second year, as a matter of fact), and had planned this excursion two weeks in advance just for the fun of it.  If we had not happened to have checked the CMBO blog the night before, we'd have had no idea what David was talking about.  But we did know:  The Brown Booby (sula leucogaster).

As we waited to set sail, other folks started to arrive -- several with very large and elaborate camera setups.  A woman who arrived not long after us told us she heard about the Brown Booby sighting and decided to drive down from New York City to see it.  Others had made similar efforts to get here just for this bird.  Their excitement was infectious, and we could hardly wait to see this rarity.

I had done a little due diligence.  The following is from a fact sheet put out by the Department of Planning and Natural Resources, Division of Fish and Wildlife, U.S. Virgin Islands (where you might expect to see a brown booby with some regularity):

"The Brown Booby is a medium-large seabird characterized by dark brown coloration except on the breast, abdomen and underwing, which are white in the adult.  Females are larger than males, but in the Virgin Islands sexes can be distinguished by bill color (pinkish-yellow in females, greenish-yellow in males)….  The genus Sula is from the Icelandic word Sulan, meaning 'an awkward fellow.'  The name 'booby' comes from the Spanish word bobo, which means 'stupid fellow' referring to the bird's lack of fear of man and clumsiness on land making them easy to catch.  Although awkward on land, their cigar-shaped bodies and narrow wings reflect a superb aerodynamic design, which is specially adapted for plunge-diving.  Their dagger-shaped bill is long and pointed with serrated edges, ideal for swift seizure and grasping of slippery fish.  The external nostrils are closed, but secondary nostrils beside the mouth are covered by moveable flaps when the bird plune-dives into the sea.  A semi-transparent third eyelid closes to protect the eyes in bad weather and underwater. The [yellow] feet are totipalmate (webbed between all four toes) to help the birds to swim well.  They have strong skulls and rib cages to withstand the pressure of diving into the water.  Air sacs under the skin also help to cushion the blow when diving for fish. […] Boobies are powerful high-speed soaring birds that can torpedo after a flying fish or fall straight down like a falcon."  I'd love to have seen that!

I have to be honest here.  Once or twice in the last year I've heard about a rare bird sighting near my home and took a shot at trying to see it.  No luck, not even once.  In fact, often on bird walks the group I'm with will be training their binoculars all in the same direction while oooing and aaahing, and I can't see a thing.  So my excitement was tempered by a generous portion of pessimism.  I expected - at best - to maybe catch a glimpse of some dark outline flying fast in the opposite direction, prepared to feel left out while the experience birders were exchanging high-fives.

But as it turns out, the brown booby is a bit of an exhibitionist, quite content to give us all long, close looks at her (it was a female we were seeing, determined in part by the pinkish bill color).  Normally, this bird is found in the islands south of Florida, but for reasons unknown this lady got herself badly lost.  If this bothered her, however, she gave no indication.  She contentedly perched on a channel marker in Jarvis Sound, occasionally taking wing to test the fishing.  (We did not get to see her feed, unfortunately).  She has been seen for a number of days now and can be seen by scope from the shore.

One birder - whose camera setup up was approximately as large as my wife's Honda Civic - said he had seen the Brown Booby before in the Dry Tortugas, but (and this is the good part) not as up-close as we were seeing her in Jarvis Sound!

If you are not doing anything more important than birding today (and what could that possibly be?), why not take a run down to Cape May? Maybe take a cruise on the Osprey.  We saw much more than our wayward Booby:  Ospreys in the dozens, American Oystercatchers, Whimbrels, Black-Bellied Plovers, Black Terns, Tricolored Herons, Yellow-Crowned Night Herons, Belted Kingfisher, and much more.  It was a great trip, and we're looking forward to the next time. Who knows what we'll see?

--Eric Weislogel
Posted by Al Guarente at 9:07 AM No comments: