On our last trip to Cozumel over 5 years ago, I experienced the worse case of seasickness ever.  We took a boat from the mainland on very choppy seas and my wife(who is a nurse and very experienced  in these things) said she had never seen anyone turn my shade of green so quickly.  Fortunately the vertigo did not kick in until the voyage was almost over so I was only dying for a short time.  On our return trip two weeks ago we flew to Cozumel directly without  the boat crossing adventure.
The island was popularized by Jacques Cousteau back in the 60’s when he discovered its great reefs and underwater wildlife.  Unlike Jacques we don’t scuba but we do enjoy snorkeling.  We were very impressed by the great reefs all along the western side of the island which faces Mexico.  Our hotel had a man made beach but the exciting feature was the gorgeous reef just 50 feet from our room. The restaurant in the hotel bordered on the ocean and large waves would crash against its clear Plexiglas  railings while we dined.  From the restaurant people threw food scraps to the fish and crabs while the tourists snorkeled amongst the throngs of excited fish.  We were treated to a wide variety of tropical fish but had additional surprises including schools of squid, spiny lobsters, sting rays, very colorful crabs and Moray eels.

One particular colorful eel was feeding around the rocks just off the restaurant.   It was a beautiful lime green color with yellow spots.  I mentioned it to one of the divers who was seated on the beach as I left the ocean.  He claimed to be a Navy diver and after listening to my description of the eel, he asserted that that was no eel but a sea snake.  Having seen several Cousteau episodes with Jacques and his divers swimming among schools of these snakes, I doubted his story since these adventures were set in the warm waters of the Pacific and Indian Oceans.  On our return to Pennsylvania I consulted our local Herpetologist Gary Stoltz who confirmed that to date there are no sea snakes in the Atlantic. Good news since they are deadly poisonous but not aggressive!
Although Cozumel is a fairly large island(29 miles long and 9 miles wide) the interior is not accessible. The AAA guide to Mexico describes it as “comprised of patches of insect ridden jungle, expanses of thorny uninviting scrub and scattered Mayan ruins none of them well preserved.  It’s a desolate landscape that makes the islands beaches all the more inviting”.  My birding was  therefore confined to the hotel and the surrounding shore areas.
The most plentiful birds were the Great-tailed Grackles, Tropical Kingbirds, Tropical Mockingbirds and Warblers.   The Tropical Kingbirds were so numerous that one mile long strip of road  had six or seven sitting on the electric lines with one bird between each set of poles.
The Tropical Mockingbirds were as ubiquitous as their northern cousins in the U.S. but the Northerns aren’t found in Cozumel.  Although not much different from the Northern, the Tropical has much more white in the tail tip and less white on the extended wings.
I did have one Golden Warbler which is Cozumel’s Yellow Warbler variant(looking just like a Yellow Warbler except for its rufous cap).
The most common warblers were the Palm, Redstart and Yellow-throated Warblers.  The Yellow-throated  were so common I frequently was able to identify their chip note.  They would hang out in the palm trees in the front of our hotel room and then land on our balcony.

On the day after our arrival we took a day trip to Ponta Sur Park.  This  wildlife preserve has a population of fresh water crocodiles so we headed for the  marshes hoping  to catch a glimpse of the furtive reptiles.  None were apparent until one of the guides gave a loud whistle and a single croc popped up about 15 feet from us off the boardwalk.  After departing the marsh we ended up at the Celaria lighthouse at the most southern tip of the island.  Here we found great fragments of both brain and branching coral much of it polished by the ocean and quite beautiful. Although not a swimming beach because of the heavy surf there were some shore birds hanging out including small numbers of Semipalmated Sandpipers, American Golden-Plovers, Ruddy Turnstones,  a Solitary Sandpiper and a Little Blue Heron.
After checking out the lighthouse we drove past several small ponds one containing a Northern Jacana and arrived at La Playa mas Hermosa(“The Most Beautiful Beach”).  Here we spent some time snorkeling and got to see more lobsters, eels,  sea urchins and many colorful fish.
We had lunch on the beach under an open pavilion.  Someone had cracked open a large coconut which attracted Great-tailed Grackles, Bananaquits, and Yellow-throated Warblers.

This day-long adventure ended when our caravan of 10 Polaris ATV’s headed back to our respective hotels.  We tourists were driving these somewhat  beaten-up vehicles several of which(including ours) had no rear or side view mirrors, head or tail lights and somewhat unpredictable functioning gas pedals.
Our tour guide merrily took us through the back streets of the main town amidst mopeds, cars, bicycles, and pedestrians in the fading light at dusk. This hair-raising venture was enough to convince me not to rent a car and instead  go it alone.  In addition our trusty Triple A guide warned “that if stopped for a serious moving violation, your vehicle may be impounded and you will be asked to accompany the police officer to the station to pay a fine.(Of course fines for minor infractions can often be settled on the spot, in cash; in Mexico a bribe is a common way of taking care of such situations).  Fortunately taxis were all over the place and people were very friendly and crime was almost nonexistent(so we were told and I believe it).  Consequently we either took a cab or walked.  The walkway into town was very pleasant and followed the ocean, so there were ample opportunities to do some birding. Along this stretch of ocean I found Magnificant Frigatebirds, Snowy and Great Egrets, Yellow-crowned Night Herons, Black-bellied and Golden Plovers, Great Blue Herons, White-crowned sparrows, and Warblers.

The warblers would hang out at some grassy areas that were being watered with “recycled water”. These watered areas although drawing in birds chased away some of the tourists as the water still smelled foul.  They would turn off the sprinklers once the tourists arrived from the boats but since I got there early in the morning I was subjected to the stench if I wanted to bird the areas.  A few days later we took a taxi to Chankanaab Lagoon Park. There was another reef here for snorkeling and a botanical garden which provided some birding opportunities. One beautiful  blackbird appeared in a bamboo forest and provided me with some good looks and some good photos.


Besides the Tropical Flycatcher, Tropical Mockingbird, Northern Jacana and Golden Warbler this was my 5th life bird for the trip: a Melodious Blackbird. There was a Tequilla distillery in the park and something attracted warblers and vireos to the trees overlooking this site. I came back to the area several times and discovered Black-throated Green and Black-throated Blue Warblers, Redstarts, Magnolia and more Yellow-throated Warblers  Red-eyed Vireos and a Gray Catbird.  There were some enclosed piers leading out from the beach for the “swim with the dolphins” concession. The dolphin handlers kept rewarding the mammals with fish which in turn brought in lots of terns, mainly Royal and a few Sandwich terns and lots of Laughing Gulls.

On the morning of our departure I was standing on our balcony watching some of the cruise ships pulling into dock when a small flock of 5 Roseate Spoonbills flew past. I wasn’t quick enough to get a picture of what could have been a neat photo-ending to our  travels. Anyway after breakfast we had a few hours before departing and so we again explored the reef off our hotel which besides the varied critters had a sunken airplane, an anchor and some canons rusting away in the waters.  We were told the plane was dropped there for some movie made years before. It was an eerie spectacle to end the week in what was a bit of a tropical paradise.
Posted by Al Guarente at 9:04 AM No comments:

This Fall Migration has produced a nice influx of Purple Finches into southeast Pennsylvania. Each week, it seems, there are more and more reports and increasing numbers.

The North American Haemorhous finches (Cassin’s, House and Purple) have distinct adult male and female plumages. This both helps and hinders us in making the proper identification. For all practical purposes, we will limit this blog to the two species that are currently being found in our region – House Finch and Purple Finch.

It seems that whenever we have an irruption of Purple Finches there seems to be confusion about how to separate the two species and a resulting increase in the number of House Finches misidentified as Purple Finches.

Let’s take a look at both species.

HOUSE FINCH – this is the common “red” finch we see in our area all year. They are easily found at backyard feeders, where they indulge on sunflower seeds. They can also be found, with some regularity, in edge habitat feeding on seed heads or berries. Adult males are bright orange-red on the forehead, throat, and breast with a brown back and wings. They have brown, vertical streaks on the flanks and belly. The rump is also orange-red. Adult females and juvenile males are a plain brown and streaked overall. The face is plain without any sharp or distinctive markings. The tail on both sexes has a shallow notch. 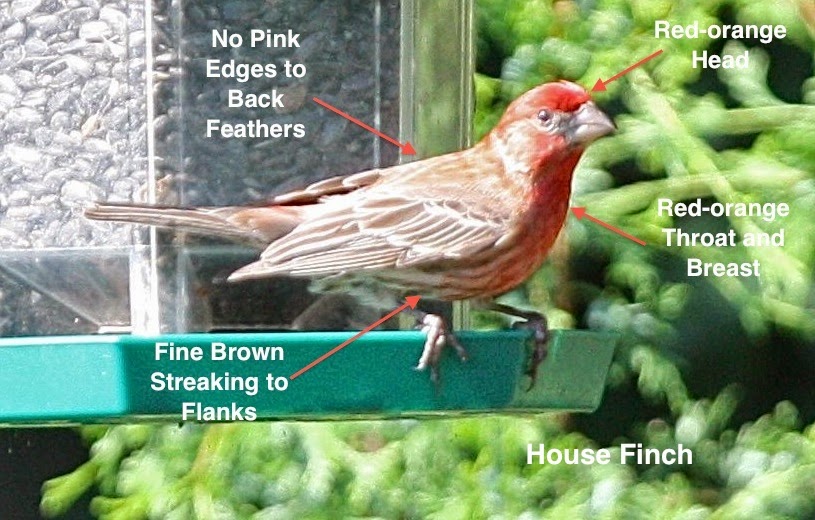 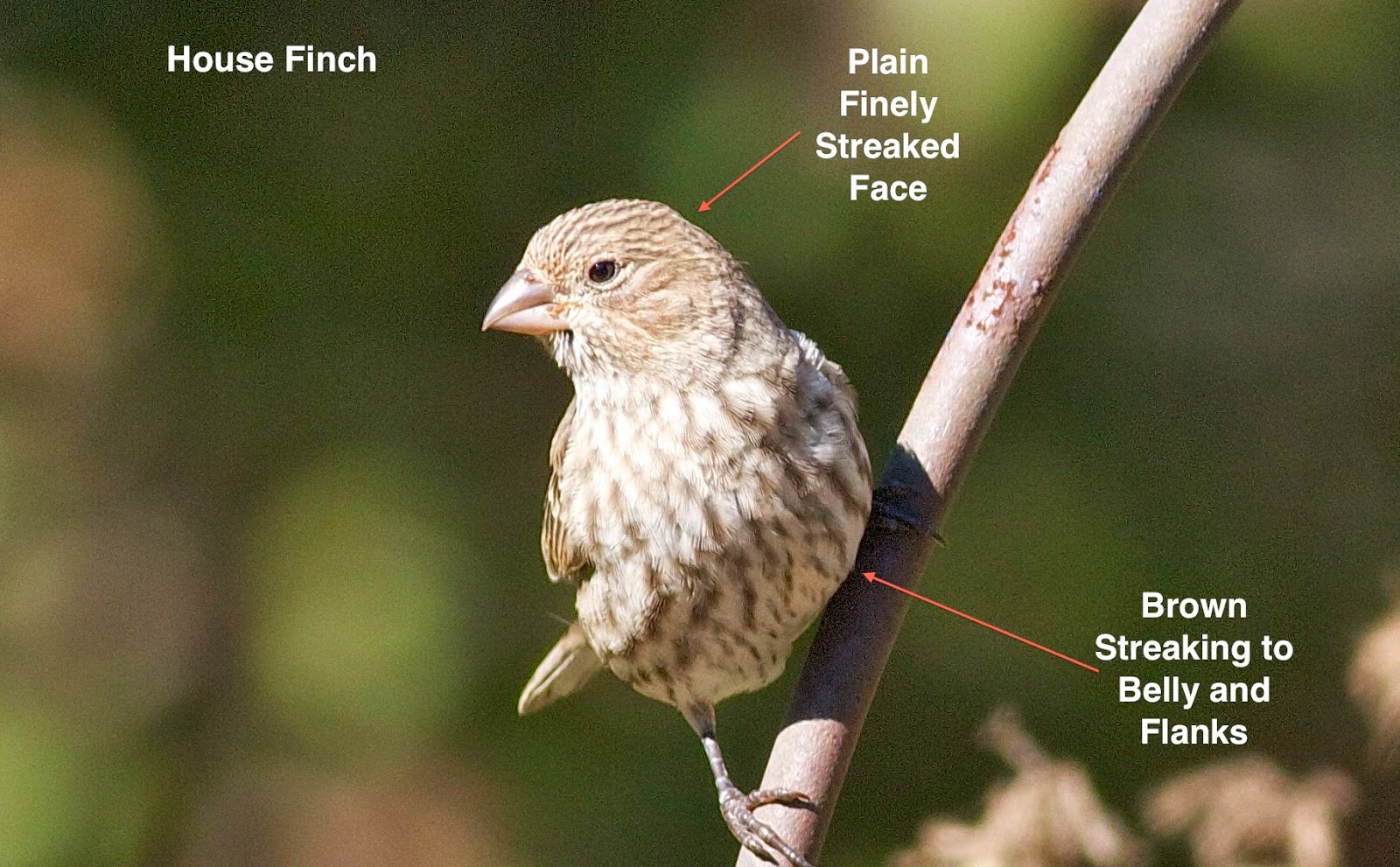 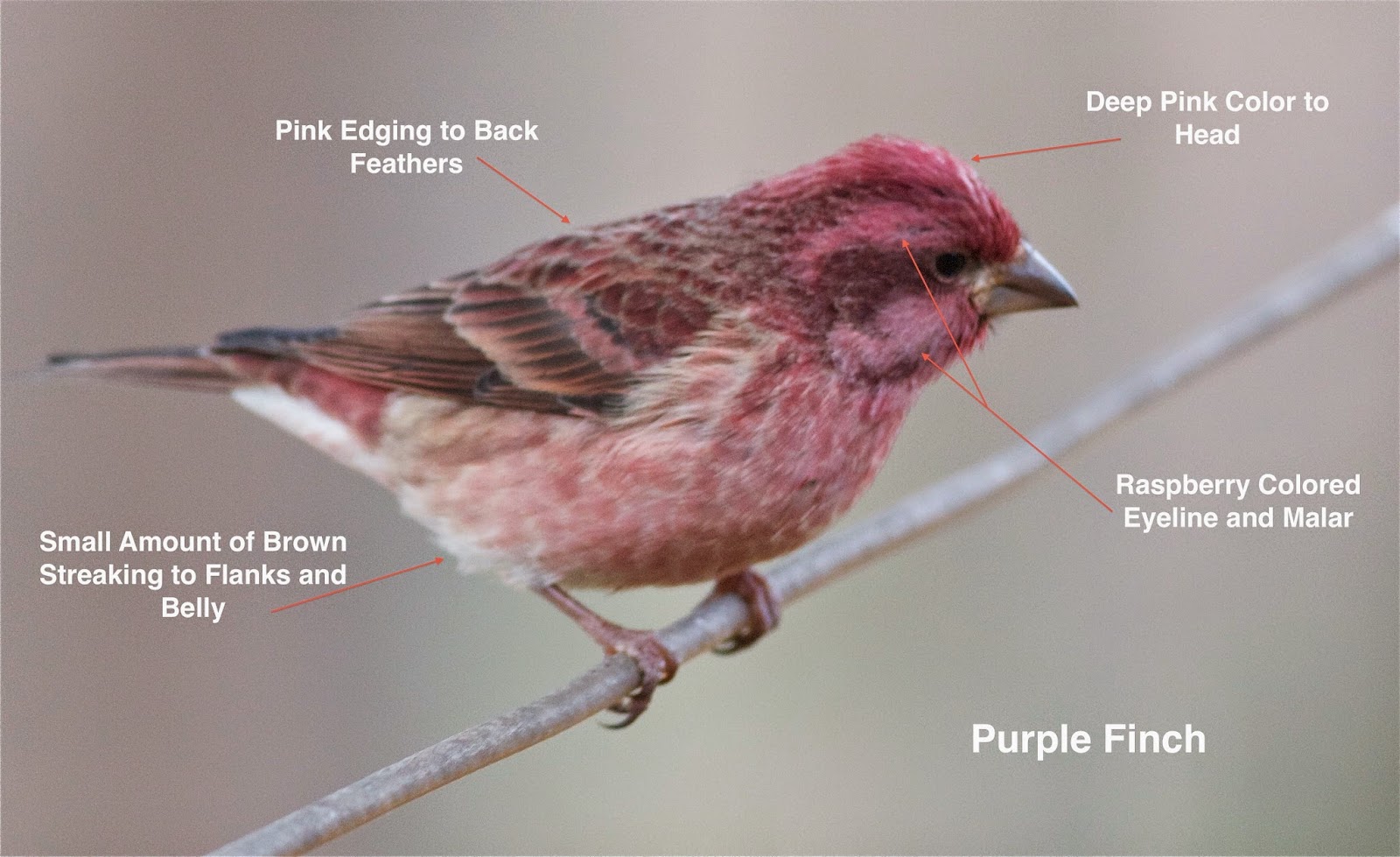 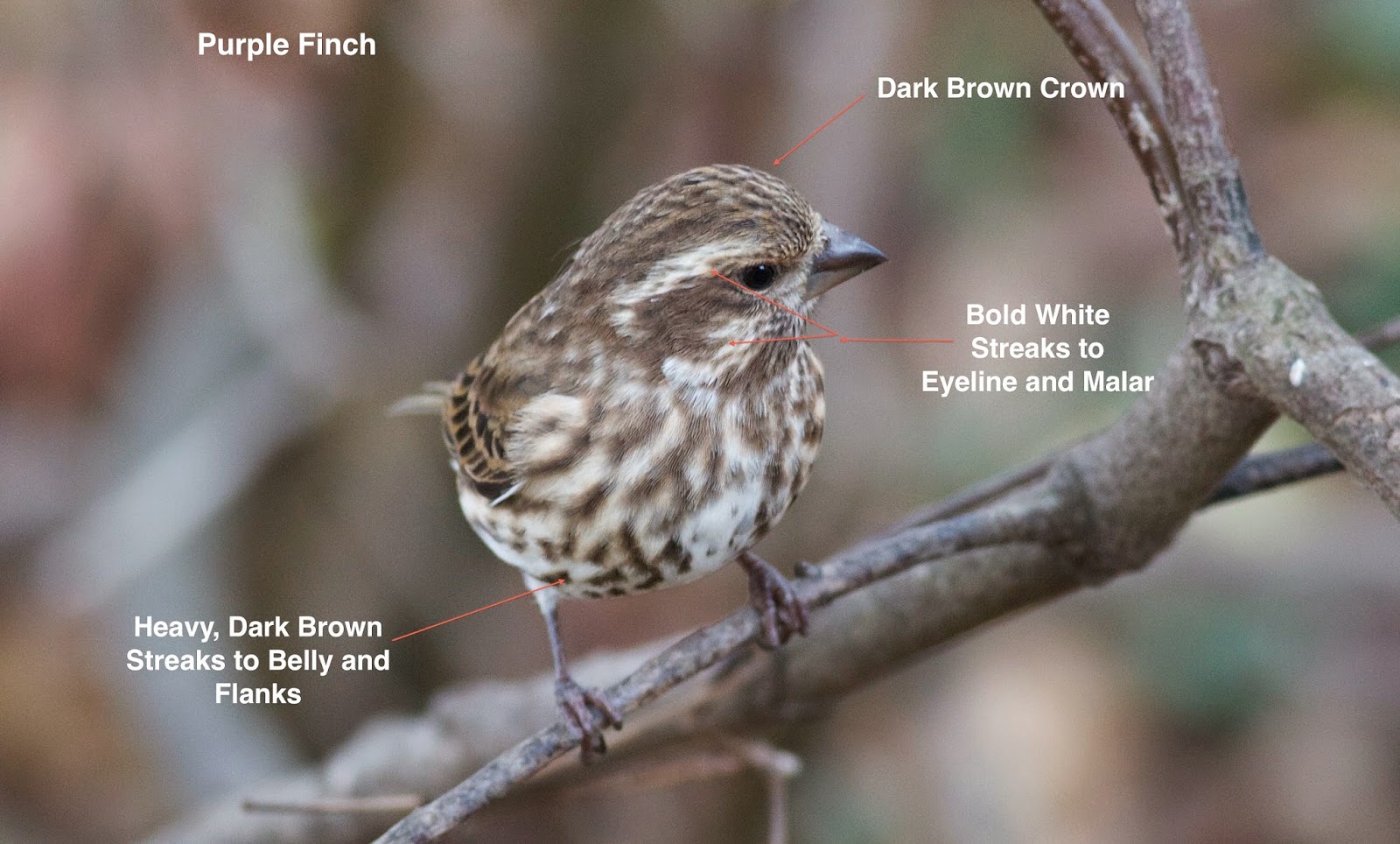 Identification Keys – what to look for. 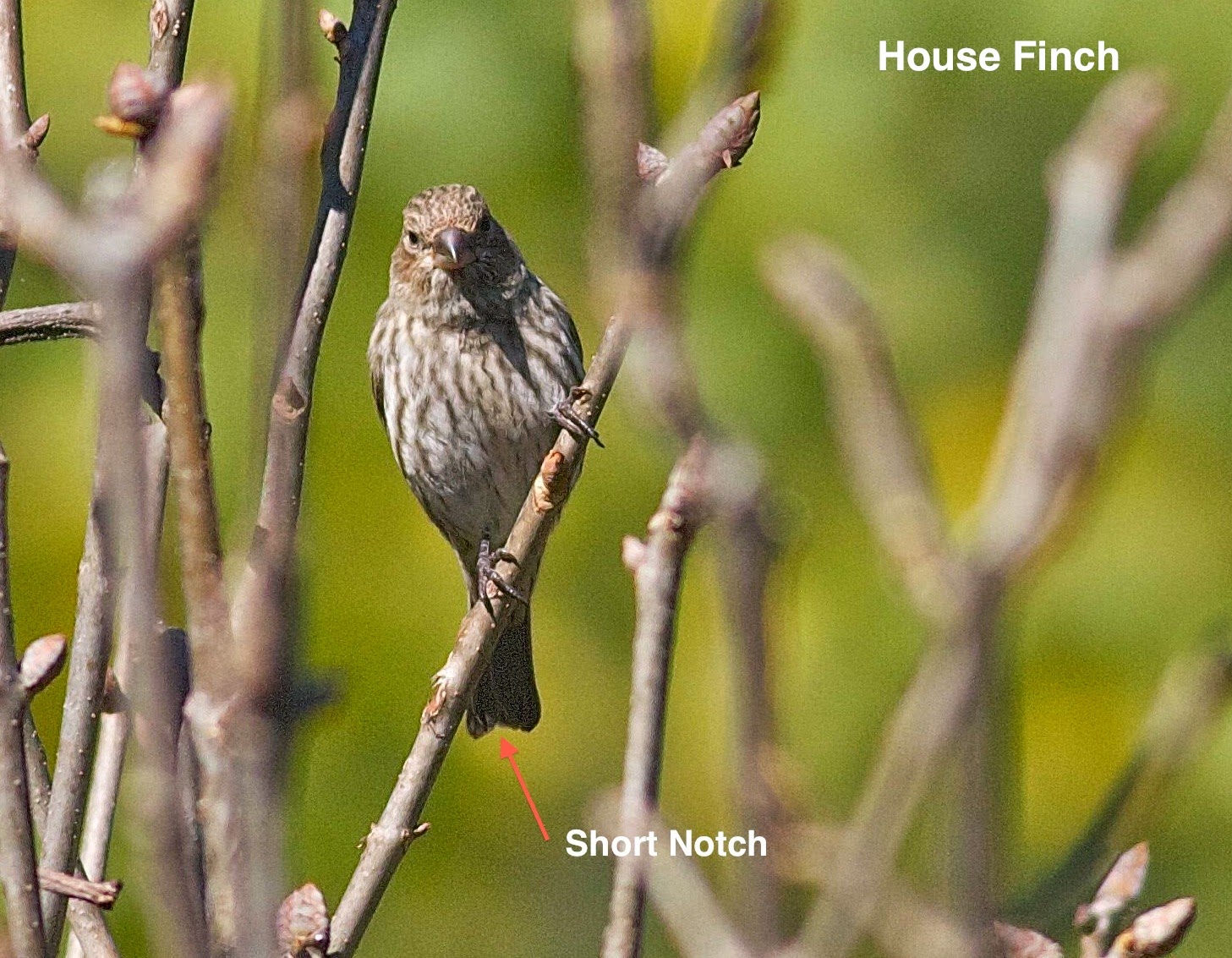 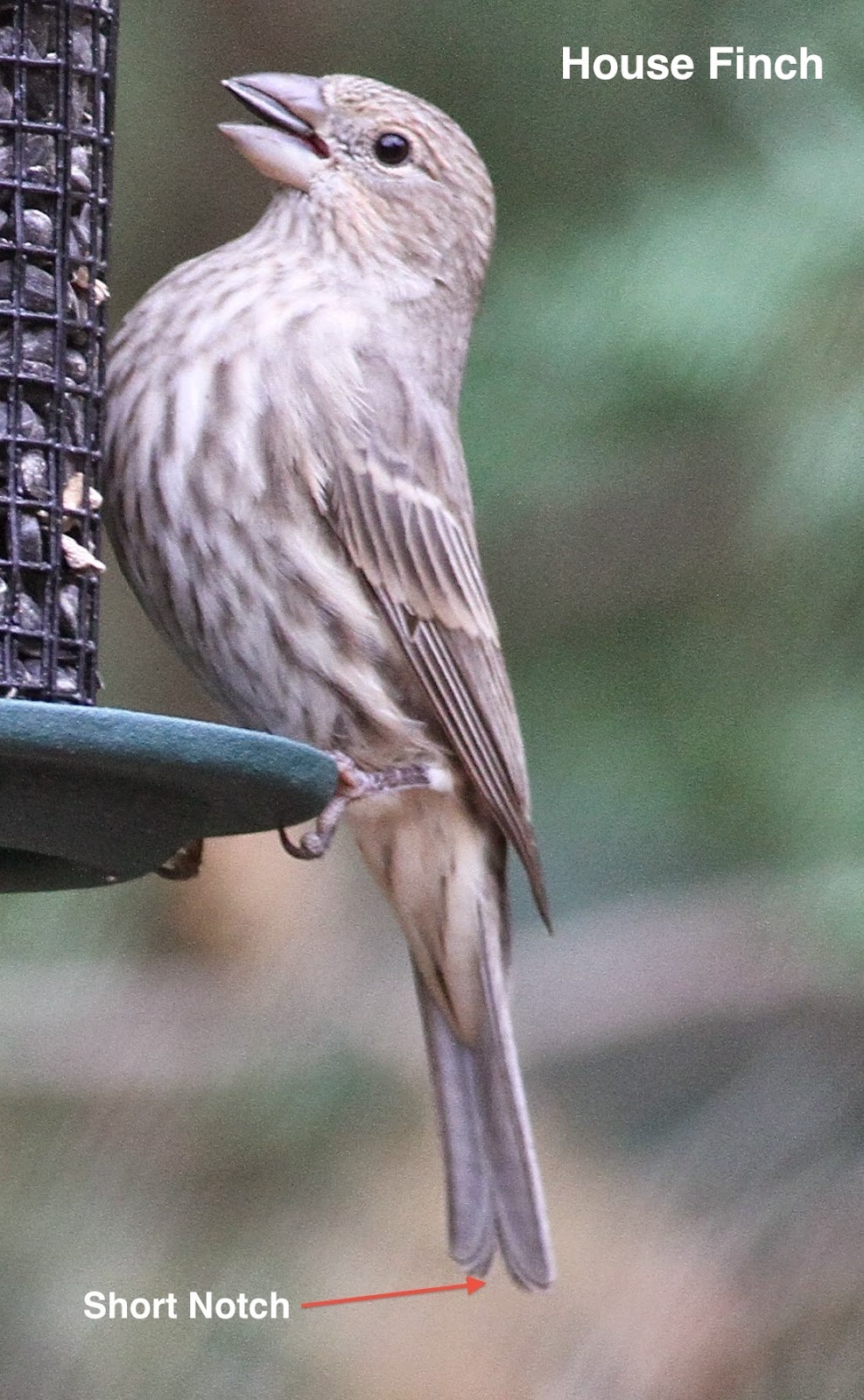 Purple Finch has a deep notch which is a very good field mark to use especially if you’re looking at a perched bird from below or a flying bird overhead. 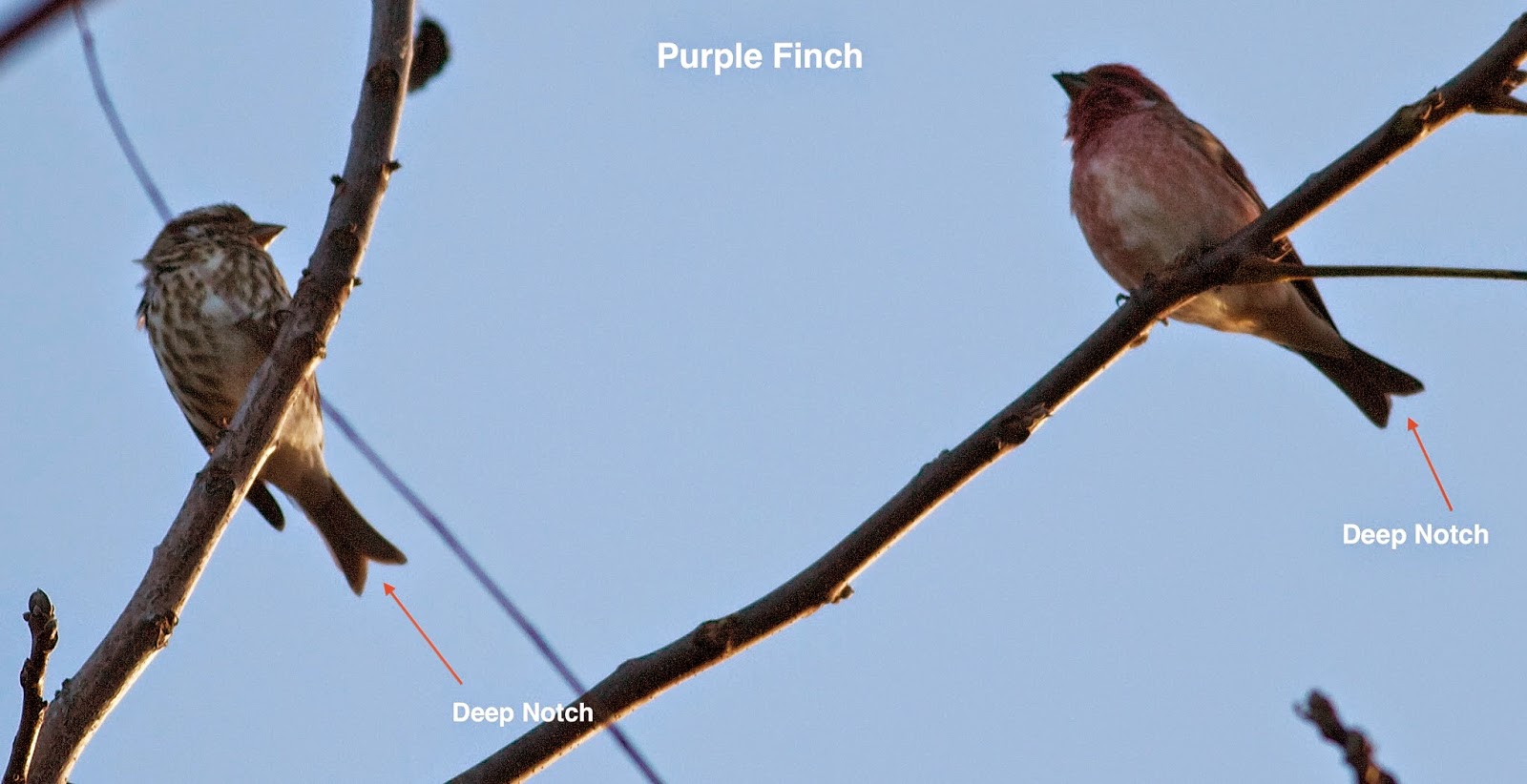 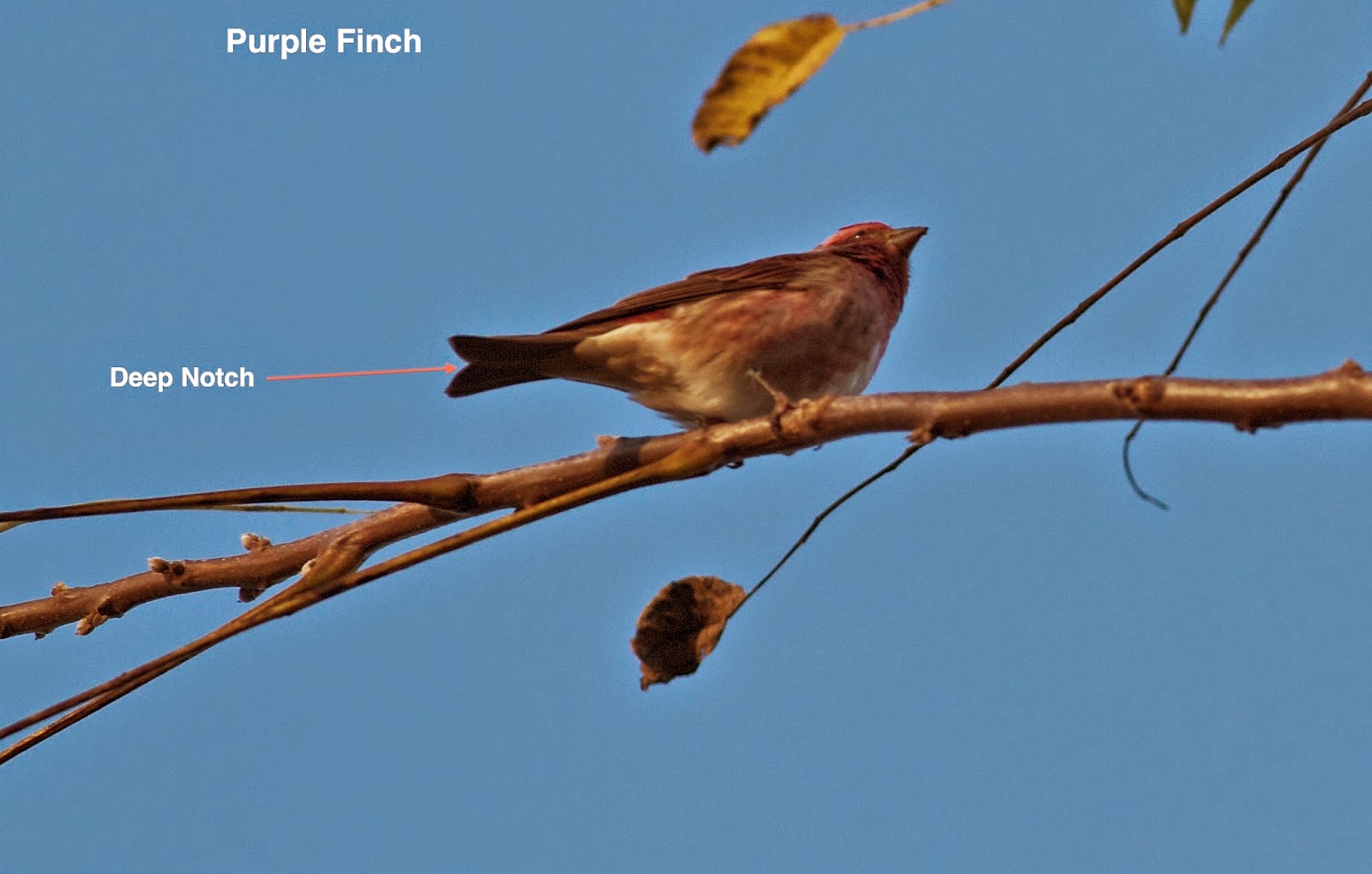 Color of adult males – House Finch shows a bright red-orange over the head, face, breast and upper belly. Purple Finch shows a soft, purplish-red or raspberry red color to head down to the belly. 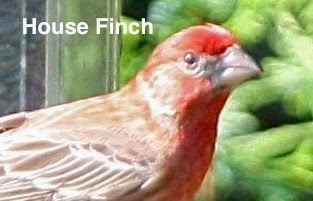 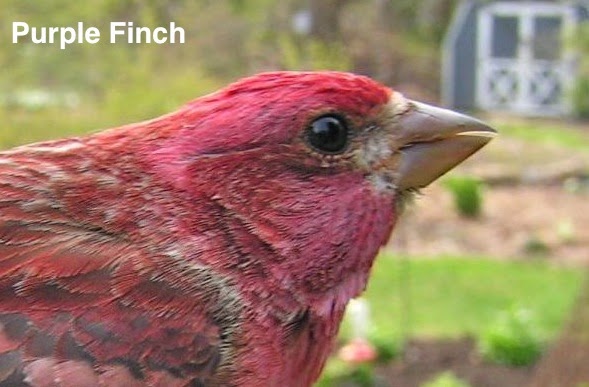 Face pattern of adult females – Female House Finch has a very plain brown face with fine brown streaking throughout. Female Purple Finch has a nice dark brown head and a face that has a bold white eyeline and malar stripe. Both of these white streaks are hard to miss. If these are not present, you probably are looking at a female House Finch. 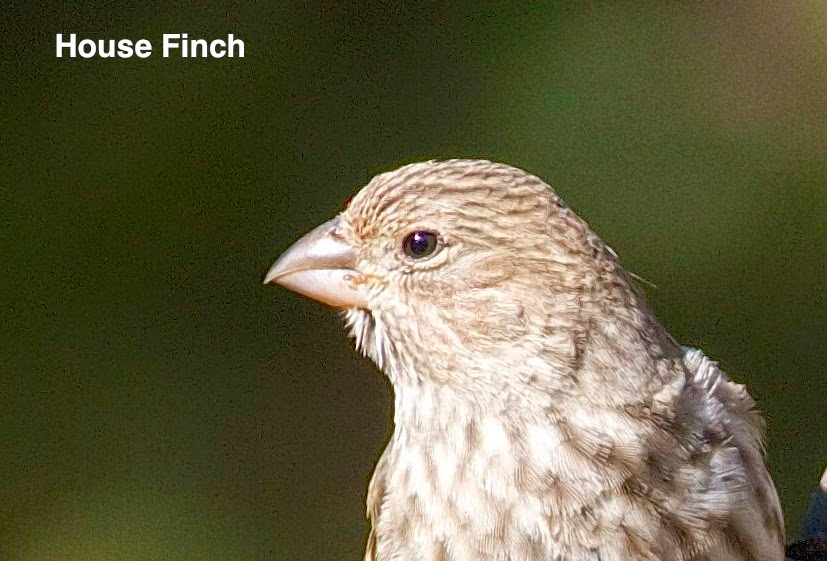 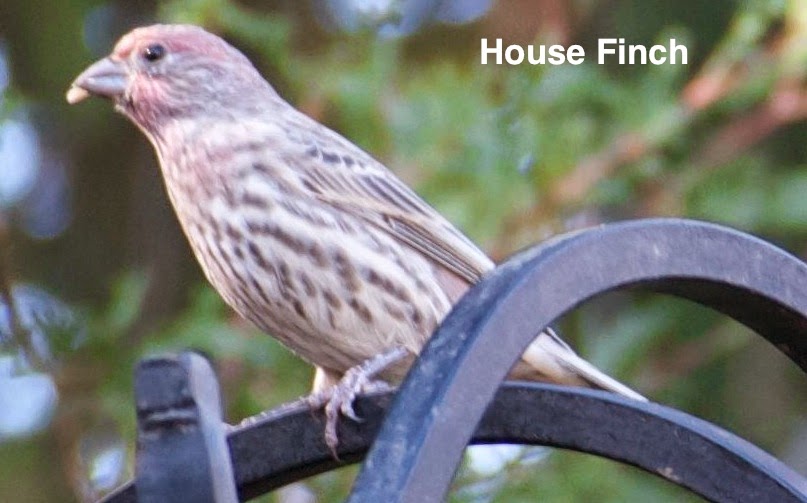 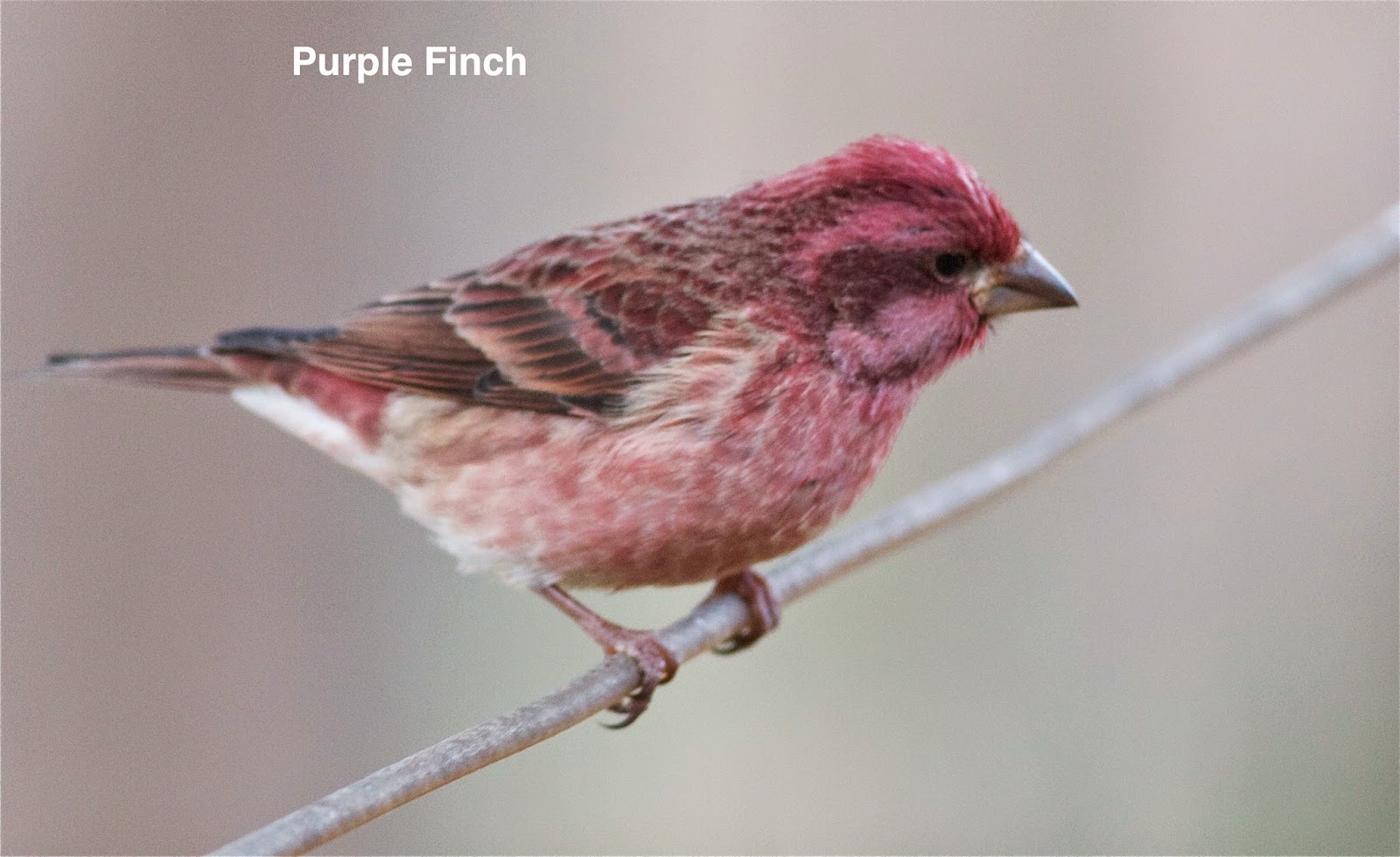 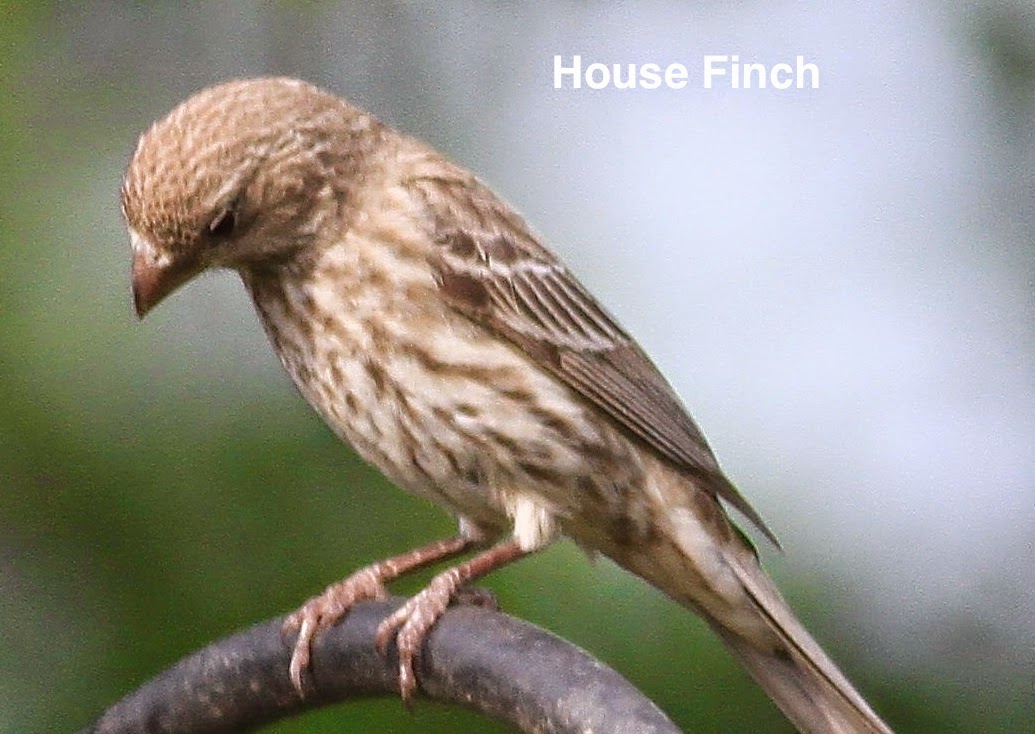 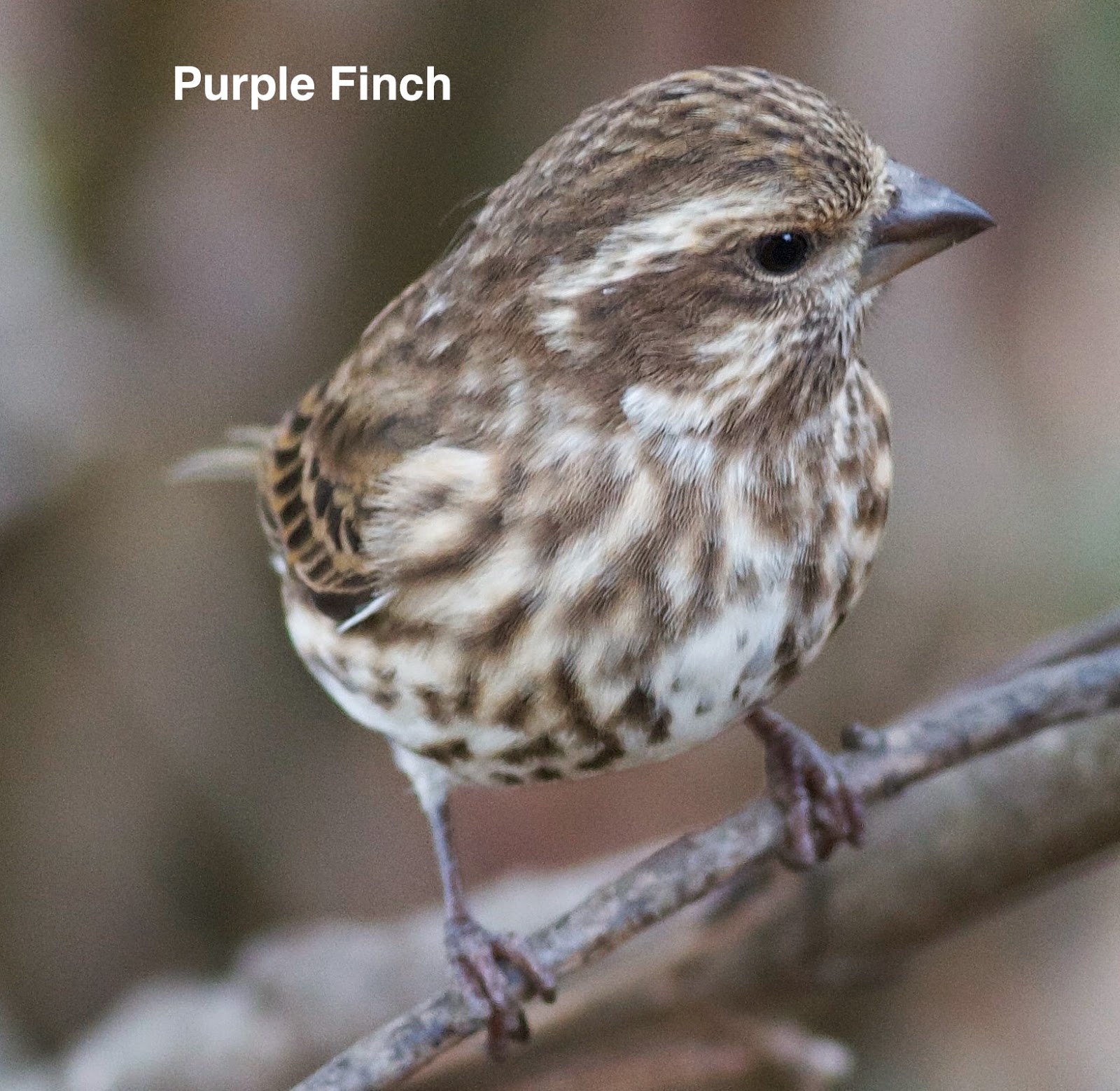 Even distant birds in flight can be identified if you get a good look. Concentrate on the general size and shape, overall color, rump color, tail and flanks. 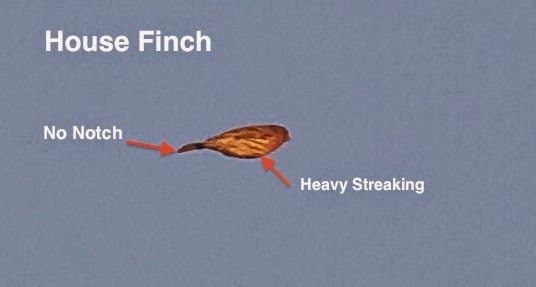 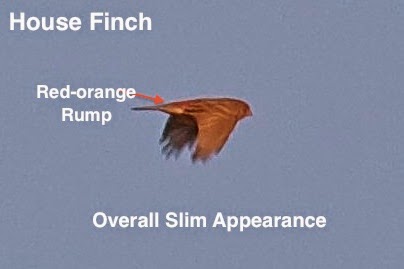 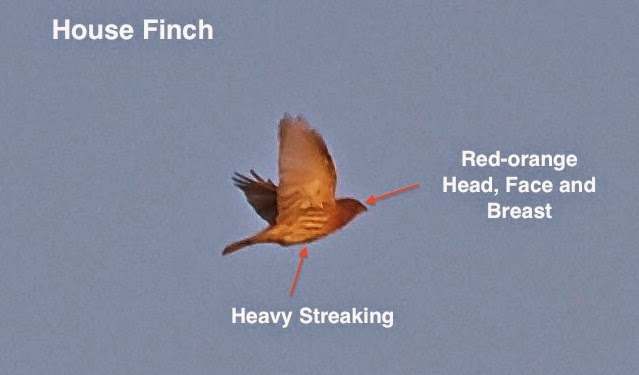 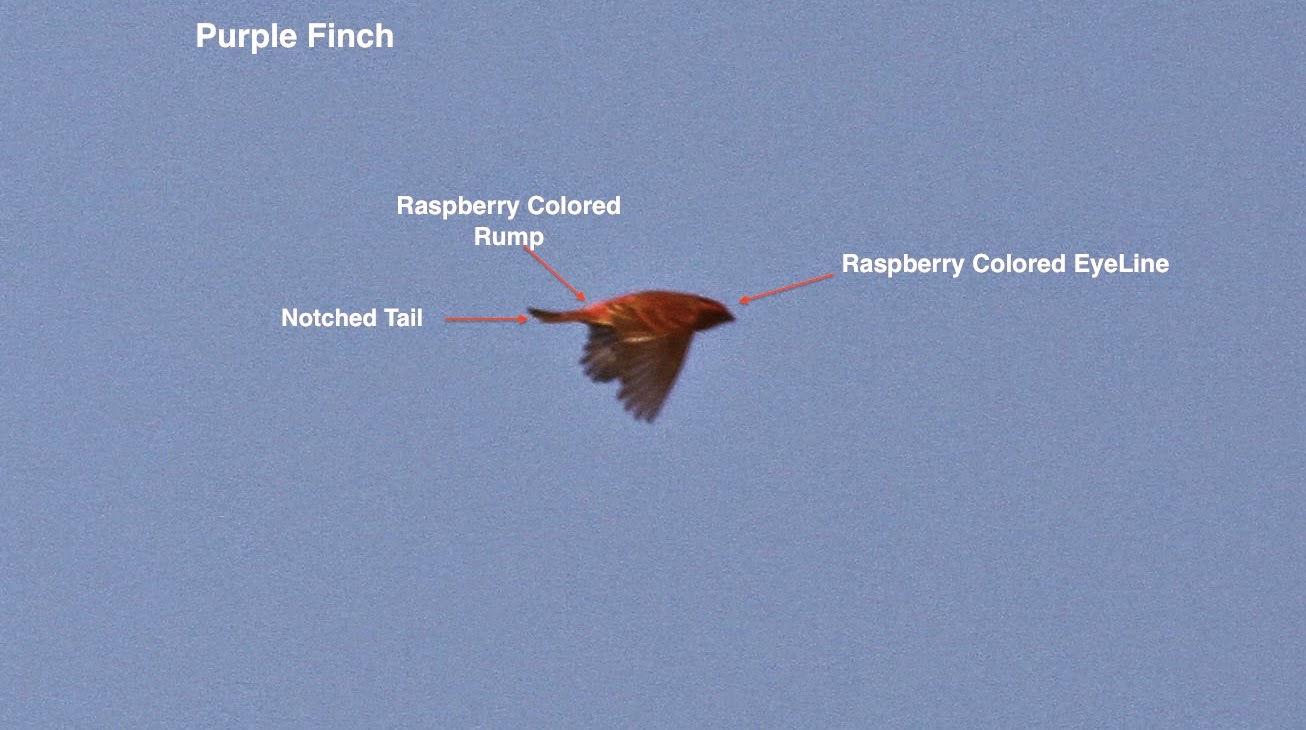 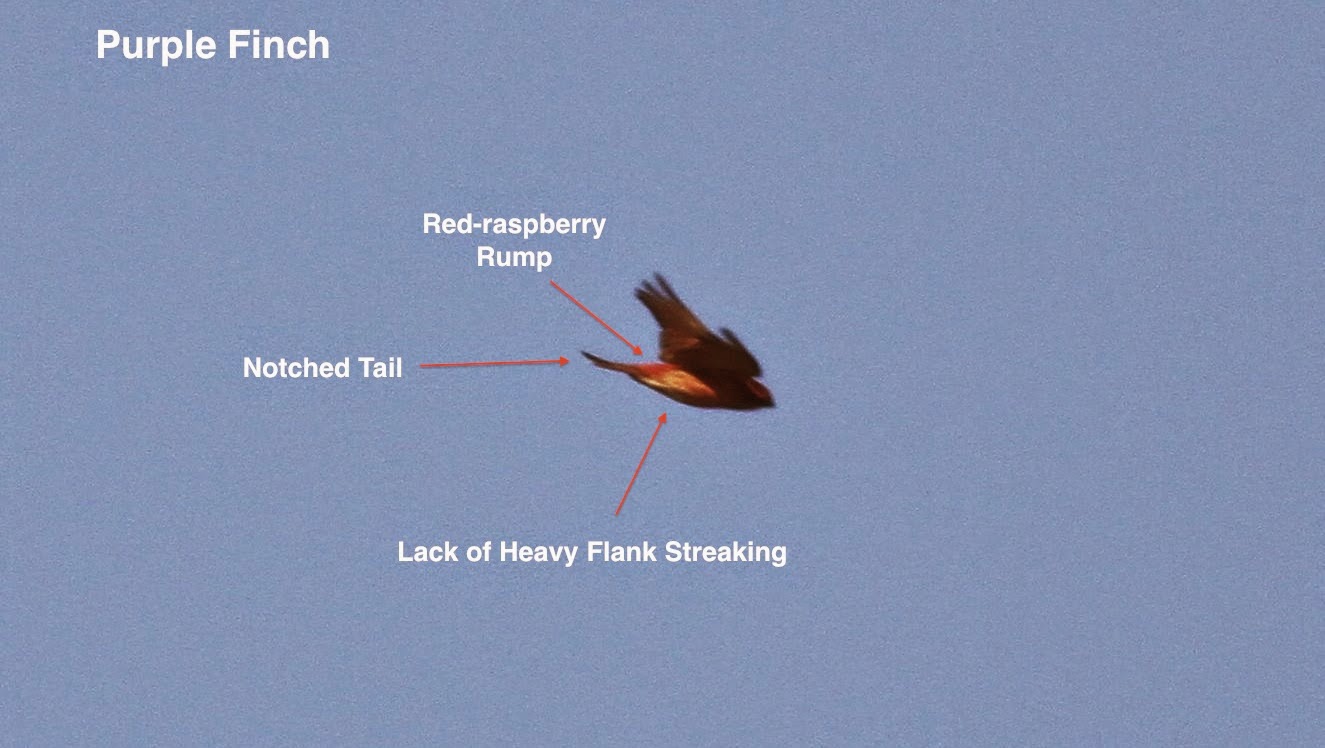 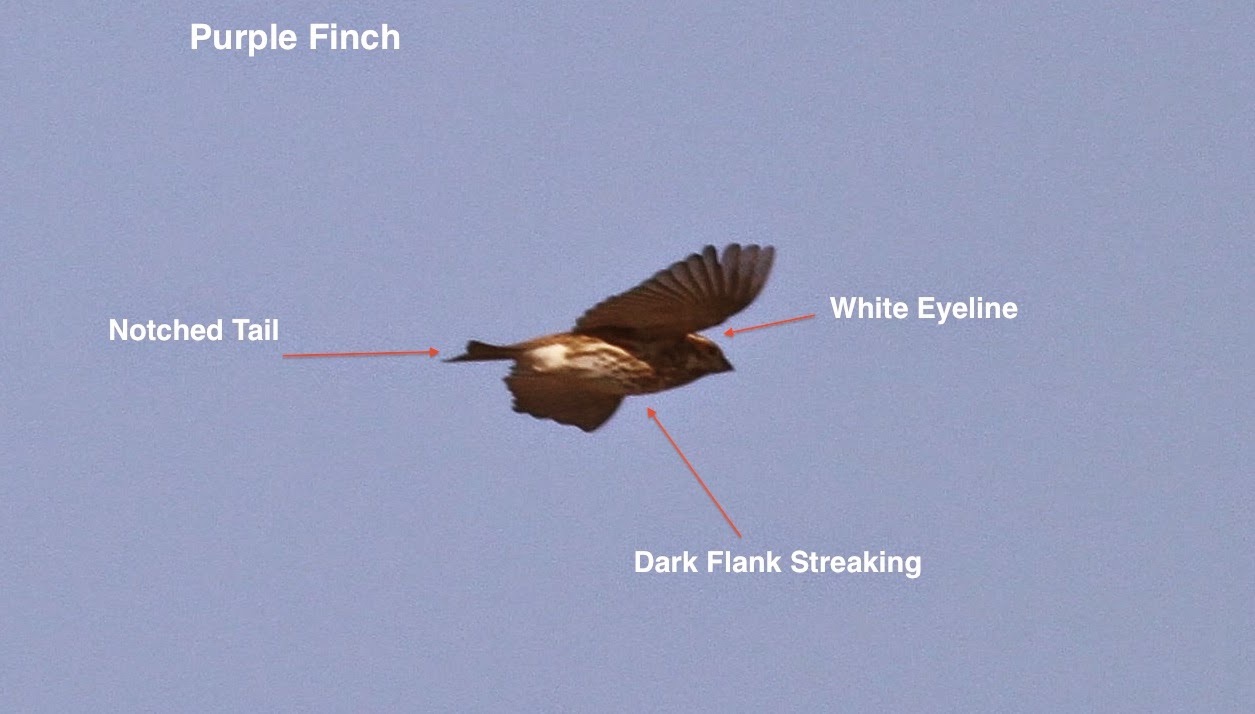 Call notes – Luckily for us, both species call frequently when flying. Learning the call notes of both species will go a long way in helping you make the identification. I would guess that about 70% of the Purple Finches I have identified this fall have been “heard only” birds passing overhead.

House Finch makes a “cheep” similar to a House Sparrow.

I hope this blog will help with your finch identifications.


Photographs by the author.

Posted by Nick Pulcinella at 5:57 PM No comments: