Instead of writing a narrative about our trip I thought I would just post some photos from the first two days in Florida and maybe later right another blog post about the rest of the trip, or not.

These deer are actually just a subspecies of White-tailed Deer. They are about the size of a large Greyhound. Dog not bus. 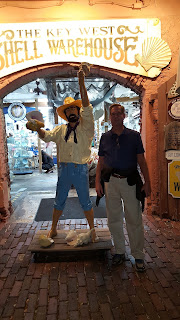 Posted by Al Guarente at 9:56 PM No comments:


I was browsing the internet one morning and a super deal materialized before my eyes. Southwest Airlines was advertising a flight to Fort Lauderdale for $68 round trip. So I told Sharon and we pounced on the opportunity to skip the winter weather for a brief period time.  Having done some research ahead of time on eBird, we knew we had to head north to a little place named Richardson Historic Park and Nature Preserve. We arrived in Fort Lauderdale around 10:30AM and immediately drove to the park. This was the location of a Bananaquit that has been hanging around for about 3 weeks. When we arrived we met two women birders who were searching for birds but didn't know about the Bananaquit. We all walked the park, which was quite small and found very little activity.


I had seen recent reports that the bird was also seen near the bordering condos, so Sharon and I headed back to the parking area. As we walked out of the park a gentlemen asked if we were looking for the Bananaquit and he told us it was over near the condos. We promptly hoofed it to the housing development. Upon our approach we observed a multitude of birders spread out along a very thick hedgerow.


We quickly merged with the crowd and picked our spot to start ferreting out the little rascal. We lingered about five minutes then suddenly I saw a little bird traisping around the inside of the bushes but couldn’t get a decent view. For the next five minutes the birders kept getting little peaks here and there but nothing to confirm that this was our bird. Finally, the bird landed in the open on a large flower and started picking at the stem of the flower. This was our bird. It was a tiny, warbler sized individual and had a bright yellow breast. It also sported a broad white stripe over it eye.

This was an ABA life bird for me and we found it within an hour of landing in Florida. As I looked around at the other folks who were giving out high fives, I noticed a familiar face. Standing right next to me was Greg Miller. You might remember him from the movie “The Big Year” where his character was played by Jack Black. I introduced myself and we started chatting. I found out that this was a life bird for him. However, unlike Sharon and I who got to see the Bananaquit on our first attempt, this was his tenth try at seeing this bird. Needless to say, he was real pleased.


As we sauntered back to the parking lot, I heard and quickly found my first flock of parakeets. A quick study of the flying flock revealed them to be Mitred Parakeets, a species I have only seen once before in the San Diego area. It was nice to see them again even though they are an introduced species.


After this sighting we headed to lunch and planned the next portion of the day. We would drive south to Key Biscayne, an island just south of Miami. On Key Biscayne was a marina that reportedly held a Common Eider. We spent 20 minutes perusing the marina but dipped on the Eider. This, we would later find out, was a costly 20 minutes. Crandon Park was the next stop on the key and was only three miles away. We stopped here in search of our second lifer today. We were hoping to find the Western Spindalis, a Caribbean tanager that occasionally is seen in Florida.


Sharon and I had made two previous attempts to find this bird in past years and failed both times.  So we were hoping the third time would be the charm. We arrived in the parking lot and saw a few birders meandering around the area so we were hoping that the extra eyes would help in our search. We walked over to the group and asked if the bird was still around. The one gentleman birder told me that we just missed it. It was seen about 20 minutes ago. Does that 20 minutes ring a bell? So while we were waiting around I spoke to the gentleman that had seen it as he was packing up to leave and found out that he was from Pennsylvania. The Scranton area to be more precise. His name was David Trentley and we introduced ourselves. We both said that we recognized each other from posting on the internet and eBird. Small world.
Well, we spent the next three and a half hours wondering around the park to no avail. However, we did find Magnificent Frigatebirds, Tricolored Heron, Brown Pelicans, Piping Plovers, Lesser Black-backed Gulls, and many warbler species including Black-and-white, Northern Parula, Yellow-rumped and Prairie Warblers. Some other species are also shown below:

While Sharon and I were in Florida recently, we spotted this Loggerhead Shrike eating a lizard while we were in search of a Groove-billed Ani. I thought it was kind of cool, so I'm sharing it with you.

Posted by Al Guarente at 4:07 PM No comments: