We are off again to California to visit with and babysit Max. But first we have five days to bird in southern California. We arrived on March 13th at LAX and immediately headed south on I-5 and then the Pacific Coast Highway. Our first stop was Bolsa Chica refuge in Huntington Beach. This is always a good stop for birding.

We immediately saw Elegant, Royal, Caspian and Forster’s Terns, along with Marbled Godwits, Long-billed Dowitchers, and California and Western Gulls. The highlights there were two Reddish Egrets, Blue-winged Teal and Horned Grebes all of which were new state birds for me.
Wednesday morning we headed right to the Oceanside Pier, which is the longest wooden municipal pier on the west coast, extending out 1,942’ into the ocean. Before we started to walk out on the pier, I set up the scope and spotted a shearwater flying along the wave tops. I thought that this had to be a Black-vented Shearwater but I wasn’t certain. So we started out onto the pier for a closer view. As we were walking out to the end of the pier we could see Western and Clark’s Grebes and Western Gulls.
At the end of the pier we met two local birders. They pointed out that the large number of alcids that I had been seeing were Common Murres. There were also about 200 Pacific Loons with a spattering of Red-throated Loons flying past. At one point I noticed two birds coming towards us and identified them as Rhinoceros Auklets. Then I spotted another shearwater flying north and could see that it was indeed a Black-vented Shearwater, my first lifer of the trip.
The two birders suggested we go to Calavera Lake to do some inland birding, so we tried it. It was a good move as were added a large number of birds. We saw California Quail, Wrentit, Lesser Goldfinch, Orange-crowned Warbler, and Bullock’s Oriole along with many ducks and grebes.
After lunch we headed south to La Jolla. This is a town with a very nice park along the rocky beach shore and a deep water ocean just offshore.
Because of this you can view many sea birds closer to shore than usual. There were lots of Black-vented Shearwaters flying around and many floating on the waves not too far offshore. We were able to see the brownish-black upper parts and the white under wings surrounded by a dark border, very similar to Manx Shearwater. Along the beach there were Harbor seals and their pups.
One bull Sea Lion claimed one large rock as his own. Since this was a rocky shoreline, one of the birds I expected to find here was a Wandering Tattler. This is a bird I have seen in Hawaii, but needed for the ABA area.
Fortunately, Sharon spotted one among the rocks and came to show me, but when I got there it was gone. So we started searching nearby rock islands and fortunately I was able to rediscover the bird sitting on the Sea Lion rock. Other birds in the area were Double-crested, Pelagic, and Brandt’s Cormorants, Spotted Sandpiper and Brown Pelicans.
On the drive to San Diego we had the windows down and suddenly we heard this loud raucous and I quickly turned into a parking lot and parked the car. I got out and looked in the trees and discovered about 30 Mitred Parakeets. It was neat to see but unfortunately these guys aren’t countable in the ABA area.
Thursday arrived and we started out early to some refuges because Balboa Park in San Diego didn’t open until later. So we headed to Tijuana Slough NWR. We got our refuge book stamped there and found out that the Clapper Rails that we were watching had been the endangered light footed race. Also at the slough were several Long-billed Curlews and Whimbrels.
Heading east from San Diego we drove to the Laguna Mountains and to Cleveland National Forest. We started to climb in elevation and started getting into pine woods instead of the usual sage brush.  We started finding Western Bluebirds, Western Kingbirds, Acorn Woodpeckers, Mountain Chickadees, Lark Sparrows and a Band-tailed Pigeon. From here we headed to the town of Borrego Springs which is in the high desert. Friday morning we had breakfast at the restaurant in the hotel and Sharon enjoyed a cactus omelet while dining outside. In Borrego Springs we managed to find Cactus Wren and Sage Thrasher.
As we left town we drove east along a scenic route through the high desert badlands and surrounding mountains as we headed for the famous birding area of the Salton Sea. At the Salton Sea we quickly found Black-necked Stilts, Avocets, and lots of gulls and grebes.
At the Sonny Bono NWR, at the south end of the sea, we heard Marsh Wrens, Virginia Rail and saw White-faced Ibis and Pintails. When we visited the Headquarters building of the refuge, we were treated to Common Ground-Doves, Gambel’s Quail, Great-tailed Grackles and Burrowing Owl.  We were not having any luck with the Yellow-footed Gull that was the object of this destination. So we try another side road and found Cinnamon Teal and Common Gallinule. So we started to head north around the eastern portion of the sea and saw a road to the Red Hill Marina. We drove to that area and saw hundreds of gulls in the shallows and started scanning. But again, no luck. We drove around to the far end of the marina hoping to get to an area where we weren’t looking into the sun. I started to scan the gulls and found a dark backed gull that was definitely larger than the California Gulls present. The blocky head, the large white tertial tips and very large and long bill confirmed that this was in my lifer Yellow-footed Gull. So as of now I have two lifers and one new ABA bird. Good trip so far.
Posted by Al Guarente at 7:00 PM No comments: 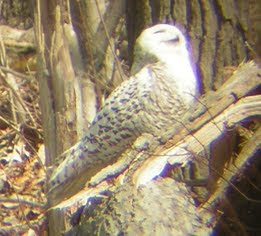 Who would have believed that a bird discovered in November would remain all through the winter and still be easily seen on a sunny March day! Yes, this is the Snowy Owl at Merrill Creek Reservoir. If you have not gone to see it yet, do not delay. I'm sure hundreds of people have seen this particular visitor from the tundra by now. I was probably one of the few "local" birders who had been unable to find the time to make the trip, but my luck finally changed on St. Patrick's Day. After the 1.5 hour drive, we parked at the gate on Reservoir Rd and made the short and easy walk down the paved access road to the base of the dam. Our quarry was napping in plain view on a fallen tree at the edge of the woods on the right side below the dam. Occasionally it would turn its head or stretch its neck, but mostly it just rested peacefully. (Snowy Owls are not known for high levels of activity during the day.) Never before have I seen a Snowy Owl under such pleasant conditions. The last one I saw was on Cape Cod a few years back, after having tromped a significant distance down the beach through the snow. I was bundled in several layers with only my eyes peering through the opening in my face mask as the wind brought tears to my eyes. Shirt sleeves and 62 degrees definitely increase the enjoyment factor. It hardly seemed right that Kristen's first Snowy Owl could be that easy! 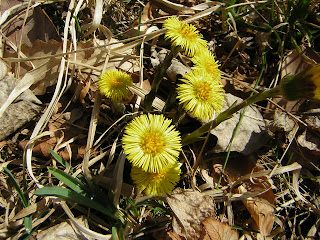 Besides the owl, we had a calling Eastern Phoebe (spring meets winter), a singing Brown Creeper (from the trail along the top left of the dam) and a flyby Pileated Woodpecker. Kristen and I hiked up the left side of the rocks, walked across the top of the dam and came back down the trail on the right side. Be advised that this loop is rather steep and will leave your legs aching. (Karl wisely remained at the dam base "guarding the scope" and showing the owl to all passersby.) He enjoyed the blooming Coltsfoot, pictured above. This alien herb, used for cough suppression, is so-named because its leaves resemble a colt's foot. (The leaves only appear after the flowers.) We also noticed a hatch of some species of caddisfly. The individual pictured below landed on my camera case. Following our visit to the owl, we made a quick stop at the inlet/outlet lot and walked the trail to see Mrs. Bald Eagle sitting on her nest. (Stop where the large tree has fallen over to the left and look down toward the water.) She turned her head but did not seem concerned about foot traffic within sight. 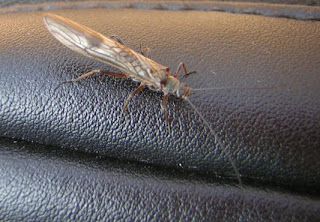 The visitor center at Merrill Creek has a chart of "first" dates for a variety of species (flora and fauna) which was intriguing to examine. They also have nice facilities and several fine exhibits, including classrooms used for education.

Posted by Sheryl at 5:08 PM No comments: