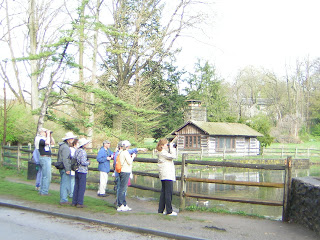 Twelve people joined me this morning for a walk around the Haverford College campus. Here are members of the group watching rough-winged swallows at the duck pond. Warblers are starting to move through with some new arrivals overnight. We watched a very cooperative black and white warbler as it inspected tree limbs in search of a tasty tidbit. There were also several yellow-rumps and yellow warblers. A couple of blue-headed vireos were heard and/or seen, but the warbling vireo behind the pond was more elusive. Baltimore orioles and eastern kingbirds were very vocal. One kingbird got into a tiff with a blue jay, presumably over the entitlement to sit in the high branches of the sycamore tree. Blue-gray gnatcatchers were busy buzzing around. They, too, prefer sycamores and are likely to build their nest high on a branch near the pond. Speaking of nesting, a pair of eastern bluebirds seem to have laid claim to a box in the pinetum not far from where Mrs. Redtail is currently incubating. A singing brown thrasher was a good find. Unfortunately, there is no longer enough brush on campus to encourage them to nest here. We also noted far too many brown-headed cowbirds this morning. They will make it difficult for our chipping and song sparrows to raise their own young. This afternoon I heard a black-throated green warbler, and late this evening, a male ruby-throated hummingbird came for a drink at my feeder. I'm looking forward to good birding in the next couple of weeks. Join me next Sunday for another walk around campus, beginning at 7:30 AM from the South Lot.
Posted by Sheryl at 9:30 PM