Shorebirds Over the Pennsylvania Piedmont

During the last week of May, and the first week of June, we here in SE PA can be treated to a phenomena of the bird world like none other--the early evening flight of thousands of shorebirds that have just taken off from the Delaware Bay shores heading to their breeding grounds in the far reaches of the north. Birds like Red Knot, Sanderling, Ruddy Turnstone, Dunlin, and Whimbrel are among the many that will make the journey to the arctic region to breed, and some will pass over Delaware, Chester, Montgomery, and Bucks Counties while there is still daylight available, and at low enough altitudes that we can see and identify them.
The Bucktoe Creek Preserve, a privately owned 297 acre preserve in Kennett Square, Chester County, has been hosting a shorebird watch which started 25 May and will continue through 5 June. The first few nights did not hold shorebirds over our fields, but on May 28, the "birder host" of the event, Larry Lewis, watched Red Knot and Dunlin grace the skies in a group of approximately 200. Other shorebirds were seen in flight, but due to distance, couldn't be identified. The southerly winds and calendar date continued to give us hope. But, all was quiet until May 31st.
I had a feeling things might be good for shorebirds taking off from the Bay that Tuesday evening when I noticed the forecast in Lewes, DE was posting SE winds. I didn't get to the watch site until 7:28. At that time, Larry Lewis told me and the preserve manager, William, that we had just missed (by less than five minutes), a group of Red Knot. Disappointing to hear we had missed them, but optimistic more were to come, I settled in. Within two minutes Larry was yelling "Here they come!" I looked up and saw without binoculars a big flock of birds heading straight towards us. I got the camera ready to go, and was lucky enough to capture some decent record shots of this first flock of birds as they were nearly overhead. This group came in so close that when they banked and turned, we could hear the wind against their wings, and some of the birds calling.
After this flock, we had a steady stream of various groups allowing for photos and viewing in the scopes. The most popular migrant this night appeared to be the Ruddy Turnstones.
Some of the flocks were just too distant to identify to species, and were just silhouettes against the evening sky....

As sunlight diminished, we continued to see the flocks of shorebirds, but seeing much detail became near impossible. Our last flock flew over around 8:35 pm. At this point, it was becoming difficult to see much. We felt pretty sure the streams would keep coming through the night, but would go unnoticed in the dark.
We felt lucky to have witnessed an amazing flight of shorebirds over Pennsylvania, and were happy to have wished them well on their long journey north.
8:35pm flock pushes northward 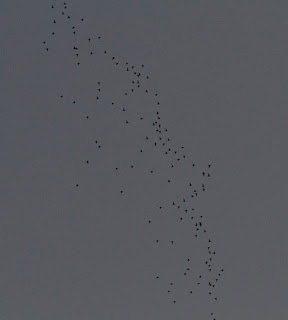 More information on the Bucktoe Creek Preserve can be found at www.Bucktoecreekpreserve.org
The shorebird watch runs from 3pm til dusk until Sunday, June 5th.
Posted by Holly at 7:43 PM