I was searching eBird and had been watching the sightings of a Western Spindalis in southern Florida. I just so happened to be looking at flights on Southwest Airlines for a future flight and noticed a flight to Fort Lauderdale for only $59, so Sharon and I jumped on the opportunity. We landed in Florida
after a three hour flight and picked up our rental car and immediately drove to Markham Park where the Spindalis was hanging out.

We arrived at the park and found several people walking around searching for the Spindalis but as of yet no one had seen the bird today. The bird was reportedly hanging around with a small group of Spot-breasted Orioles and we found the orioles several times but no go with the Spindalis. 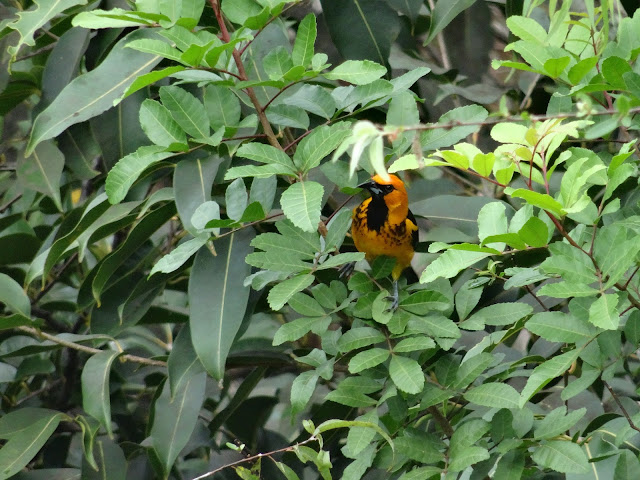 While in search for our target bird we also found Mottled Ducks, Anhinga, Cattle Egret, White Ibis, a dark morph Short-tailed Hawk and lots of Palm and Yellow-rumped Warblers plus one Prairie Warbler.
We searched for the bird for about 3 hours with no luck and it was getting late, so I decided to drive across Florida on the Alligator Alley to the Gulf Coast and take a chance on finding the American Flamingo at Fort Myers Beach. We made the two hour drive and arrived around 4:30PM. We parked at Bunche Beach Park and made our way to the beach carrying my scope and binos. When people saw the optics we were carrying they immediately knew what we were after. They told us the Flamingo was standing out in the water fairly distant from shore. We were in luck! We got to the beach and could see the flamboyant Flamingo standing about 300 yards out from shore, yet the water was only up to the bird’s knees so the water depth was about 18’” deep. We set up the scope for a better view and could see the brilliant pink plumage and the odd downward curved bill with a black tip. 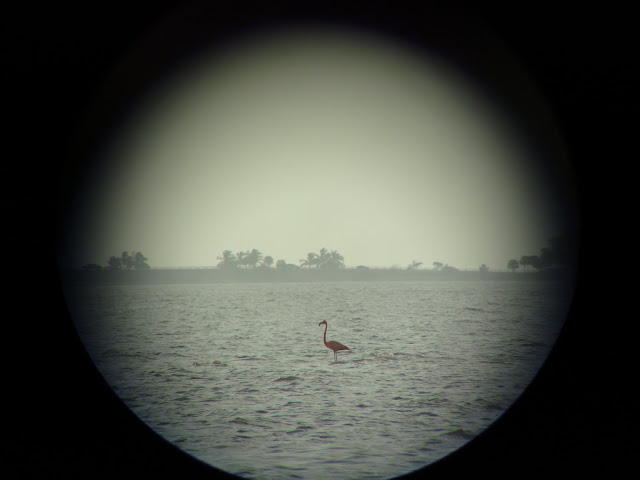 This was a life bird for me and one that I’ve been waiting for 50 some years to find. I remember seeing them when I lived in Florida but they weren't countable because I saw them at the Hialeah Race track and they were all wing clipped birds.


After viewing the Flamingo for a while we walked the beach for some distance and were able to find a white morph Reddish Egret. The bird was not shy and I was able to get some close photos. 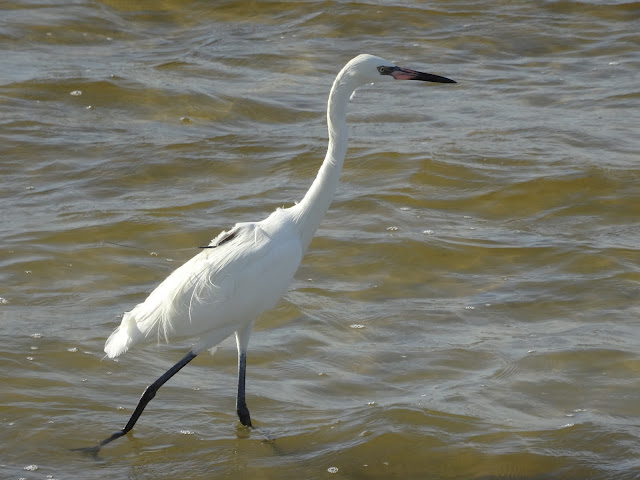 When we got back to the beach entry point I set up the scope again to view the Flamingo. Once I did this we had a mob of people wanting to take a peek through the scope to view the Flamingo. The people were from Massachusetts, Ohio, Michigan, Minnesota and elsewhere. They were very excited to see the bird and thanked us profusely. While everyone was watching the Flamingo it took off and we observed the long outstretched neck and trailing legs making the bird look larger than life. Also while in flight we noticed the contrast in the pink wing coverts versus the jet black primaries and secondaries.
Another short walk along the beach in the opposite direction produced Black Skimmers, Caspian and Forster's Terns, Short-billed Dowitchers, Marbled Godwits, both White and Brown Pelicans and Black-crowned Night-Heron.
So after an unsuccessful attempt for the Western Spindalis we were rewarded with a life bird on the gulf coast. We were happy with the Flamingo and were looking forward to tomorrow's drive back across Florida on the Tamiami Trail.
Posted by Al Guarente at 10:33 AM