Today's weather was much nicer then the originally scheduled trip on New Year's Day. Today was a balmy 25 degrees versus the 0 degrees on New Year's. However, we still had to contend with winds up to 30 mph which made many participants, including myself, very tearful. I want to thank Nick Pulcinella for providing all the photos below with the exception of the American Bittern.
We left McDonald's at 6AM sharp and arrived at Port Mahon Rd on schedule to see the Short-eared Owls, which was our target bird. But as we were driving along the road, I spotted what I thought was an American Bittern flush up from the phragmites along the roadside. A hundred yards further we had to make a sudden stop, when to our surprise there was an American Bittern standing right in the middle of the road. The bittern stood there for everyone to admire and photograph although the lighting was very difficult as it was still quite dark.


As we moved on Nick and I both noticed movement about 200 yards ahead. We put up the binoculars and were treated to a gorgeous Snowy Owl standing on the rocks right next to the road. 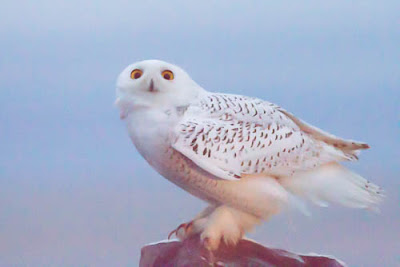 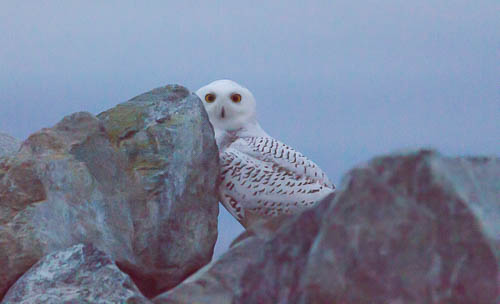 From Port Mahon Rd we did a quick drive along Cartanza Rd and had a nice Northern Harrier perform it's aerial agility. Making another quick stop at Big Stone Beach we only added Red-bellied Woodpecker and Yellow-rumped Warbler.

We than drove to Indian River Inlet trying to arrive in time for an outgoing tide. By the time we reached the inlet the winds were howling at about 30mph and I could tell the participants were hesitant to get out of their cars. Setting up the scopes along the waterway the first thing I noticed was the dearth of gulls and ducks. This is usually an area with a profusion of Bonaparte's Gulls and today we found only two.
However, with a little effort and searching the opposite jetty, we managed to pick out a few Purple Sandpipers and Ruddy Turnstones and then on the distant beach there were some Sanderlings. With tears rolling down my cheeks from the slight breeze, I was able to find one lonely fly by Northern Gannet. Nick found the Great Cormorant on the tower at the jetty terminus.

Nick was our professional photographer that we hired for the day and was able to get some good close up photographs of other birds at the inlet. 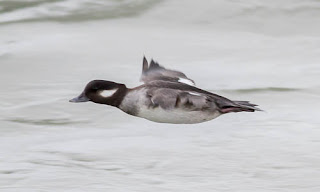 Other birds spotted at the inlet were, both Common and Red-throated Loons, all three species of scoters, several Long-tailed Ducks and Greater Scaup.


We started our drive north after finishing up at the inlet. We pulled over to scan Silver Lake in Rehoboth Beach and were treated to a large raft of Canvasback. We scanned for Redhead but could not find any mixed in with the Canvasback.
At Cape Henelopen we found Brown-headed Nuthatch and Snow Buntings along with more scoters, loons and Red-breasted Mergansers. At Broadkill Beach, part of Prime Hook NWR, Nick spotted a bird sitting on an Osprey nesting platform which didn't look right for a Red-tailed Hawk. We determined it was a light morph Rough-legged Hawk. When we got out of the car to set up the scope, Bruce Childs asked about another raptor flying around, which turned out to be a dark morph Rough-legged Hawk. Awesome.
We ended the trip a little earlier then usual due to the fact that we were being beat up all day long by the wind and most of us were dragging at that point. We totaled 74 species for the day which was a little below our average of 80. Nevertheless, it was a great trip with three fabulous finds, American Bittern, Snowy Owl and Rough-legged Hawk. Can't wait for next year.