Even though migration has wound down, I thought I would take a chance and sit at the river behind the Philadlephia Airport in case something strange would happen to show. I arrived around 9:30AM but low tide was going to be at 11:04AM, so I figured I would have a nice relaxing time waiting for the shoal to appear and attract some birds.
Eventually things started to land on the exposed mudflat. Two Caspian Terns landed and started preening. Ospreys were present in good numbers and one was actually taking a bath at the end of the spit. Finally, I was ready to go home and one more look revealed a couple new terns had arrived. Another Caspian and a smaller tern sitting next to it. The smaller tern had a distinctive white forehead and right away I thought "Least Tern", but  then I realized it was too large for a Least Tern and identified it as a Forster's. After viewing the tern, I worked the scope to the right about a glass or so and spotted, to my amazement, an American Oystercatcher. I was shocked, since this is a rare bird in Pennsylvania, let alone Delaware County, and it was also the second one I 've seen this year at the same mudflat. Unreal!
As you can see I managed a few poor photos, since the bird was about 1/2 mile away. But nevertheless they are undentifiable. 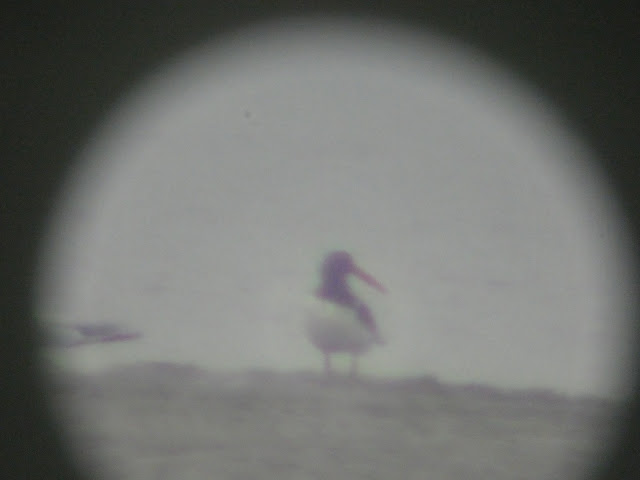