We started our trip back east across the southern edge of Florida by traversing the Tamiami Trail. This took us through 10,000 Islands NWR, Everglades City, Big Cypress Wildlife Management Area, Fakahatchee Strand Preserve, and Shark Valley region of the Everglades National Park.
Our first stop at 10,000 Islands NWR didn't produce much in the way of birds but there was a program going on there trying to educate the public about the wild introduced Pythons and about how they are trying to capture and control the spread of the python throughout southern Florida.
At Big Cypress National Preserve we saw the largest remaining stand of cypress in the U.S. Driving through the area we found Alligators, turtles, and my favorite, Manatees. 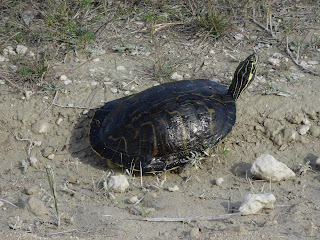 Driving through the Cypress forest gives you an idea of how Florida used to be before the Spaniards came. 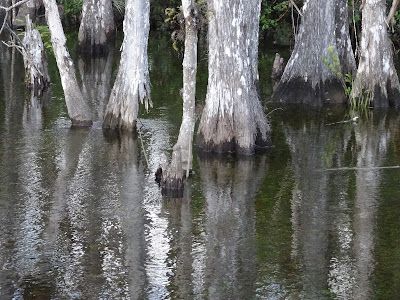 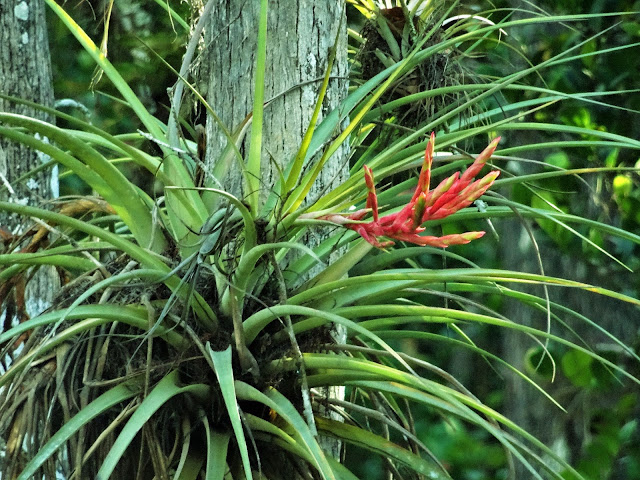 Along the Tamiami Trail within the Big Cypress Preserve is the smallest post office in the United States, or so it is claimed, but I can believe it.

Driving on we reached the Everglades and were treated to the sight of a Peregrine Falcon hunting right over the road. A few miles later we found a Snail Kite flying over a roost of White & Glossy Ibis.
We spent the night in Florida City at the Best Western and had an elegant dinner at Burger King. After a long day of driving we were looking forward to the hot tub but the hot tub at the hotel was anything but hot. You might classify it as slightly warm.
The following day we headed out to Castellow Hammock Park near Homestead. 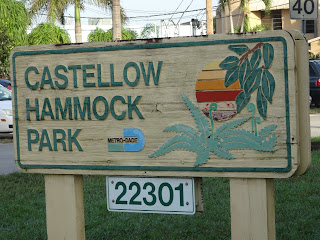 Today we were trying for the Buff-bellied Hummingbird that has been seen there on occasion. So we planted ourselves in front of the butterfly garden. The flowers that the hummers enjoyed was an unfamiliar variety. If you know what they are, let me know. 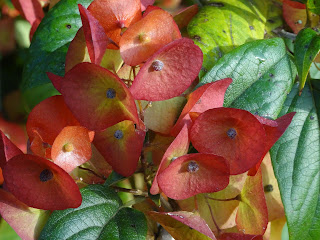 We could hear a hummingbird calling in the thickets and then one came into view. However it was a dissapointment because it turned out to be a Ruby-throated Hummingbird. Now I know the call of the Ruby-throated and what I was hearing was not a Ruby. Finally another hummer made an appearance and we could see the bright green head and breast and the buffy belly of the Buff-bellied Hummingbird. 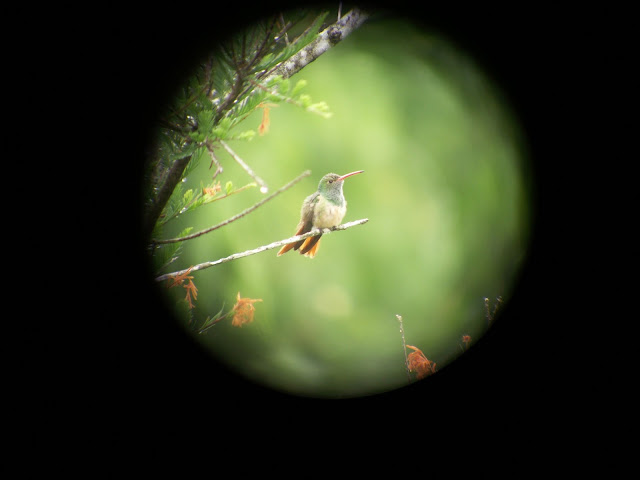 After spending about thirty minutes with the hummer we headed south to the Everglades National Park. On the way we had to make a quick stop at "Roberts Is Here", a renowned fruit stand not far from the national park. They claim to have the southern most Purple Martin house in the USA. The Purple Martins had already arrived there and were setting up nest while fighting with the House Sparrows. 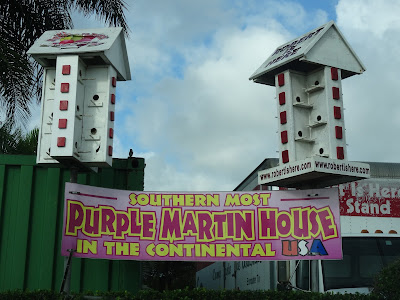 Before we got to the Everglades we made one more stop at Lucky Hammock on Aerojet Rd. There was supposed to be a Western Kingbird along the road but all we found were three Common Ground-Doves. I thought I remembered from years ago that there was another road directly across the intersection from Aerojet Rd. So when we got back to the main road I was surprised that there was no road across the street, So we continued on and drove to the Everglades. Arriving at the park which was only a mile or so away, Sharon talked me into turning around and going to look again for that other road. But before we even got back to Aerojet Rd I spotted the Western Kingbird on a wire and we pulled off the road and had a nice peek. After that we did a u-turn and as soon as we were facing the other direction I spotted a Scissor-tailed Flycatcher perched in a dead tree almost directly across the road from the Western Kingbird. What a treat that was. 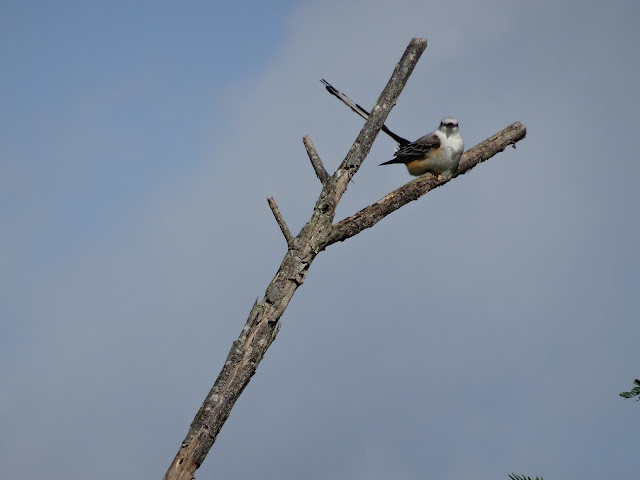 Next we entered the park and drove to Gumbo Limbo Trail. The parking lot is famous for the Black Vultures that eat the rubber off of your car so the park service provides tarps and bungee cords for you to borrow to protect your car.
The month of January almost set a record for the amount of rainfall in southern Florida this year, so the water levels were extremely high. This proved to be to our disadvantage as the wading birds just weren't present this year. We only found a few Purple Gallinules and a great Blue Heron along the whole trail. 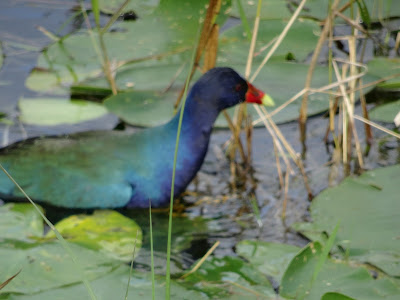 We then moved on to Lone Pine Picnic area and ate our Subway sandwich with a few crows and lots of Yellow-rumped Warblers. 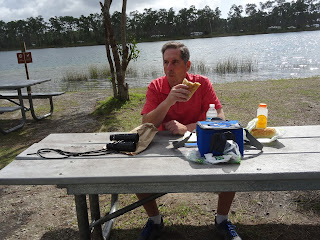 We finally worked our way down to Flamingo, the southern tip of the Everglades. We started seeing more birds here like Black Skimmers, Pelicans, Marbled Godwits and Willets. 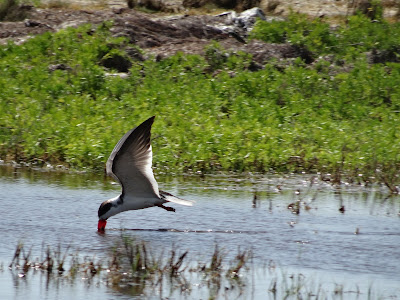 In the visitor center they had some neat pictures that an artist painted. One of turtles and the other of birds illustrating wingspans. See below

Outside of the visitor center was a very cooperative Little Blue Heron and also a large flock of White Ibis. 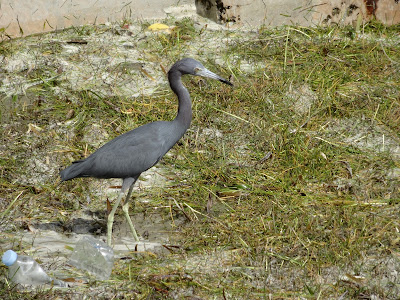 On the way back we found a new lifer, only this time it wasn't a bird.  We found this 12 foot long American Crocodile. While we were there some lady was dumb enough to walk very close to this monster and snap a selfie.

Other things of note were lots of Butterflies and we found some seed pods of a Mahogany Tree which I've never noticed before.

The journey out of the park was uneventful and we decided to go back to Markham Park again for another try at the Western Spindalis. This time the winds were about 30 knots and everything was staying in hiding. We found one Ruby-throated Hummingbird, some Wood Storks, Cattle Egrets, Loggerhead Shrike, Monk Parakeets and Painted Bunting but no Spindalis. 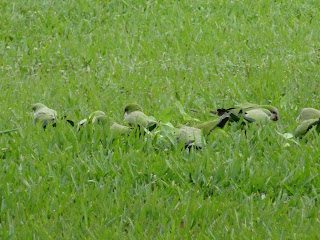 After this we called it a day and found a nice hotel and had dinner at Bonefish Grill. A little more elegant then Burger King the night before. More birding tomorrow.
Posted by Al Guarente at 8:58 AM