Sunday morning we arose and ate breakfast at the hotel and drove back up to Merritt Island NWR. Unfortunately the winds today were about 30-35 mph and that had a really bad affect on birding. We drove the loop called Peacock Pockets which seemed to take forever and it was a one lane road but two way traffic. It was a real treat when someone was coming from the opposite direction. Anyway, like I said before the birding was really slow. We did add Surf Scoter, Common Loon and saw Common Ground-Doves again.

Once again we drove the wildlife loop and didn't really add anything new, so we headed Canaveral National Seashore. 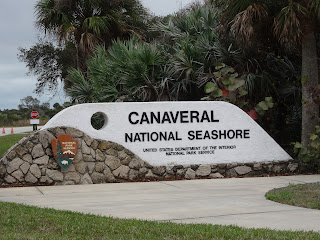 If we thought the wind was bad in the refuge when we got to the shoreline it was wicked. I couldn't hold the scope steady to see much of anything. I managed to find some Royal Terns and a few distant Gannets out over the ocean but that was about it. There were also some Willets on the beach along with Ruddy Turnstones and Sanderlings.

When we got to the northern section of the Canaveral Seashore the places that we visited were a little more out of the wind. We visited the Turtle Mound Archaeological Site which is the largest shell midden on the mainland United States, with an approximate height of 50 feet. The mound extends for over 600 feet along the Indian River shoreline and contains over 35,000 cubic yards of shells. The turtle-shaped mound contains oysters and refuse from the prehistoric Timucuan people. Archaeologists believe that these people may have used this site as a high-ground refuge during hurricanes. It was basically a place where the Indians dumped their empty shells after use. 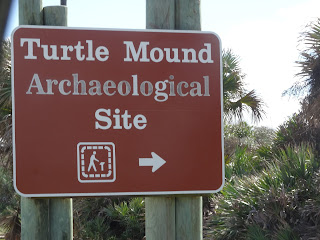 On the drive in we managed to finally see an Armadillo . 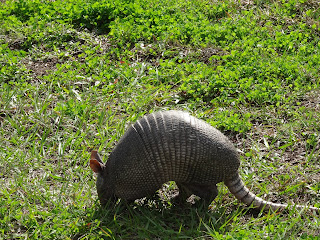 After this we headed inland to Lake Woodruff National Wildlife Refuge. We arrived around an hour before sunset and did a quick walk through and the only new bird we added were Sandhill Cranes. So we called it a night after a tough day in the winds.
Monday morning found us at DeLeon Springs State Park for breakfast. We tried several years ago to visit this restaurant in the state park but it was too crowded so this time we arrived early.

We were the first ones there and got a seat right next to the fireplace. That was a good thing since there was no heat in the building and it was quite chilly. 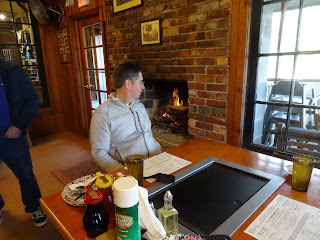 Sharon choose this restaurant because you get to make you own pancakes right at the table. As you can see in the photo the grill is built right into the table. This also help with the chill as you could use the grill as a hand warmer. 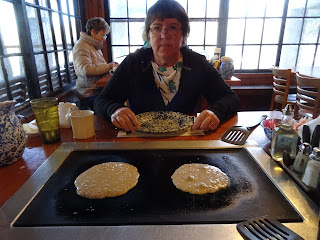 From the photo of the restaurant you can see the small waterfall next to the bridge. There was actually a few manatees hanging around there but staying a little too deep for a photo. Next stop was at Blue Springs State Park. If you ever want to see manatees this is the one spot in Florida that you must go. We arrived there and after a little hike we got to the river and the viewing platform.
Taking a peek over the edge there must have been 30 manatees swimming around the dock. 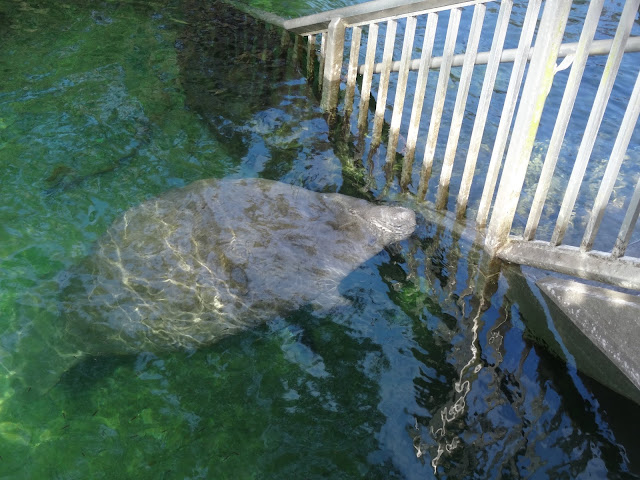 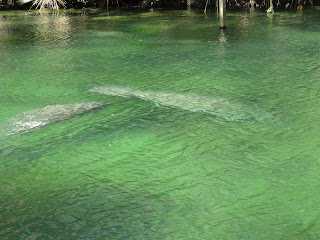 They park service says that there are approximately 300 manatees that come into the warmer waters of the river from the ocean at this time of year. Florida manatees are found in shallow, slow-moving rivers, bays, estuaries and coastal water ecosystems of the southeastern United States. They can live in fresh, brackish or salt water. Along with the manatees we could see the large fish known as Gars swimming around and sometimes breaking the surface.
It was now around noon and we headed back to the coast to the Ponce Inlet Lighthouse and jetty. We drove down the long peninsula along the coast and arrived at the lighthouse park. 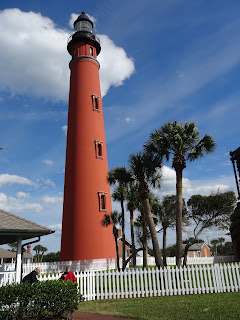 We had lunch at a great restaurant on the water called Down The Hatch. It looked like a shack on the outside but was very nice inside. After lunch we went into Lighthouse Point Park to visit the jetty. 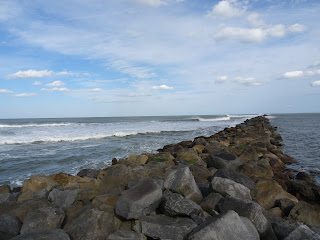 There were a few birds I needed for Florida and hopefully I could find them here. One was the Lesser Black-backed Gull which we could not find and the other was a Purple Sandpiper. A short walk out to the jetty produced Ruddy Turnstone and finally one Purple Sandpiper.

After finding the Purple Sandpiper we had to drive about 300 miles south to get back close to Fort Lauderdale airport. We chose Boynton Beach again as our stopover point. We would be leaving in two days so tomorrow would be the last day of birding and we didn't want to waste time driving around.  Tomorrow we would do some repeat visits of spots we went previously.