We started our final day of birding with our second visit to Wakodahatchee Wetlands and traversed the boardwalk once again. Roseate Spoonbills were present this time around as were a pair of Egyptian Geese. 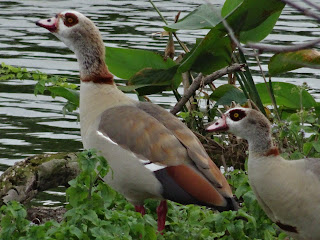 We were able to watch an Anhinga hunting for fish and bringing the food to the nest.


We moved on to visit Green Cay Wetlands from Wakodahatchee. From the parking lot, we stopped and looked around in the tree covered entrance area. We were able to find Black-and-White Warbler, Pine Warbler, Painted Bunting, and Parula, Palm and Yellow-rumped Warbler.
We were getting hungry at his point and decided to skip the walk around the boardwalk and go to lunch. We always make it a point to ask the locals to recommend a good restaurant. Sharon met a woman on the trail and got four recommendations. After looking on Yelp she decided on Dune Deck Mimosa Cafe which was close by. It was tucked in the corner of a shopping center. When we arrived it was very crowded and the customers kept coming and coming. Obviously the locals love it there. The service and food were great.
Afterwards we made a direct path back to Loxahatchee NWR. At the parking lot we heard a Barred Owl calling from deep in the Cypress Swamps. We headed for the dikes to walk around the pools and met up with a guy named Hamilton who we teamed up with for company. At one point up ahead of us we spotted some birds in the Swamp Ferns. They turned out to be Boat-tailed Grackles but in the bushes next to them I spotted something different. The bird quickly disappeared back into the bush but I knew it was a Smooth-billed Ani. So the three of us waited a minute or two and sure enough, not one, but a pair of Smooth-billed Anis popped into view. And to confirm the ID they started calling. How cool is that?


After finding the Ani everything after that would be anti-climatic. At least that's what I thought. Then we heard a flock of incoming parakeets and not being too familiar with the calls I thought they would be more Monk Parakeets, but they turned out to be Nanday Parakeets. Another nice bird to find.
With all that excitement behind us, now we headed a little farther south to a small pond behind the Staples in the town of Sunrise. We knew what to expect here but we came anyway. We found Mute Swans, White-cheeked Pintails, Common Shelduck, Red-crested Pochard, and Common Pochard. This was a pond in a development and apparently someone brought in all these exotic waterfowl. Not only that but if you looked into one of the fenced in backyards they had a peacock and totally white Rhea. I think I would hate having to live next to them.
We spent our last night at a Best Western at the Fort Lauderdale airport and had a celebration dinner with piña coladas at Bahama Breeze.
So that concluded our trip to Florida and we weren't looking forward to coming north to the snow but were looking forward to coming home to our own bed.