Our AirBnB had a nice little screened in porch where we could enjoy breakfast while birding. 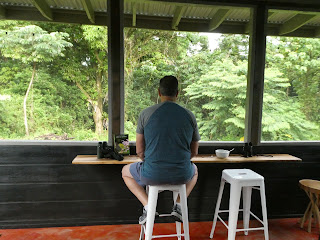 Today we would be driving around the Hilo area and later crossing the island on Saddle Rd, which transects the island between Mauna Loa and Mauna Kea, two of the islands volcanos. A sign on the one-lane road leading out of our residence is shown below. 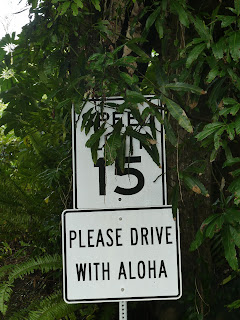 The first stop in Hilo was at the Discovery Center which taught us about the formation of the island chain from the Big Island all the way out to Midway Atoll. They had an aquarium inside which displayed some of the fish we would see later on our snorkeling expeditions. 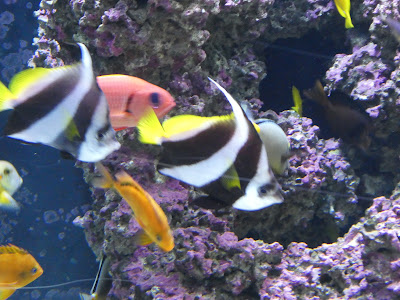 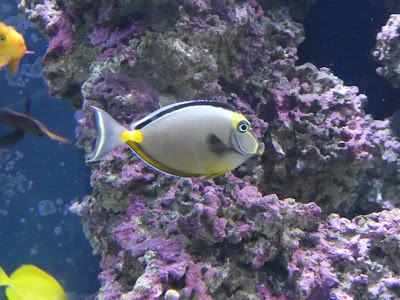 As lunchtime approached we headed to the Ponds Restaurant where the locals all insisted that we eat. It had a nice view overlooking the water.

We were able to get a window seat which had no screens so it really felt wide open. I was able to do some birding right from the table and managed to get a life bird. I found three Nene or Hawaiian Geese across the water from the restaurant.


Even at the restaurant the tropics were splendid and provided a great backdrop.


After lunch, we made the 30 mile trip along Saddle Rd to an elevation of 3500'. We found the Pu'u O'o Ka'umana Trail which had a pullout to park. When we exited our car the cooler temperatures were quite noticable. Even at this relatively low altitude, the temperature was probably 10 degrees cooler. A sign at the entrance to the path warned us to brush our shoes so we don't transport  exotic seeds. 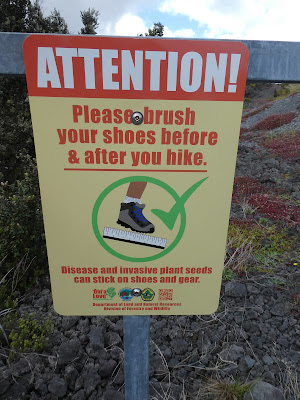 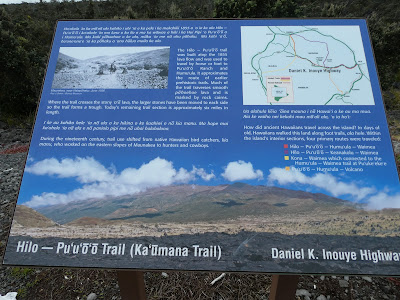 We were here looking for the Hawaiian honeycreepers such as the I'iwi, Apapane, Hawaii Amakihi, Hawaii Creeper and Akakane. Sharon led the way over the lava rock trail which led into the Ohia trees where the birds were located. 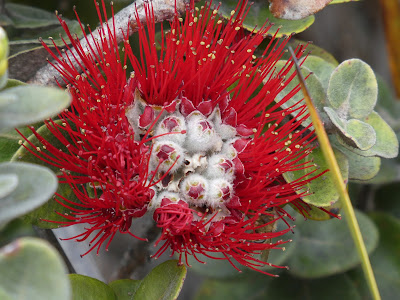 After walking about a half mile we finally were able to see three Apapanes. We were hearing them all around us but were never able to get a visual.


We searched for another fifteen minutes but couldn't find anything else even though we could hear all kinds of songs.  We decided to head about four miles further up Saddle Rd to the Pu'u O'o Volcano Trail, part of the Upper Waiakea Forest Preserve. There we met another birder getting ready to hike the trail. He told us about a meadow which was a half mile hike and said we should be able to find I'iwi there. So off we went. 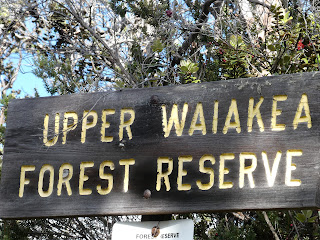 Sharon was having trouble traversing the trail and because the meadow was down a steep path she decided to stay on top and I proceeded onward. In the meadow, I could hear the I'iwi calling and spotted it at the very top of a distant tree.  I got my binoculars on it and sure enough, it was an I'iwi. I was trying to tell Sharon where it was when the bird flew off and headed in her direction. The bird then proceeded to land about ten feet from her and she called to me to come back up the hill. I finally arrived, all out of breath, and there was the I'iwi bouncing around in the Ohia tree singing his heart out. 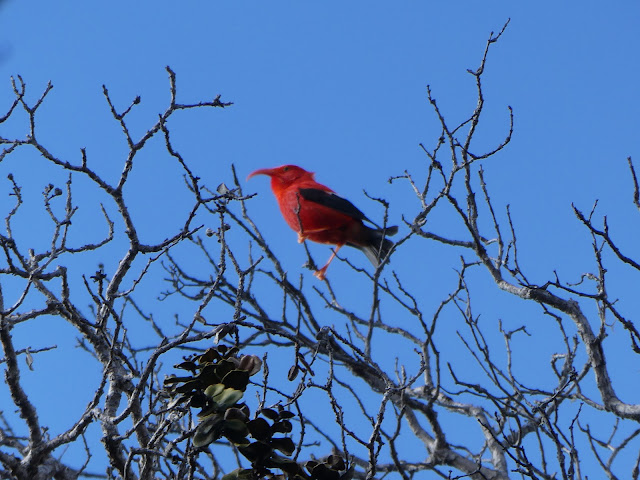 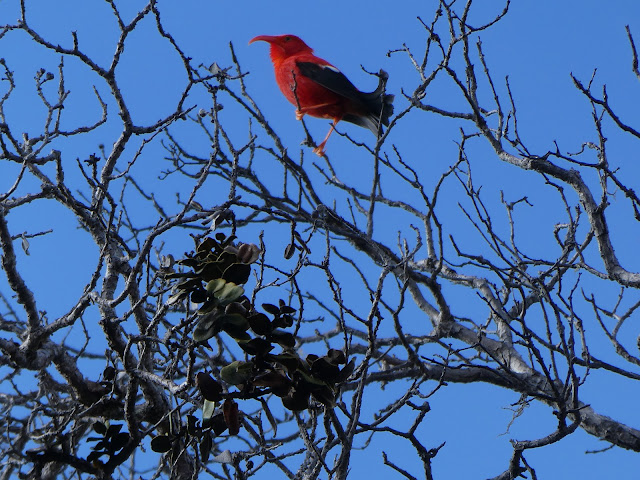 The I'iwi, once valued for its bright red plumage, was collected to make the capes of the Hawaiian chiefs. It is estimated that the feathers of 30,000 I'iwi were used to make a single cape. It was noted that the native boys caught the I'iwi by hiding in the bushes with a curved flower held between thumb and forefinger. When the bird inserted its long bill, the boys pinched and held fast to their prize.

At this point, it was late afternoon and we decided to head to the Mauna Kea Observatory on the volcano summit. This road takes you up to the visitor's center at 9000' and there you park for an hour to get acclimated to the altitude. If you want to continue up to the observatory you need reservations. The trip up to the observatories cost $212 each and you have to ride in their 4WD vehicles because of the dirt road with steep inclines. We didn't have reservations because we both knew we would suffer from altitude sickness so we just strolled around the visitor center waiting for sunset. In the meantime we birded and walked through the garden of silver sword plants which are endangered.


Birding at this altitude definitely reduced the level of species encountered but we did find more Hawaii Amakihis and our only California Quail. I heard a different bird calling that I didn't recognize but had a feeling it was some kind of grouse or pheasant. After much searching and waiting I spotted the bird in a tree. It turned out to be an Erckel's Francolin.


Sunset was quickly approaching and we needed to hike up the hillside to get a good view. Easier said than done. We started at a fast pace but quickly had to slow down due to not wanting to die from oxygen deprivation.
As it turned out there was not a good sunset due to the speedy approach of a thick layer of clouds. After sunset we drove back to our jungle hut to await tomorrow's adventures. 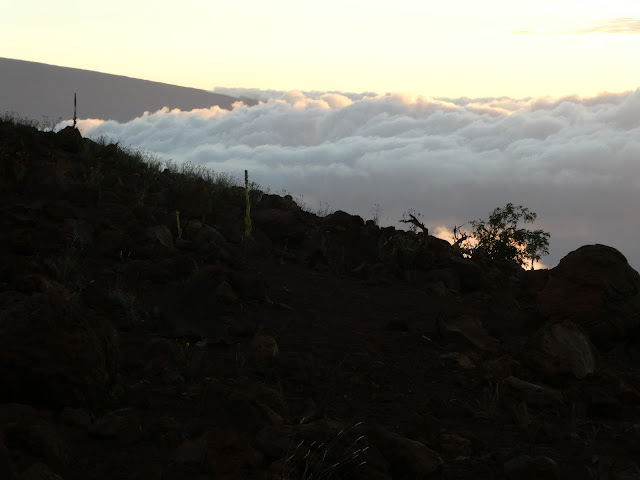 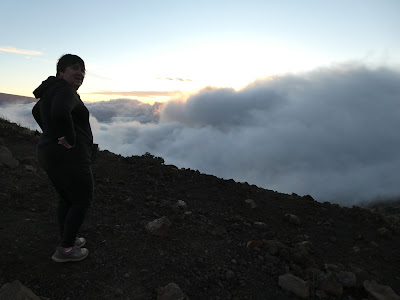